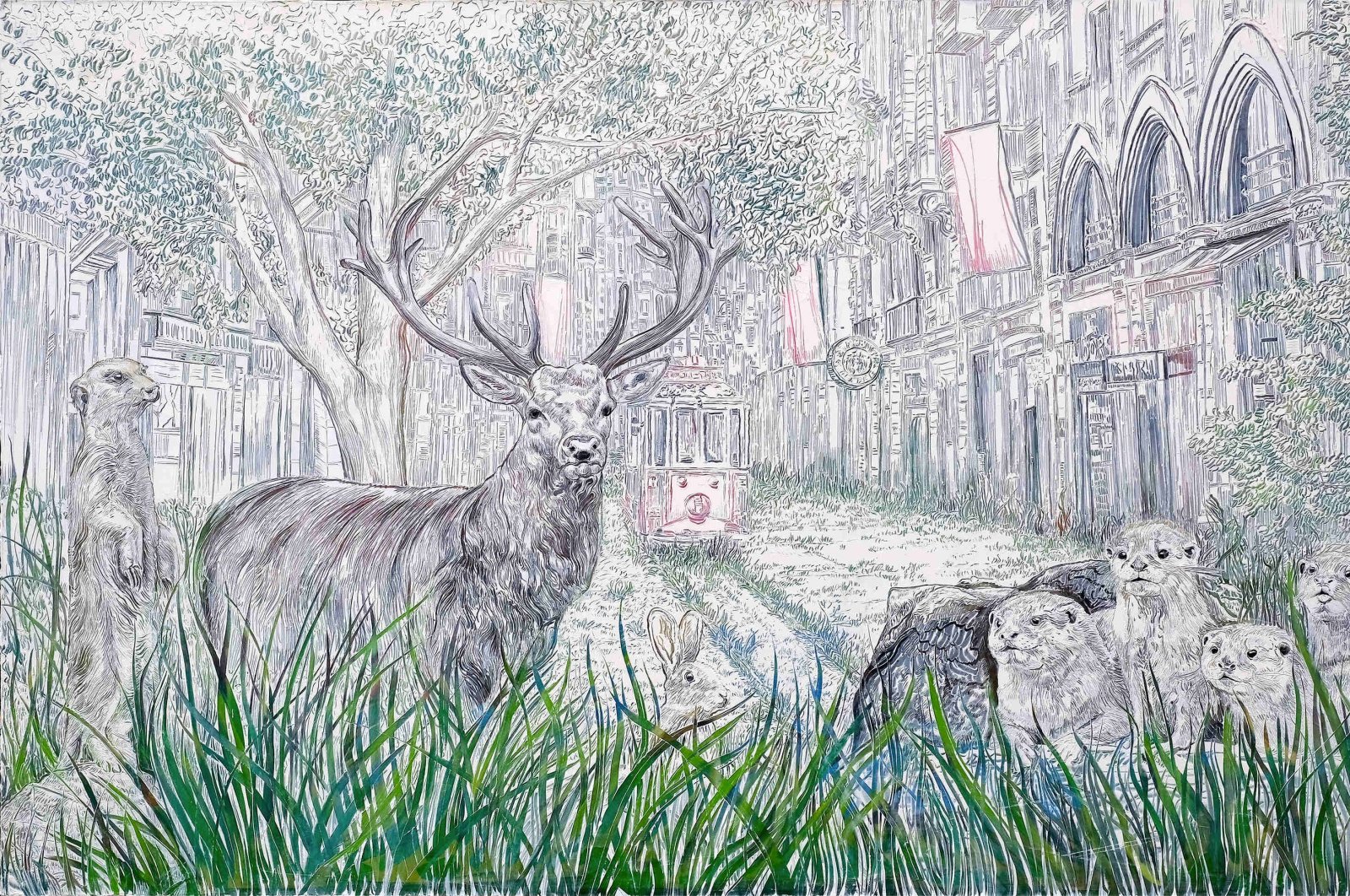 Inside the vibrant, cutting-edge white cube of Ferda Art Platform, an apartment gallery in Istanbul’s Teşvikiye neighborhood, a new series of oils by Seydi Murat Koç are accompanied by a pencil drawing and mixed media installations

A buck is flanked by five meerkats and a rabbit. Under its impressive antler spikes, and from its wise, black eyes, it stares back at the painter as he morphs thickly lathered white oil with a technique that integrates elements of drawing and engraving. Seydi Murat Koç is confronting his imagination of life in Istanbul following the worst-case scenario for humanity. Unpeopled, and overgrown, his scenes of Istanbul are freshly green, shot through with the illuminations of an ecology rejuvenated to the fullness of its original, natural state. The land of the abandoned city teems with plants and animals, and yet, they have newly returned.

The canvas is titled, “The Day After Series 3” (2021), and it shows a bucolic, verdant Istiklal Avenue, without the tourist shoppers and their bags and crowds. The famed trolley has stopped in its tracks, which are sprouting with multicolored grass. In the painting, the sky is not visible, but a powerful degree of light suffuses the landscape, as with all of Koç’s canvases in his solo show, “The Day After”. The turn-of-the-century Greek-owned buildings of downtown Istanbul are detailed with special finesse by Koç, who is an adept draftsman. His work, however, rather than dystopian, is conceivably optimistic.

“The Day After” goes beyond the extent of forewarning, and offers a glimpse into a world that has healed from the overpopulation of its formerly predominant species. It could be seen as a psychological gesture, in that sense, toward a vision of planetary existence in which the stresses of continuity, of lurching toward progress by force are relaxed, or released entirely. By his technical approach, specifically his lavish use of white paint, Koç has affected a photographic exercise in color positivity, reversing the transformation of the negative so as to show the permeable brilliance of form, when the artificial becomes naturalistic.

In terms of art history, the paintings of Koç bear a post-impressionistic air as the swirling fields of Van Gogh are traced over the aftermath of Istanbul’s human extinction. Another piece set on Istiklal Avenue, “The Day After Series 7” (2021) zooms out to reveal a flowing, cloudy atmosphere, mirroring the shapes of the treetops. Within the mass of whitened green tufts, as leaves meld and merge like water, the red trolley is immersed, unmoving in the middle of the pedestrian road lined with empty buildings. Koç, with his prolific use of white, has a fine sense for its spectral reflectivity, and so, employs yellows, blues, purples lucidly.

On time and land

In his vision of the post-apocalyptic future, Koç paints as a comment on the longevity of architecture and art, which, in his environmental utopia, outlives humanity. What remains are figments of ideal beauty, the abstractions of plant life commingling with degradation as beautification. And yet, within one particular piece, “The Day After Series 13” (2021), a classical Grecian statue emerges from patches of silvery, frosted flowering plants overlooking a serene stretch of the Bosporus. There is also, on the horizon, the pale semblance of a mosque, overcast with milky cloud cover.

The sculptural imagery is echoed in the sole drawing at the show, a piece made with pencil on paper titled, “The Day After Series 15” (2021). Another Greco-Roman statue has surfaced in the inner-city wilderness where one of the suspension bridges lunges over the Bosporus, eerily empty. It is in the drawing where the titular concept, “The Day After” is clear, as a flag still waves in the background of the scenography that Koç has visualized with the astute eye of a witness to the end of human presence on Earth, or at least what it might look like considering the opportunities that have arisen in the face of global lockdowns.

Koç has essentially color-coded the evolutionary pattern of ecological entropy, in which green is the all-encompassing, oceanic principle that swallows and redirects industrial citification and, for that matter, figurative modernism in art, back to a primordial state of naturalist abstraction. Such is the case with his canvas, “The Day After Series 2” (2021). A car has been abandoned on the side of the road, and is disappearing into a wave of vital hues, emerald and lime, against a pinkish cityscape contrasted with a cloudless azure. Although made with oil paint, the meticulous detail is every bit as focused as a line drawing.

For all of its post-human timelessness, certain pieces in “The Day After” convey a sense of historical logic and narrative, as well as emulating a scientific study in the fields of biology and geology. Whether an extraterrestrial observer, or an archaeologist of modernity, Koç is, like a seasoned writer, savvy in the wisdom that showing is more potent than telling. His canvas, “The Day After Series 18” (2021) striates the subterranean depths below the roots of a tree, including rectangular objects, fragments of a commodity chain or urban infrastructure, surreal in their juxtaposition with vibrantly colored flower petals.

To flower and bloom

The symbol of a flower speaks to the full expression of being, the manifestation of inner life into that which is perceivable to others. Koç cut a series of canvases in the shapes of flowers in bloom, emphasizing the completion of their forms, bursting and rich with color and nuance. Their aesthetic balance against the whitewashed walls of Ferda Art Space makes for a harmonious curation.

With four paintings, “The Day After Series 9-10-11-12” (2021), presented cumulatively, Koç exposed the layers of his work. Like pulling back a curtain, he demonstrates the use of white paint as the catalyst that moves his work from natural realism to post-impressionism. “The Day After Series 9-10-11-12” pictures varicolored flowers before and after they are overrun with white paint so as to prompt the imagination of their appearance and context.

Outside of the canvas, Koç explored mixed media pieces, such as “The Day After Series 14” (2021), of a keyboard, hanging on the wall. It has become a lawn, as grass shoots up from its keys, rendering the seemingly lifeless computer part as animate, fertile and alive as the soil of earth. Koç blended his work as a painter with that of his sculptural installations for the piece, “The Day After Series 4” (2021) on which a polyester fawn is lifting its head skyward, as its hooves are linked to a wreckage of spindly junk resting on a pile of brick, stone and sand. The striation, peaking with the beauty of life, colorful and naive, is, finally, a cathartic meditation on the life-affirming course of nature, despite the often harrowing perspective of life as a species on the brink of survival.