Baksı Museum exhibit focuses on how masks have changed world 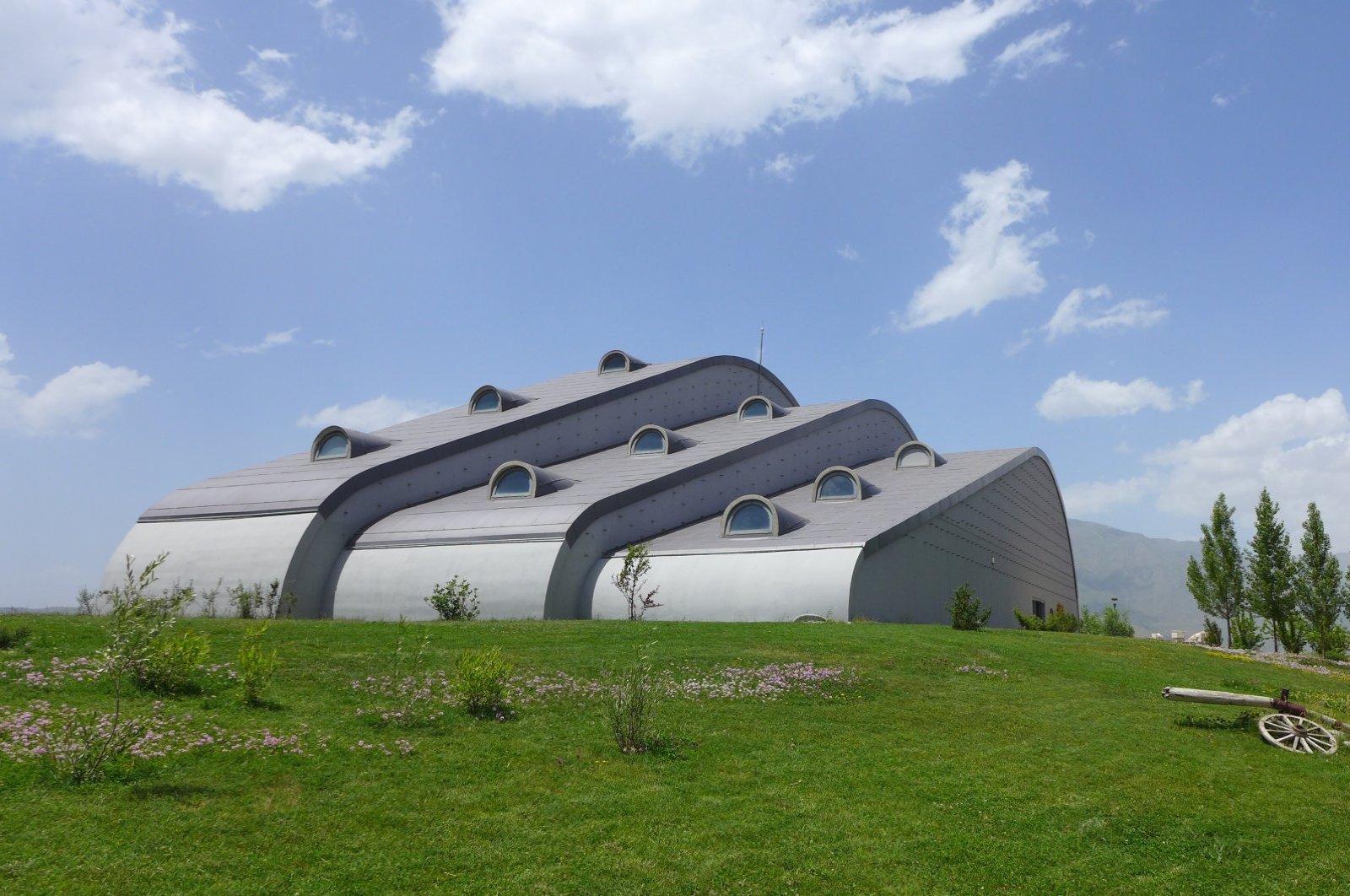 When the coronavirus pandemic took over the world, it naturally affected the arts, which tends to be a reflection of society. Rwandan artists joined forces to graffiti and paint murals to create awareness about health protocols. Others like Banksy honored health care workers within their pieces. In a similar way, Baksı Museum in Turkey's northeastern Bayburt province is hosting a group exhibition with 20 artists and designers' interpretation of a mask.

Board members said the idea for the exhibition emerged as they discussed the symbolism a simple mask can convey. “Today, perhaps, the mask is on the agenda and in our daily lives more than ever before. We are striving to communicate behind our masks. At the center of our lives are masked conversations, masked meetings and masked farewells. That is why we wanted the mask to be sized as a concept at the same time and to be the subject of creative activity with its connotations in artists and designers. We called on a group of artists and designers to interpret the mask in the broadest sense. In this way, we aimed to expand and enrich the perception of this object,” the committee said about the exhibit.

Artists and designers participating in the exhibition have approached the subject of masks from different standpoints. An array of materials and techniques have been implemented from photography, performance art, furniture, canvasses, Lego structures and even burial clothes to tackle themes such as the alienation of the individual to the dead ends of the system.

UNIQKA's design titled “Öz” (“Self”) is a dystopian piece representing people dressed in masks who cannot see, hear, speak or think but eventually end the dystopia by getting rid of the mask.

In his furniture design titled “Ister Uzak, Ister Yakın” (“Whether Far or Near”), Berker rejects the notion that a mask is a tool of protection but rather approaches it as an object of comfort associated with positive memories by presenting it as two intertwined coffee tables.

Erol’s “Love Mask” is a little different from his peers' work. Breaths, smells, sounds and eventually, souls intertwine as if a single heartbeat can be heard in two bodies in this piece.

Karavil's design “2020.313” focuses on a voice that speaks behind the mask, inspired by the Apple Watch's voice command feature and on possible communication scenarios in the future.

Özgür has explored the effects of COVID-19-related domestic confinement on creativity with a series of photographs. In the work titled “Lockdown Diary,” the artist has rearranged all existing objects in his own home, turning his personal space into a performance space.

Engin's “Otoportre 2020” (“Self-Portrait 2020”) is a digital photograph of the artist beneath a neo mask depicting life now with a nod to the future.

In his design called “Akıṣkan Yapılar, faz 20, isimsiz” (“Fluid Structures, phase 20, anonymous”), Logie points out the shortage of materials brought about by the lockdown by masking his previous works and adding new layers to them.

Bülbül dedicates her “Fanustaki Çocukluk (“Childhood in the Glass Lantern”) to children who, instead of playing outdoors, have the best time in a glass lantern at home. She has also produced a Lego mask for children whose life's focus is now on safety rather than toys.

In her design “Tel Maske” (“Wire Mask”), Gökçe utilizes wire because of its color, texture and the process used to create it as a metaphor for life with. She has created a mask using the filigree technique (the most delicate technique to work precious metals) within thin dashed lines meant to draw parallels to the line between life and death.

In her design “GetmePPE,” Onar has chosen to draw attention to the disposable economy and the fleeting memory of humanity. She hopes to make the viewer question how we have reached the point we are in the world today with masks that she has shaped out of glass and presented as if they were thrown on the floor.

Horasan has exposed the connotations created by the mask through an oil portrait called “Yüz Her Şeydir” (“Face Is Everything”) while Boynudelik's canvas work titled “Merhaba Yabancı” (“Hello Stranger”) deals with the situation of the urban individual being masked and being foreign to himself and the other.

Önürmen has used the mask form as a metaphor in “Beyaz Mask” created with acrylic, forex, metal screws and iron rods on a wooden board, emphasizing the fragmentation and paranoia of modern man, as well as the relationship between technology and the body and his dilemma in the face of the system.

In “Bayburt Ejderhası” (“Bayburt Dragon”), Süer has integrated the mask into the exhibition. She has embroidered the serpent-dragon image, which is the subject of fairy tales and legends in the region, on ehram, a local weaving.

In “Perde” ("Curtain"), Berg interprets an embroidered piece of felt fabric as a mask with a feature that conceals what is on the back.

In "Someone," Işmen touches on the lower selves behind which we hide and the identities we assume, the lies we tell and the unlived experiences.

Imamoğlu's “Maske” (“The Mask”) portrays a mask as belonging to the world as one entity and the pandemic as a test of the limits of human tolerance.

Kavukçu has moved from the basic qualities of the mask such as protection, hiding, concealment, emulation and ritualism and created “Makeleşme” (“Becoming Mask”) with the visuals of a performance.

In “Göze Göz” (“Eye For An Eye”), the black and white colors of the paper correspond to the metaphysical experiences between life-death, presence-absence, pen-paper and besieger-besieged.

The various interpretations of "Masks/Connotations," which is organized in conjunction with the 20th anniversary of the Baksı project, can be seen in person at Baksı Museum and on the museum's website until May 15, 2021.