On creativity and the past: A curation of 6 artists 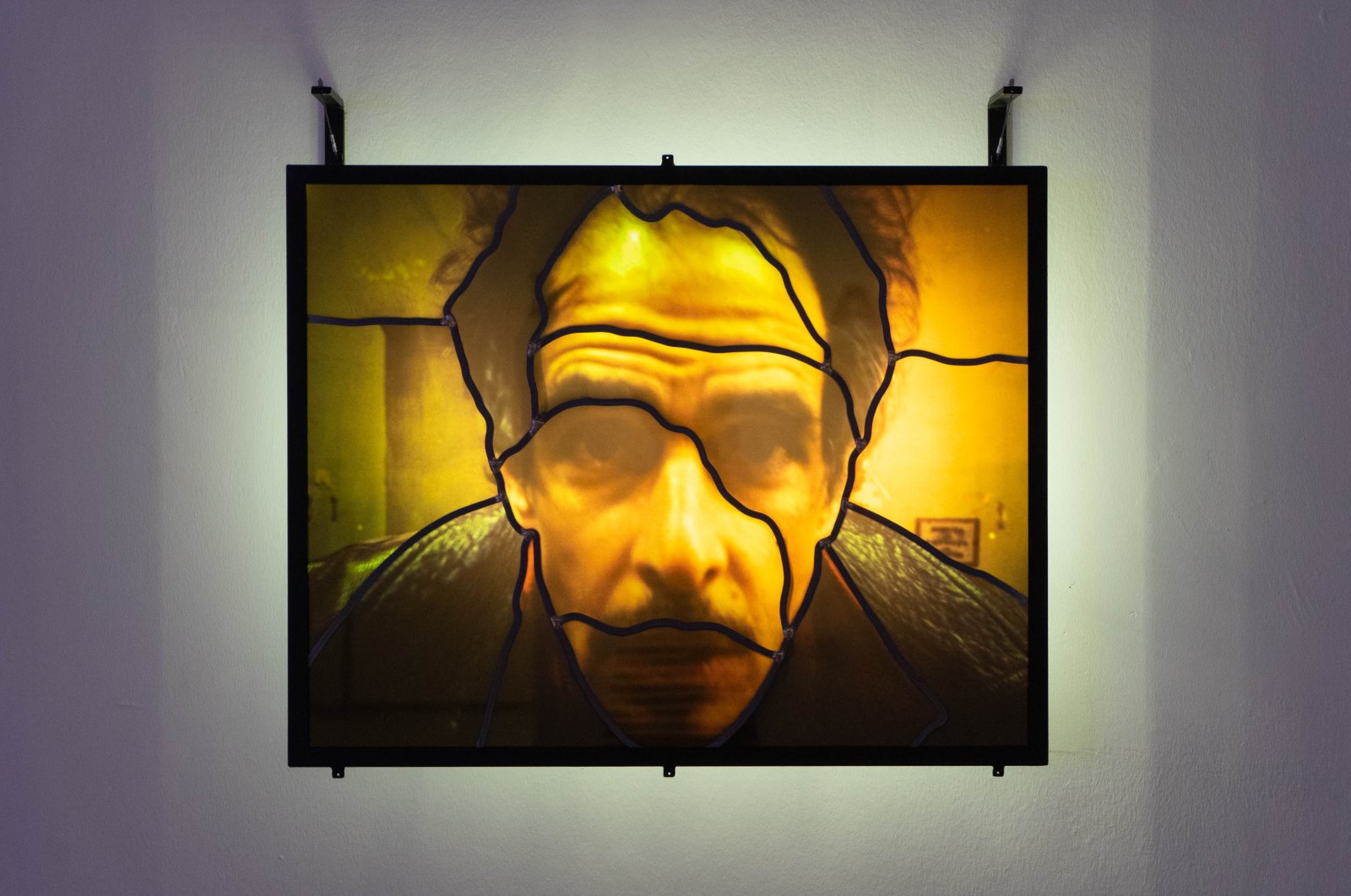 At Akbank Sanat, the exhibition “6 Artists in Search of a Precedent” is a detailed curation by Hasan Bülent Kahraman, whose distinctive eye for contemporaneity spans new and posthumous works

Sarkis has put his unmistakable, mustachioed visage back together, applying methods of stained glass and the Japanese pottery technique of “kintsugi,” literally translated as “golden repair.” Thin, and young, from his earlier days ripe for the streets of Paris, he stares back into time from the installation of lead, steel and LED. It is, titled, “V 06” (2012), one of only a pair of editions from the Rabia-Ali Güreli Collection, chairpersons of Contemporary Istanbul.

“V 06” appeared recently at Dirimart, a prestigious international gallery, often showing German and American artists alongside Turkish innovators. Using pieces of stained glass as “kintsugi,” Sarkis effected a kind of Christian nostalgia for spiritual tragedy, imbued with a Japanese accent on impermanence. The piece looks across the institutional, whitewashed hall at a neon-lit installation by Fırat Engin.

“Frequency Series I,” by Engin, includes a polyester frame, wood and decota, which is a polyvinyl chloride foam sheet. The neon, frequently employed by Sarkis, makes a number of appearances in the show “6 Artists in Search of a Precedent” as it emanates with the passage of time. The pinkish-blue hue reflects off a darkened space that would otherwise house a mirror within its oval frame, elaborated with floral designs in metal.

Engin’s work dominates the immediate visual field in the entrance room of “6 Artists in Search of a Precedent,” particularly his installation, “Istila,” which is, “occupation,” or “plague,” in Turkish. It is essentially comprised of polyester coffee cups, grande-size, painted in a subdued gold. Some of the cups are knocked over, perhaps to communicate a context in which material that is trashed comes back to haunt the world, in a more malign form.

The first law of thermodynamics, also referred to as the Law of Conservation of Energy, states that energy cannot be created nor destroyed. In that sense, the deluging proliferation of coffee cups is analogous to the rampancy of free-market capitalism in confrontation with the prevailing era of the global pandemic. The floor is taken over by the useless objects of waste at the end of which Engin installed, “Breath IV” (2017), a found broken window, an apt symbol.

Nod to the select

The curatorial choices of Kahraman are suggestive of broad, historical influence within the present, cultural moment. The placement of an object in the intellectual laboratory of a public art exhibition has the potential to grab unsuspecting eyes and make them realize that, simply by seeing that they may open doors, that lead to doors, unlocked and waiting for new entrants. That is just the effect of “Carpet with Horses” (1986) by Gülsün Karamustafa.

The artist’s reputation precedes her, where, with younger artists at the show, they are preceded by their predecessors who made art history in which their works are situated, or advance toward some unforeseen, critical horizon. “Carpet with Horses,” to the weary and untrained, might appear naive, unworldly and even random. But its collagist emergence through the materials and figurative display conveyed are couched in perennial intrigues.

Karamustafa received her passport in 1987. The year she created “Carpet with Horses” was her very last confined to Turkey. Apparently, she had been focusing on rural migrants, and their culture, which would explain the rather kitsch piece of carpet craft. Another female artist who works with textiles, Güneş Terkol, is curated alongside the piece by Karamustafa, only Terkol’s installation, “Holographic Record” (2014-2020), has a more directly complex tone.

Eight pieces of double stitched fabric hang suspended from the ceiling, floating in the interior air. They show human figures carrying signboards, as walking advertisements on the corner of certain inner-city roads in the United States. And in the background, a projection animates the cold rattle of metal fencing, and a textile piece, like that physically in the room, swaying in the wind on what looks to be a sunny, winter day.

A blast of electric light bursts through retinas upstairs, on the second floor of the Akbank Sanat show, “6 Artists in Search of a Precedent.” And approaching the hybrid piece of neon, carpet, wood and plexiglass by Ramazan Can, titled “Feel at Home” (2020), there is a warmth that can be felt. Its crimson-purple luminosity is almost palpable, as the artist reconstructed the intricate weave of a traditional Turkish carpet with glowing neon tubes.

Can has subverted ordinary perception with his distinctive material fusions, which touch the nerves of life in Turkey. His piece, “Attic” (2017-2018), merges concrete and weaving over 35 unique pieces. “Attic” could be seen as the upstairs corollary to Engin’s “Istila,” exploring the spread of both concrete, as basic to the widespread construction zones of Istanbul, and woven carpets, a key part of Turkish national consciousness.

“Attic,” however, facilitates curious insights, where the concrete and weaving interact, as the woven material fades, piecemeal, fragmented and nonexistent over some of the bare, rock cubes. The use of carpets and empty space is curated, in direct line of sight with “Attic,” in the piece “Untitled” (2019) by Şakir Gökçebağ. It is of a carpet that has been cored, a circle cut out of its center. But the circle is completed outside of its frame.

Through artists Burcu Yağcıoğlu, Murat Akagündüz and Alpin Arda Bağcık, Kahraman has curated with a deepening sense of blur, or the perceptibility of transience in the objective spatiality of two-dimensional works. Yağcıoğlu, integrating a skeletal jaw, also included a video and drawings of pencil and acrylic on paper. These defy gravity, as a swimmer floats under a marine sky upside down, and the chaotic atmosphere swirls like a living organism.

Akagündüz, using graphite material on paper, explored abstract washes of nebulous transparency, multilayered with varying degrees of density and technicality. In 2016, the writer Aslı Seven curated a show of Akagündüz's works at Arter, titled “Vertigo.” In the catalog essay, she wrote: “The intangible movement of light between the shades of white never relinquishes the possibility that this meaning reached by a gaze ‘stretched’ in time, might, at any moment, slip away and disappear into the void of an endless abyss.”

The curatorial decisions that Kahraman made to exhibit works by Avni Lifij, who died in 1927, or Semiha Berksoy, born in 1910, round out the exhibition as encompassing almost the entire breadth of modernism in Turkish painting toward a renewed grappling with issues that have prevailed since, yet, to contemporaries, might seem utterly unprecedented. These artists are in search of a precedent, after all. And what Kahraman is perhaps asking is whether or not the world of art-making can be presumed to follow the first law of thermodynamics.