On earth in spring: New paintings by Mahmut Celayir 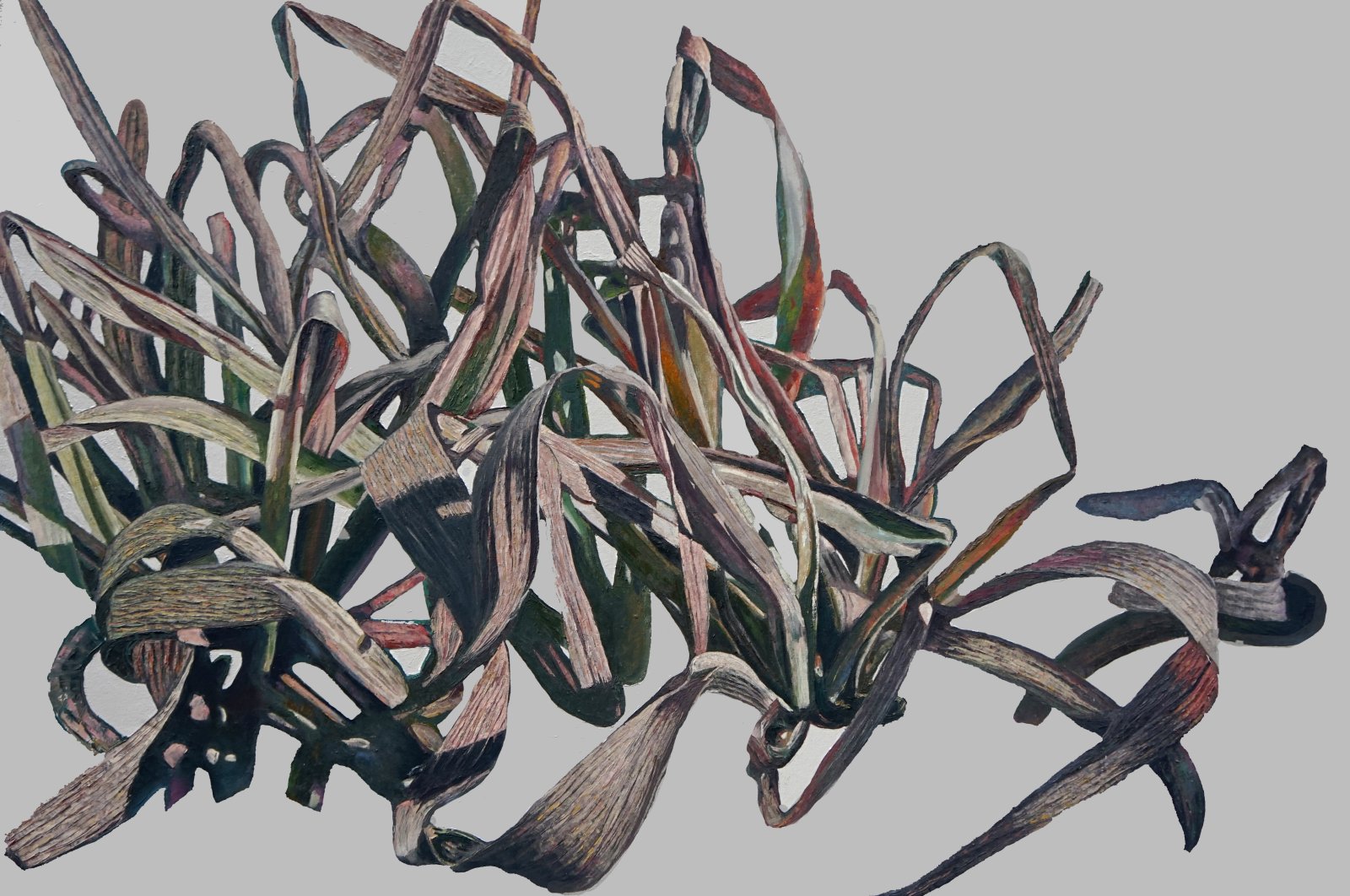 At C.A.M. Gallery in the fashionable Istanbul neighborhood of Çukurcuma, the seasoned painter Mahmut Celayir explores the depths of his regional adoration, focusing on a peculiar plant called Yelıng

As the snow melts, the ground reveals itself in the bloom of life, that although once having been obscured by the disappearing act of winter’s passing, its vital roots burst with movement and color, offering those in its midst the chance to enjoy the nourishments of its biological makeup, and the merrymaking metaphor of its return. In the high mountains of Turkey’s southeast, there is a plant, that to locals is known in their language of Zaza as “yelıng,” an auspicious variety of herb, esculent and ripe for all manner of culinary effect.

But the longing that people feel for yelıng is not merely on account of the extraordinary taste it adds to soups and pastries but because it is a harbinger of seasonal change, effectively serving as a kind of earthbound indication that the cold, silent months at the end of the year have come to a close, given way to all that is new, vibrant, alive. To have an object by which to express such collective ebullience is characteristic of traditional societies, and there is a special sweetness to the meaning that a plant holds for people still in the 21st century.

Celayir, who hails from the mountain settlements of eastern Bingöl province, has ever drawn from the stretches of wide, open, ascending plains, the fields where Alexander the Great walked to meet the Babylonians and where today, world history is engraved, deep into the bedrock stone of planetary memory. As the pages of official record flutter, kept to the letter in the storerooms of Western civilization, there remain the multigenerational witnesses whose voices, however, echoed, are heard at a distance, far-flung from the cores of social industry.

Yet, Celayir, with a particularly postmodern painter’s eye, extends his vision, as a local abroad, in concert with global attention, and by his yearly homecoming, traveling from Germany, where he also resides, to tap the source of his inspirational fount, in the landscape where he first opened his eyes. For that reason, beyond the art world itself, his work is uniquely valuable as a bridge for seers in Turkey to gather some of the bounty of the country on which they stand, poised to appreciate its multivalent cultural and ecological diversity.

The exhibition of paintings, “Yelıng,” at C.A.M. Gallery, is a welcome window to the wider world, sheltered within a snug commercial outfit along the winding, steep slopes of cobblestoned streets in Istanbul, in sight of Galata Tower, and surrounded by antique shops. And as a tasteful autobiographical gesture, encompassing the career of Celayir, C.A.M. curated a series of six serigraphy works from 1997, in which Celayir was studying the shape and texture of the Bingöl Mountains, that, in Turkish, are known for their “thousand lakes."

To paint is to grow

Celayir is every bit a nature explorer as his ancestors yet equipped with a formidable talent as a seer himself, robust art education and a career-long venture in the world of contemporary abstract painting, his is a different acuity of sight, one that sees, perhaps, through and out of the span of nature in which his visual ideas foment. It does not take an expert art enthusiast to notice a parallel in the forms of representation between the histories of naturalism and abstraction in painting.

For his latest series of works, “Yelıng,” Celayir reconstitutes that coincidence of abstraction in naturalist painting with a subtle, distinctive eye, integrating his time-honored techniques, such as collagist texturing, and a kind of pointillist color scheme. His canvases essentially show stretches of ground, worn with patches of yellowed and discolored leaves, thawing out in the free, warming air of spring. It is a time of revelation, of exposure to the elements, and most strikingly, to light.

Such is the pastiche of earthly manifestation, as in his work, “Organic Cosmos” (2020), in which there are touches of frost over the surface of the thawing leaves. It is perhaps a nod to the exhibition run of “Yelıng,” which will end just before the true beginning of spring, but, like the plant of its muse, hints of a time to ensue, in the near future, in which the activities and moods of the people shift, repositioned against the heat of the sun. For the opening piece, “Hora” (2018), shown in the window at C.A.M., the wintry clouds have yet to pass over the hills.

“Yelıng” is basically comprised of two variations on the landscape, in which the painter is looking directly at the ground and secondly, conceivably holds up the yelıng plant as a specimen, contrasted with an empty background. The latter depiction of nature is a departure from Celayir’s otherwise condensed compositions, in which the canvas is entirely filled from end to end with richly overlapping colorations and varying shapes. His palette, however, remains similar, with generous usages of yellow, green, white and red.

As his works change, so does the passage of time, as the frost thaws over the series, “Organic Cosmos” (2020). In that way, nature proceeds deliberately, incremental at first, seemingly little by little, until the superficial canvas of sensual display blows over and suddenly, the would-be observer is fully immersed in an entirely different plane of perception and experience. It is an interesting transformation, considering Celayir’s revised perspective, from within the landscape, to an objective outsider, as it were.

As a biological curiosity

In one of the “Organic Cosmos” paintings at C.A.M., Celayir crafted the end of a shoot from the yelıng plant, as it appears, sidelong, over a flat, exposed patch of earth. It is dotted with ruddy greens and orangey vegetable decomposition, an utter delight of a post-impressionist oil painting. And there are four canvases that frame bundled tangles of yelıng shoots, folding in on itself, swirling around with multiple degrees of upturned rotation, like something out of a Baroque portrait, in which the train of an elegant dress floats mesmerizing into the corner.

For a critical foray, however, a question remains as to the intention of Celayir in objectifying the beloved plant of his home region. It could be a comment on his separation from the land, a self-referential meta-expression of his work as a painter who has come to see his birthplace in relation to the uprooting he has known living in Germany, returning to the mountains of Bingöl with the nostalgia of exile, not entirely unlike the traveling biologists who took up skills as herbalist draftsmen in centuries past.