On organic abstraction: A group show at Öktem Aykut 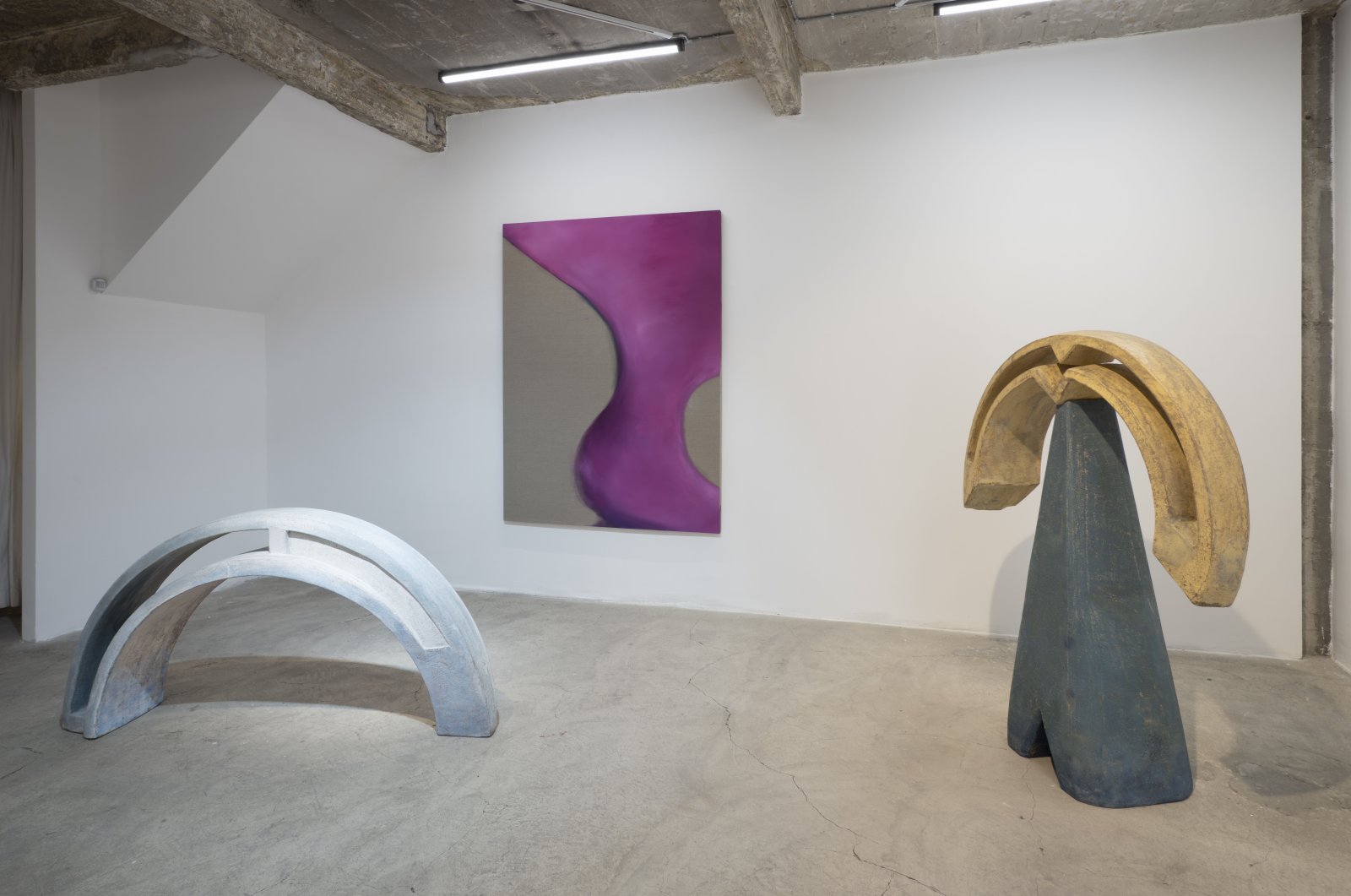 An installation view from "Trunkless" at Öktem Aykut shows works by Koray Ariş and Aret Gıcır. (Courtesy of Öktem Aykut)
by Matt Hanson Feb 08, 2021 11:06 am

A show of works by Stijn Ank, Hasan Deniz, Camila Rocha and others revolves around the sculptures of Koray Ariş, whose oeuvre represents an eccentric offshoot in Turkish art history, returning from obscurity

The dust of a new installation had not yet settled in the air of the spare, modest interior of Öktem Aykut. In between its concrete walls, a photographer opened the legs of his tripod and stood in front of a pair of sculptural works by Koray Ariş, one of which sprouted with a symmetrical impression akin to palm fronds, colored in a subdued tawny yellow, over a murky, green pedestal that extended down to the floor like an isosceles triangle.

Beside the arboreal conception was a semicircular shape, its rounded line hollowed and incomplete, standing with two legs, grounded. The rustic, cerulean hue of its surface bore a resemblance to the dry, warehouse-like effect of the space in which it demanded attention. The photographer was not looking at the sculptures, however, but through the doorway to the street.

On his right is another circular work, painted with a ruddy, whitish hue – an empty, circular object laying on the body of its curved line. Ariş appears to have tested the definitions of dimensionality by manufacturing otherwise abstract, theoretical figures as physical, even aesthetic fabrications. The widening base of the circle turns upward to a crick, in which it also conveys the equally supernatural abstraction of the right angle.

There are works mounted on the wall that surrounds the centerpiece exhibition of abstract sculpture by Ariş, who worked in Rome in the early 1970s under the auspices of a state scholarship. He was groomed to be a proud representative of Turkish modern art, yet, when he returned to Turkey to work as a professor, his creative and professional affinities veered sidelong. For decades, he has remained generally antisocial and obscure.

The gallerist Tankut Aykut, who along with partner Doğa Öktem is one of a pair of young, upward-looking founder directors at their eponymous gallery, Öktem Aykut, has a personal investment in the life and works of Ariş, whom he has known throughout his career. Long represented by Galeri Nev, one of Turkey’s oldest contemporary art galleries, Ariş is a staple of reference along the lines of potential variations on where Turkish art could have gone.

His contemporaries, such as fellow abstract sculptor Seyhun Topuz, also at Galeri Nev, are arguably overshadowed by their immediate predecessor, Ayşe Erkmen, whose early works in abstract sculptures, since 1969, were on display at the prestigious reopening of Arter as Turkey’s flagship contemporary art museum. Erkmen, however, traversed an alternative path which further distances Ariş from the center of critical and commercial admiration.

Öktem Aykut, however, under the passionate curatorial initiative of Aykut, for their current group show, “Trunkless,” has contextualized the works of Ariş anew, as persistently and internationally relevant as ever. In a retrospective catalogue book published by Galeri Nev, Italian art writer Antonio Del Guercio reflected on his meeting with Ariş, whom he later curated in Rome. Guercio defended the effect of Italy on Ariş, comparing his work to late Roman reliefs.

He wrote: “Koray’s works constitute concrete evidence of the possibility of materializing an artistic creation which is modern ... And I want to emphasize once again that these gifts or qualities have their very roots in a ‘historical memory’ not superficially exhibited but inherited from the ancient ‘know-how’ of thousands and thousands of anonymous people who worked on those lands from the times of Constantine to the Byzantine era and up to the Ottomans.”

There is an oil on canvas in between the two sculptures that stand, side by side, in the main, ground floor hall of Öktem Aykut. The swaying contours of its pink body meander out of the frame of the canvas like an aurora borealis in intimate opposition to the more earthly, anthropocentric fixtures of Ariş. The painter, Aret Gıcır, is an Istanbul-born Armenian artist.

Gıcır contributed a compact work of oil on paper, figuring the head of a black dog, reclining and stretching over a bleary, purplish-red background. It is a dizzying, dark portrayal of animal life. The piece, “Dog” (2016), is curated next to a few delicate specimens of embroidery on fabric by Emel Kurhan, careful studies of feathers against blank beige, chairs in clouds and a leaf encompassed by two subtle shades of textile.

The art of Kurhan has a special resonance with that of postmodern naturalist drawings by Rocha, who spent much of her earlier artist career in the field of abstraction, and now, from her home in Brazil, has crafted works that might easily be confused with anachronisms out of the notebook of a 19th-century herbalist. Yet, her poise has an air of experimentation and curiosity that charms its thinkers beyond historical criticism.

Rocha followed a path as an artist that could be seen as diametrically juxtaposed with that of Ariş, with the latter pursuing figurative naturalism to organic abstraction, while the former did just the opposite. Rocha also made a personal mark on Turkish art history through her marriage to the late artist Hüseyin Alptekin. Yet, Rocha is a formidable creative intellectual in her own right, as is lucid in her watercolors of Peruvian cacti, orchids and untitled flora.

The abstract, sculptural works of Stijn Ank are a vocal addition to “Trunkless,” as such pieces as “14.2015” conjure a flowering mold across the room from Rocha’s realist precision. Yet, it might appear that there are multiple narratives of production and appreciation from artist to artist, and that their correlation requires a quite venturesome leap. The taste for abstraction in northern Europe is perhaps distinct from that of Turkey.

As a Belgian artist who has also worked in Rome and Berlin, Ank developed nonfigurative abstract works that can be enjoyed as flat streaks of color – pigmented plaster over a metal structure surface. But their aesthetic is not altogether divergent from that which Gıcır affected with his more traditionally employed oil on canvas. From the perspective of passing eyes, the presence of Ank’s works makes for a peripheral curiosity.

In abstraction, the sense of representational ambiguity flirts with the temptations of formalism and the risks of vagueness. Ank, in such works as “07.2018,” may have created a scene interpretable as a landscape my those select minds prepared to make the effort to do their own imagining, but to the more blunt observer, the faded smears are as unidentifiable as they are indigestible.

In his official biography, Ank is said to navigate the relationship between matter and void, as between the sculpture and its surrounding space. With that reference in hand, it is apt to describe such a contemporary art exhibition, in the midst of local and global concerns, according to the title of the Öktem Aykut curation: “Trunkless.” While pointing upward to a beautiful horizon of creative futures rooted in history, the heart and weight of the matter are lost.