Once in Stuttgart: Video trio by Nevin Aladağ 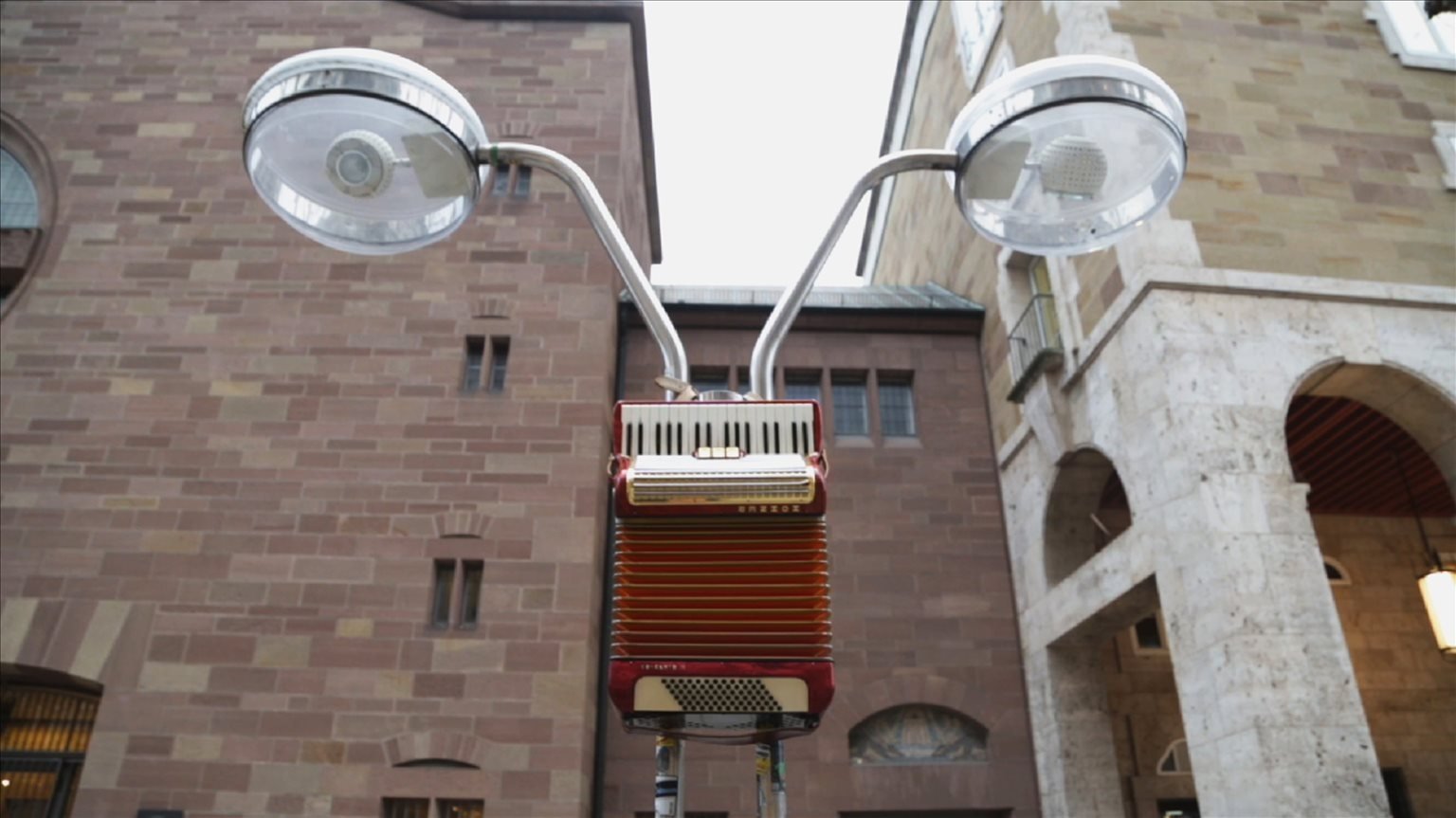 A three-channel video installation by Berlin-based artist Nevin Aladağ, titled “Traces,” trains the eye to a childlike perspective of Stuttgart, where musical instruments intervene amid the playground of urbanization

An accordion buzzes, hums and drones, played, as it were, by a model ship situated on a city street. The amalgamating amusement of movement jiggers back and forth at a regular rhythm, and the multidisciplinary instrument is tied to a fixed pole. As the pulsing sound patterns on to effect, the dichotomy between diversion and utility is pronounced, wordlessly, by Nevin Aladağ’s strict, cool videography.

Edited with an exacting sense of aural engineering, the ambiance that "Traces" creates is that of an avant-garde composition attuned to an art history in which music and objects intertwine toward a broader context of the meaning and experience of listening. But Aladağ goes further than the crew of the artistic movement Fluxus who, under the genius of such figures as Nam June Paik and John Cage, entertained an open ending to the multimedia of 20th-century modernism.

In that way, “Traces” complements the concurrent Arter exhibition, “For Eyes That Listen,” curated by the particularly exciting sonic intellect of Melih Fereli. The show has the potential to prompt a surge in the appreciation of the art world's overlap where Turkish and German backgrounds have merged while seated at the table of what Cage famously referred to as chance occurrence, sometimes more fancily termed, aleatory.

In contrast to the fixed modes of composition, the life of environmental sound, even if artificial, holds the essence of probability. It is its condition of opposition, from stillness to motion, predetermination to performance, that produces the result of what's played. The prime variable could be said to be time. “Traces,” however, might argue for the importance of place as the ground from which new music arises.

Extreme site-specificity has been a hallmark of Fluxus-inspired works, epitomized, perhaps, by Cage's iconoclastic composition “4’33.” Aladağ, in turn, has configured various settings out of her childhood memories growing up in Stuttgart for “Traces,” transforming the nostalgic scenes of parks, rooftops and avenues into depersonalized musicians, the environment as a performer. She seems to wonder what kind of music the places she remembers would play.

Sounding on and off

There is an abrupt jump cut from the wheezing monotone of the accordion, punctuated by an ocean drum hovering over a road and followed by the shrill pierce of a balloon deflating into a flute. The transition is marked by the crashing ring of a gong before a frame drum steps down a flight of stairs, its percussive function revised by gravity's pull. The gong and drum roll across paved and grassy terrains. Their circular, wooden surfaces sustain a textural resonance.

Aladağ compressed a series of sharp sonic tastes that in succession serve a consistent, nourishing appetite for music that sounds like a fusion of the urbane and the natural. All things, whether in the upper atmosphere or a sewer, are motive. The spin of a stray drum softly rumbling down a street has a liquid aura, the throb of accordion and tambourine attached to mechanical, kinetic children’s rides are arboreal, earthy.

At a point, “Traces” merges its otherwise unique separation of videos, while the sounds flow in compositional unity, where a violin is strapped to the outer rung of a merry-go-round as its strings graze a bow affixed to the ground, culminating in a gradual screeching halt. The camera is held in different positions, to the instrument, the ride and bow, provoking a kind of musical anticipation, both tempered by its aural and physical circumstances.

The presence of silence is prescient throughout, animated by intervals of airy legato when the accordion is loosed, its top hanging from a metal unit, or as the flute-bound balloon hovers upward and the wind plays a moving panpipe. The silvery beads inside the ocean drum come into focus closeup, resonating like tires zooming over an empty street. Although these reverberations might be mere noise to some, Aladağ has edited them with meditative clarity.

There is minimalism at work behind what appears to be quite complex contrivances of music, video and installation. Somehow, together, there is ample space in which to breathe and take in the artist’s remembered spaces with delicately timed, playfully rich interventions. It does seem that Aladağ is versed in music theory, considering the harmonious sequence that ensues as, for example, when the low tone of the accordion mixes with the high-pitched balloon flute.

In musical terms, “Traces” has inflections that could be found in the spacious, instrumental vocabulary of Morton Feldman, or the layered, futuristic percussion assemblages of Steve Reich. The use of repetition is key, then, where Aladağ has mixed and matched the self-performing instrumentation that she concocted like a prepared piano, to rise, crescendoing from the recollections of her early life.

For Aladağ, Stuttgart is a blank canvas on which to drip, lather and spatter abstractions of music. Another reference could be that of Harry Partch, a radical theorist and inventor of instruments, which he applied to his otherworldly composition style, only Aladağ has refashioned Stuttgart itself into a musical apparatus. Like a collagist, the violin, triangle, drums, gong, tambourine and bells that she employed are intimately woven within the urban fabric.

While mostly unpeopled, the accordion is, at times, surrounded by out-of-focus pedestrians, which makes for a mood of youthful abandon. “Traces” evokes that secret life that children experience in direct communication with magic in all of its forms. Because the inside of an ocean drum sounds like falling rain, or a fast-moving river, it then becomes that, transformed into such natural phenomena instilled by the imagination.

“Traces” comes across as a sincere, modest gesture of interconnection between the artist and her hometown, projecting its every delight and curiosity with a musical relish. In Istanbul, the relative simplicity of its soundscape is cathartic, open with outstretched expanses that allow a runaway frame drum to spin headlong over an empty park, or across a sparsely walked street, before turning over and collapsing like a whirligig.

The elements of chance that shape “Traces” are mechanical and gravitational, the former providing rhythm, the latter a kind of music based on field recordings not unlike the production of photographs of artificial settings. Aladağ arranged the sound with a fresh sensibility for the beauty of randomness that cities offer to those who might listen to them like a hiker would a forest or lake. Within every movement, the environment sings to its own beat.