The grand mystery of Salvator Mundi detailed in 'Lost Leonardo' 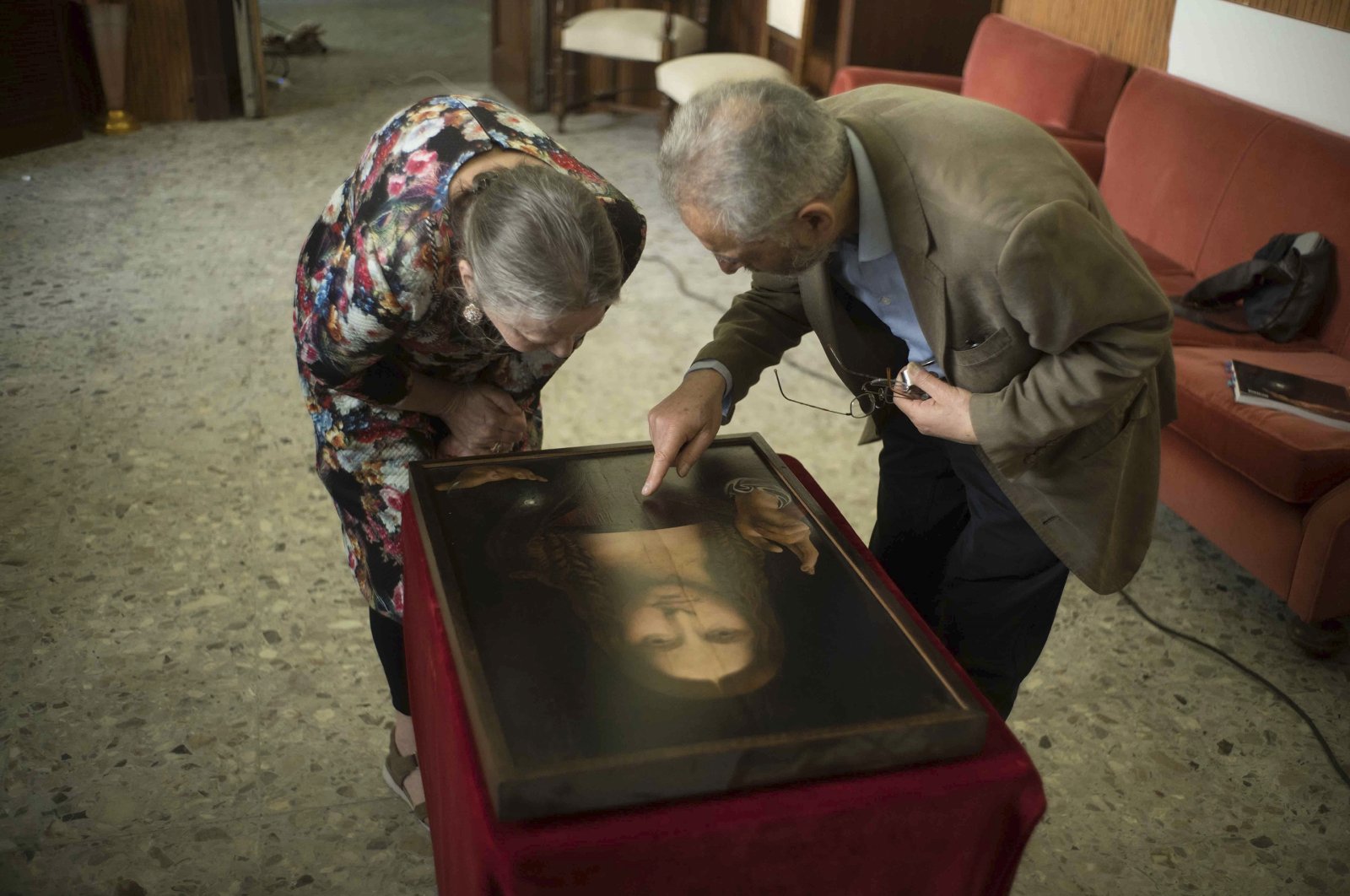 Dianne Modestini (L), and Ashok Roy inspect the Naples copy of the Salvator Mundi in a scene from the documentary "The Lost Leonardo." (Sony Pictures Classics via AP)
by Associated Press Aug 12, 2021 11:44 am
RECOMMENDED

Imagine the globe-trotting journey of a single painting: In 2005, it was sold for $1,175 in New Orleans, in 2013 for $83 million in London, then for $127 million in Geneva and finally for $450 million in Saudi Arabia, which remains the record sale for a work of art. Those are the baffling leaps and international stops and sales of a rediscovered Leonardo da Vinci painting as chronicled in the opening of the documentary "The Lost Leonardo."

Such is the winding journey of the Salvator Mundi, a painting of Jesus Christ attributed to Leonardo da Vinci that has been enveloped in mystery and intrigue ever since it was first acquired, restored and celebrated as a lost original of the Renaissance master.

"The Lost Leonardo," which Sony Pictures Classics releases in theaters Friday, engrossingly frames the unlikely saga like an international thriller as opaque as any John Le Carré novel.

To its director, the Danish filmmaker Andreas Koefoed, it's also a kind of dark fairy tale, complete with a prince and a lost treasure. Above all, perhaps, it's a portrait of an art world where masterworks can serve as global capital.

"You have this romantic idea of art as something pure and a beautiful expression of human beings through history, and then it meets this very cynical, capitalistic world," says Koefoed, speaking by Zoom from Copenhagen. "It's an explosive cocktail together."

The painting in 2017 obliterated art-sale records. But it was first acquired, like a far-fetched episode of "Antiques Roadshow," at a Louisiana estate sale. While browsing, a pair of New York art dealers believed it worth buying to get a better look.

They brought it to one of the field's top conservators, Dianne Dwyer Modestini, who carefully removed the heavy overpainting that coated it and mended other mistreatments from the intervening centuries. Gradually she and others began to think the painting wasn't the work of a Leonardo pupil, as once suspected, but of the master, himself.

Modestini's bond with the painting was especially strong. She worked on it for three years following the death of her husband, Italian conservator and art buyer Mario Modestini.

"It's not just a painting. It's more than that," Modestini says, speaking by phone from her New York apartment. "It's an object infused with power. That sounds a little weird and corny but I believe that. When I was working on it, I had this experience of feeling my husband was right by my side the whole time. And I couldn't have done it without him."

Many art historians and institutions – like London's National Gallery, which exhibited the painting in 2011 – have arrived at the same attribution. (Modestini created a website with technical details on her findings.)

But not everyone agrees with her conclusions. In the film, art critic Kenny Schachter jokes that it's a "contemporary painting" for how heavily it was restored. The art critic Jerry Saltz calls it "no more real than any of the dreamed-up scams and schemes by people that may not mean to be flim-flamming, but in the end, they all went along for the ride."

In "Lost Leonardo," it's a ride through an art world peopled by colorful characters and eccentric billionaires. The painting was first sold to Swiss businessman Yves Bouvier, who expanded the use of freeports as tax-free stations for high-priced goods, like artwork.

He paid $83 million but he was really acting on behalf of Russian oligarch Dmitry Rybolovlev, to whom Bouvier immediately flipped it for $127.5 million. A high-profile lawsuit resulted when Rybolovlev learned of Bouvier's negotiating tactics.

In the art market as seen in "Lost Leonardo," it's seldom clear who's buying and who's selling. One person calls it the most unregulated market after drugs and prostitution. Even once the Salvator Mundi was auctioned by Christie's, the winning bidder of $450 million was unknown.

Only later did reports leak out that the ruler of Saudi Arabia, Crown Prince Mohammed bin Salman, was behind the purchase.

The Salvator Mundi was later expected to be shown at the Louvre, but was ultimately absent from a major exhibition reportedly due to the museum's refusal to exhibit it, as Mohammed requested, alongside the Mona Lisa. Since 2017, the painting hasn't been seen publicly.

"It proves a point of the story that the truth is somehow lost in all this," says Koefoed. "There's so much at stake, so many power interests, so many money interests that the truth disappears. Not only do we have a lost painting, we also have lost the truth somehow."

Koefoed, a veteran documentary filmmaker, has no fine arts background and was only drawn into the story of the Salvator Mundi after its headline-making auction. He and cinematographer Adam Jandrup shot many of the subjects head-on, as if they're sitting for a portrait, and lit them a little like a Renaissance painting.

The movie refuses to take sides in the still-simmering disputes over the Salvator Mundi.

"I decided to remain open to both possibilities," says Koefoed. "I think it's more interesting to let the viewer become their own detective in the story."

The National Gallery, the Louvre and Christie's declined to participate. But of the many players that did none has a role like Modestini. Her experience with the painting and its contested reputation is rendered intimately. She has only praise for Koefoed and his film, but no longer has energy for debates over the Salvator Mundi.

"I don't really care. I know what I know about the painting and it seems to me a no-brainer to me, the attribution. If people have other ideas, that's fine. But I really would like to get on with my life. It's been so consumed by this. I will never make another film," Modestini says. "This is it for me."

The painting, though, still looms large in her mind. Its power, she says, is only really conveyed in person. The effect can't be photographed. It can't be reproduced.

"It just emanates this extraordinary sense of something totally beyond human understanding," Modestini says.

"It's a tragedy that it was so abused," she adds, before reflecting on it being out of sight. "It's a continuing tragedy."