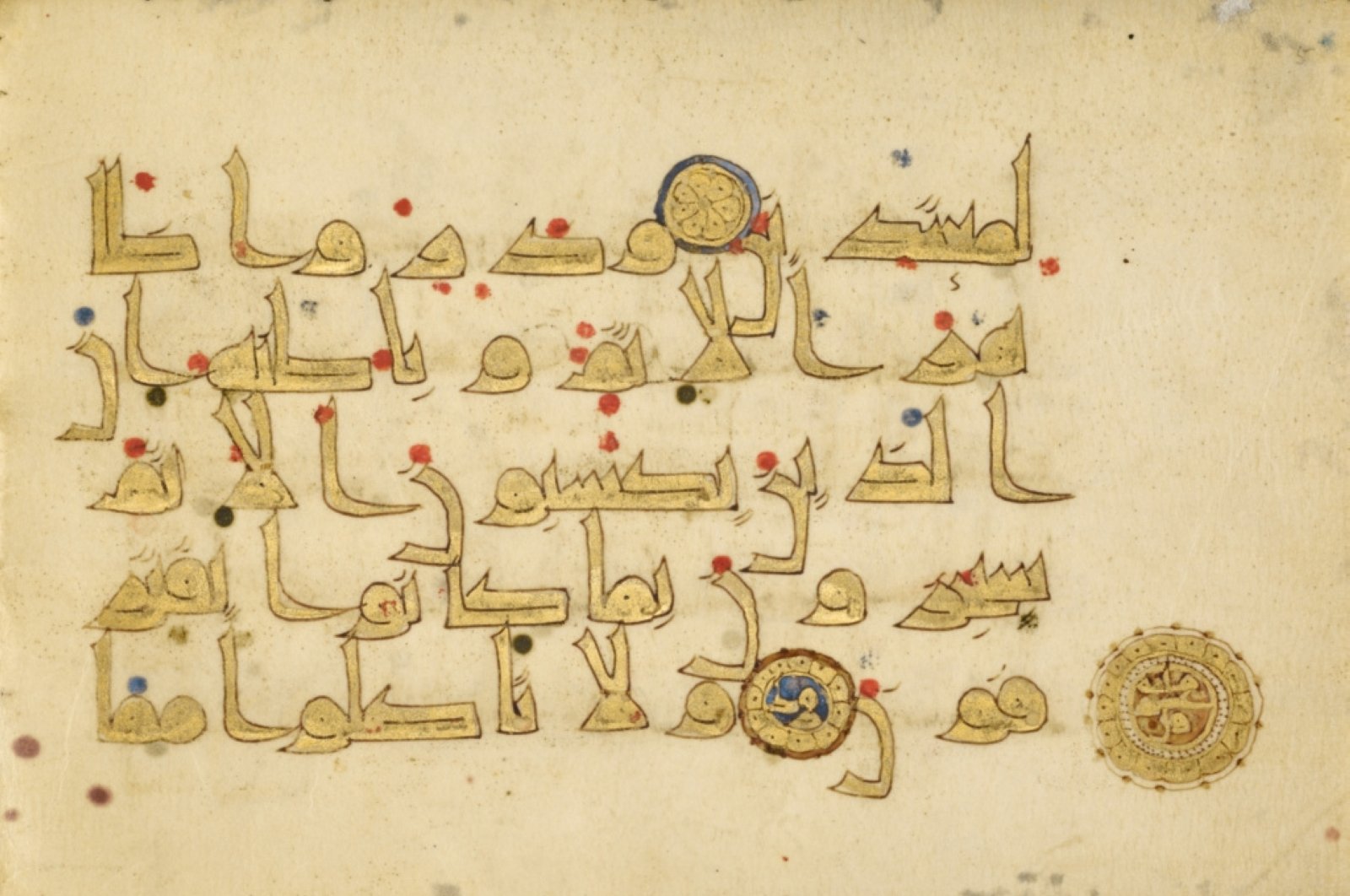 Among the thousands of museum exhibitions remotely viewable via Google Arts and Culture, the J. Paul Getty Museum is hosting a digital show of exquisitely preserved manuscripts of the Torah, Bible and Quran

Through the looking glass, the wandering seer spies sacred texts from the three great monotheistic traditions, their illuminated calligraphy rendered to the finest wisp of an ink brush flicked centuries past.

A dazzlingly detailed piece, "Decorated Text Page, Book of Exodus, from Rothschild Pentateuch" appears first, as is chronological to the historical precedence of the kindred, Abrahamic faiths. Made in 1296 by an unknown hand, it is a supreme example of premodern artistry toward the end of the infamous Dark Ages, out of which the West emerged.

Without supreme knowledge of the folk embellishments and institutional umbrella under which the anonymous painter-scribes worked, it is impossible to assess the visual and textual references of this overwhelmingly baroque, gold leaf manuscript. However, a naive eye has a fantasy land of explorative potential across its opaque, magisterial beauty. Following in line within a context in which bestiaries were popularly conceived, the Torah flies with imagination.

Integrated within the living architecture of what is likely a creative portrayal of Solomon’s Temple in Jerusalem, or an incarnation thereof, the columned and buttressed holy structure of religious magnificence stands square atop the main bodies of text – held up, as it were, by streaming vegetal spires, tail-like and ethereal. The color scheme, a rustic invention of vibrant oranges, cerulean and plush purples, evokes the velvet airs of the era, in which clothing fashions were dominated by the fusty pomp of its softness.

Lion-headed dragons grow like flowers atop the corners of the temple, its sharp corners are winged with fire, bejeweled and encrusted with precious stone, yet also retaining an organic naturalism, however otherworldly. Within its three chambers, a white stork lunges upward into a coruscant haze of stars. Enwrapped in vines, their necks entwined, a pair of mammalian birds face-off, embedded in the multilayered architectural dream. The Hebrew for "David" is set within the maelstrom of swirling abstractions and geometric complexities.

The Rothschild Pentateuch is in codex form, not the typical scroll of most Torahs as they are used ritually in synagogues today. Pentateuch is a Greek word meaning "five books" – referring to the books of Moses, including Genesis, Exodus, Leviticus, Numbers, and Deuteronomy. This is the core of the Hebrew bible. In the 13th century, when calligraphers created the masterpiece at the Getty, they were serving Jews in northern Europe, particularly those who settled in the Rhineland – later referred to as the Ashkenazi.

The Ashkenazim form the largest component of the world’s Jewish population, accounting for about 80% of communities around the world. The etymology of Ashkenaz refers to the name of the great-grandson of the Biblical Noah, from whom the Jews of northern Europe claim direct descent. Coincidentally, it was during the time of the forging of the Rothschild Pentateuch when European Jews assumed their title as Ashkenazis. Likely, an itinerant Jewish scribe declared it.

Transgressing restrictions that kept Jews out of painting guilds, the scribe would work with local artists, often Christians. This being the case, invaluable works of this kind can be seen as the result of interfaith collaboration. As the first Hebrew manuscript in the Getty collection, illuminated across a thousand magic-inspiring pages, it is one of the first five books of the Hebrew Bible produced during the Middle Ages. With two main varieties of Hebrew script, it is a powerful demonstration of the literary and artistic treasury of its contemporary aesthetics.

The art of illuminating the Bible risked being lost in time by the 15th century when Johannes Gutenberg invented the printing press. Its exacting elegance is as humbling as the message of Jesus himself. Inscribed in Greek, Latin, Syriac, Ge’ez, Armenian and other languages, the New Testament leaped from its Hebraic ancestor with epistles of the prophet’s disciples, accounts of his life, and a tale of the apocalypse. One copy of a particularly sumptuous production from 1450 at Getty was made for the cathedral of Cologne in Germany.

The manuscript detail, known as “Initial P: Saint Paul” is attributed to the Circle of Stefan Lochner. As movable type was just beginning to revolutionize the political dimensions of social life, overthrowing the foundations of historical religion and public education, illuminated Bibles gained a rarified appreciation. By 1450, the Circle of Stephen Lochner finished the Bible toward the end of Gutenberg’s relatively long life (passing away at 78, he lived twice as long as most people of his day).

The decorated letters are practically sculptural, as they leap out of the parchment with a spherical visual pull. Medieval artists who worked on illuminated manuscripts essentially practiced a premodern version of op art, contrasting precise geometrical abstraction against figurative realism, mostly of saints and prophets, and gilded calligraphy. A fascinating, almost multimedia dimensionality comes into focus where the illuminator painted Apostle Paul inside the loop of the letter "P" – pointing and eyeing his words, as revealed. It is a theatrical holy text.

And finally, a Quran from the ninth century (second century AH), known as "Bifolium from a Fragmentary Qur’an," presents, among its many internal treasures, decorated pages from Surat al-An’am – specifically lines 121-122 of the sixth chapter. Their content refers to the ethics of diet and the miracle of resurrection. But the innovative visual wonders of its display on the sepia-toned paper, handed down for over a millennium, speak of self-mastery and the strength of the human will to outperform itself, to inspire moral thought with sublime joy and solemn respect for the fickle nature of consciousness and the whims of creation.

The remote curation from the Getty describes how early Muslim scribes and artists performed their unique adaptations of the manuscript traditions that they have ultimately shared with their coreligionists of the three Abrahamic traditions. Quranic calligraphers would trace Arabic layers first before placing gold leaves with special care onto the word "Allah." There were certain effects to indicate logistical aspects of ritual readings, as concerns the ceremonial usage of such manuscripts. Each chapter ends with ornamental rosettes.

With its hue of indigo blue against alternating shades of sandy beige, the ambiance is that of North Africa or the deserts that span much of the geography for countries in which Islam is the majority faith. "Bifolium from a Fragmentary Qur’an" at the Getty is likely from Tunisia, as the L.A. museum’s curators speculate that its texts were recited aloud at the Great Mosque in Kairouan, a small landlocked city surrounded by the Sahara Desert. The layered surface weaves across calligraphic semi-abstraction almost like a carpet. It has a grooved, metallic aesthetic born of its greater cultural spirituality, defined by simplicity and directness.