The network of Venetian origin that connects, deludes world 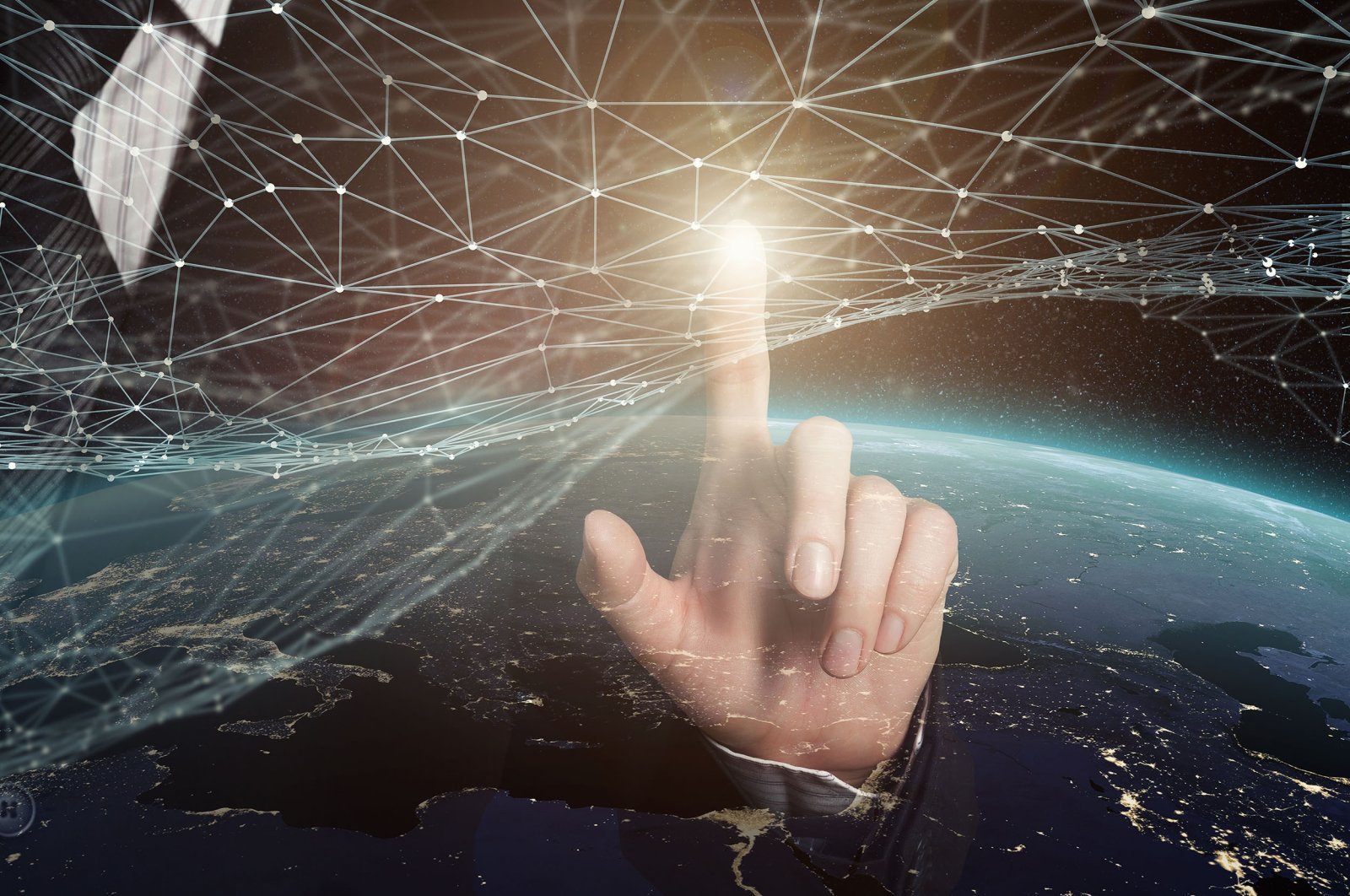 Computers, the internet, mobile phones, fiber cables and satellites weave together an ever-growing electronic, digital network where everything and everyone is interconnected today. (Shutterstock Photo)
by Mehmet Hasan Bulut
Oct 14, 2021 2:16 pm

Although we think of the internet and the World Wide Web as reliable information systems in the modern world, history reveals the reality of these networks

In Norse Mythology, Loki, the deceiver of the gods, invented the fishing net. According to the legend, Loki angered the gods one day and fled, hiding in the mountains to evade his pursuers. As he sat in his hut and thought about how the gods would catch him, he wove the first fishing net.

When the gods finally found his hut, Loki threw his net into the fire to destroy it. He immediately transformed himself into a salmon and leapt into the nearest river. However, the gods saw the net among the ashes and understood its use. As Loki the salmon swam down the river, he was caught by his own fishing net, hoisted to shore and punished by the gods. Loki was captured by own ingenuity.

When the word “net” is combined with “works” in English, it means a fabric or structure of fibrous elements connected at regular intervals. But it has also been used to mean any interconnected group or system, which can be translated as “şebeke” in Turkish. Şebeke is actually a word of Arabic origin and was initially used to define a fishing net or woven fabric, like network in English.

The English word "web" also means a network of fine threads constructed by a spider, that is, a spider web. This article is a short story of the world wide web, the real spider web that connects us all, just as the word “connect” implies: It is derived from “con,” meaning together, and “nectere,” meaning bind.

The Venetian state was historically a bridge between the Orient and the West. Although it was known as a republic, power was concentrated in the hands of related aristocratic families. It was a small maritime state stuck in the north of Italy after it lost its lands to the Ottomans, but all correspondence, intelligence, and money between Europe and the East passed through this city.

Venice was the richest country in Europe, as aristocratic families in this republic were also merchants. They had established an economic network extending all over the world. Maybe that is why they didn't have much to do with religion even though they called themselves Catholics. Despite the Pope's objections, they invaded and plundered Constantinople. They welcomed all those fleeing the Inquisition, especially those in Italy. They also laid the foundations of sectarian wars by severing the British court, where they had a very strong influence, from the Catholic Church.

Thanks to these characteristics, the contributions of the Jews expelled from Spain and those fleeing Ottoman Istanbul, a Hermetic and Humanist network emerged in Venice from the beginning of the 16th century. In the 17th century, atheist priest Paolo Sarpi, Dominican friar Giordano Bruno, Galileo Galilei – who taught at the University of Padua affiliated to Venice – Sephardic Rabbi Leon Modena, British ambassador Henry Wotton, French Duke Henri de Rohan and many more could find a place in this network.

This network, which gathered in the houses of Venetian aristocratic families such as the nobles of Morosini, grew over time. And like Arachne in Roman mythology, who turned into a spider when she challenged Minerva – the Roman goddess of wisdom – it began to weave its webs to hunt down the unwary.

To cast a spell and bind is the same word in many languages. Magic, on the other hand, was divided by Renaissance scholars into black magic and white magic. The modern "science" we are taught today is white magic clipped by Venice. The Venetian network offered the public a positivist science based on feelings, because in order to weave a web of magic and illusion around the world, they needed to make people accept that the truth can only be understood with the sense organs, which could then deceive people's feelings.

Bruno, in his work “De Vinculis in Genere” (“Bonding in General”), tells how to deceive people psychologically. He says that the magician chains and binds his victim through three gates found in man: seeing, hearing, and imagining.

Speech has a magical effect. Words are like a knot on a string. The speaker weaves a web with the words he uses. Consequently, this is also valid for ideas and books. For example, in English, "text" comes from "texo," that is, weaving. In other words, every book is a weaving, a fabric, a web that surrounds the reader. Printing technology, on the other hand, copies this network model thousands of times in a short time and makes it possible to weave a large web quickly.

The Venetian network, which devoured works by Niccolo Machiavelli, was well aware of this situation. “All of our work and philosophies were about exposing the deception of words and ideas,” Priest Sarpi, who studied at the University of Padua, once wrote. A quarter of the books in Europe were printed in Venice. As early as the end of the 15th century, about 200 printing presses were operating in the city.

In English, the word religion comes from the Latin “religare,” meaning to bind. For example, the religion of Islam, as mentioned in the Quran, is a rope of Allah for the salvation of people. Therefore, people must first be cut off from existing ties such as religion, family and community in order to be caught in the web of illusion and then dragged into nothingness, into emptiness, into the void.

For this purpose, Venice removed man and the earth upon which he lives from being the center of the universe. According to hermetic belief, the sun was in the center. Believing in the heliocentric system as an absolute created a great spiritual hollowing of Christian Europe. Nicolaus Copernicus, who played a leading role in this work, was a student of the Venetian nobleman and scholar Gasparo Contarini at the University of Padua.

In his work “The First Anniversary,” the English poet John Donne, who was a part of the Venetian network, shows Copernicus's latitude and longitude as a web that mankind has woven on Earth.

Venice succeeded in establishing a modern science network with scientists such as Galileo, Francis Bacon and Isaac Newton, the alchemist friend of the nobleman Antonio Conti, and the freemasonry sect on the one hand, and with Jesuit colleges that placed great emphasis on astronomy on the other.

Spider Venice continued to weave its technological trap by rail, telegraph and telephone after books. Today, computers, the internet (inter-network), mobile phones, fiber cables, base stations, satellites, drones and subcutaneous chips weave together an ever-growing electronic, digital network where everything and everyone is interconnected. Thanks to its hermetic, economic and technical network, it is now possible for this spider to create all kinds of illusions and holograms.

In many beliefs, the universe, namely the macrocosm, is compared to a giant web created by God and destiny is compared to a woven fabric. Man, known as the microcosm (small universe), is also surrounded by veins and nerves called the wonderful net (rete mirabile) and by this invisible fabric of destiny. Throughout history, some deceivers have wanted to weave their own webs in these realms by means of deception, magic and science. But these webs, which they had churlishly woven, were dispersed like the spider's by a morning wind. Fate has woven its own nets over them. And Allah is the best of plotters. As it is commanded in the Quran in Surah Al-Ankabut (The Spider) – the 29th chapter of the Quran; “The frailest of all houses is the spider's house; if they only knew.”