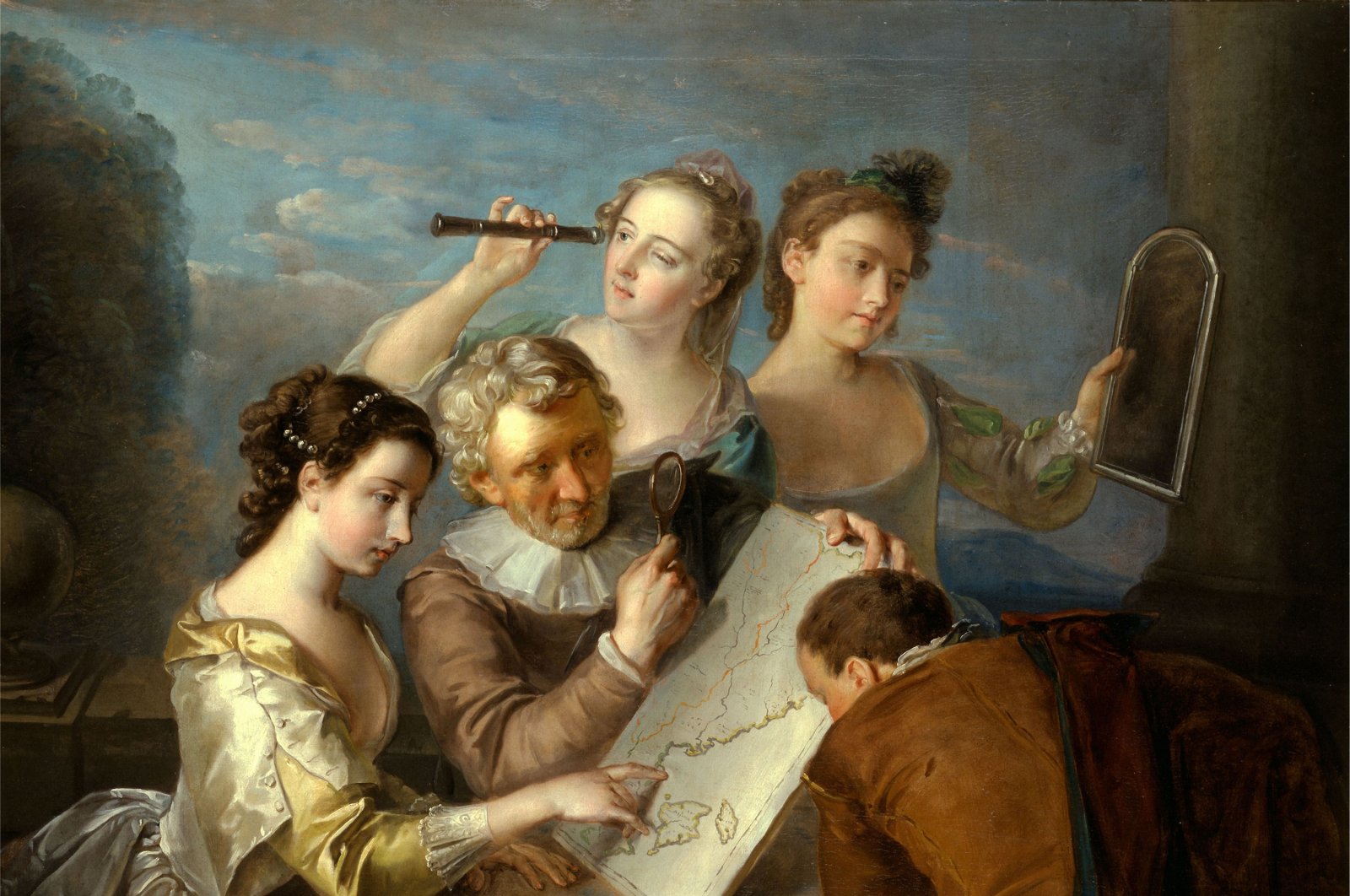 The whole world has been believing that positivist-empirical traditions are the way to understand reality for a long time. Are they really so?

Humans have three cognitive powers: sensory organs, the mind and the heart. Like electricity in a light bulb, the heart in the breast is the supreme power. The duty of feeling is to reach the mind while the duty of the mind is to reach the heart. The mind understands what the sense organs cannot, and the heart understands what the mind cannot. The divine religions are based on the narration from the messengers of Allah (God) and they are suprarational. It suits the heart that is not sick and the mind that is benign, but ordinary minds and the hearts of wrong-doers believe that what they cannot understand is irrational.

There is another understanding that was born in Venice with the atheist priest, Paolo Sarpi, who passed away in 1623, and his team, which spread to Europe and then to the rest of the world. According to this school, the way to the truth is not from the heart; it passes through feelings in a positivist-empirical way. This understanding, which accepts that the truth can only be understood by experiencing it through the doors of perception such as eyes and ears, dominates almost every field today. But it contains a great danger: Since feelings based on images and sounds can be deceptive, the truth presented to you may be an illusion.

Illusionist David Kwong, who works in Hollywood, says that the illusion actually occurs in the mind of the audience. Magic is realized between what is believed and what is known. We believe what we are told and see things that confirm what we believe. This is the basic principle of magic.

We are lazy beings and our habits strong. Our brain uses certain patterns when comprehending something because it prefers shortcuts and does not like chaos. It fills in the blanks by comparing what it does not know with what it knows. When it sees or hears something new, it tries to put it into certain patterns or cause-effect relationships in its memory or routine. Magicians make use of these patterns and cause-effect relationships. For example; the coins make a metallic sound when they strike each other, and we all know this simple cause and effect. Thus, if an illusionist holding a coin in his hand makes this metallic coin sound while waving their hand, we think he is holding more than one coin. And when he opens his hand and shows that one coin in his hand, we are amazed at how he managed to make the other coin disappear.

While our brain tries to make sense of the signals coming from the doors of cognition and sense, such as eyes and ears, it fills in the gaps according to the beliefs and patterns we have. For example, think of the stickman we draw in the margins of a book. When we turn the pages quickly, we see that it moves like an animation or a movie as our brain closes the gaps between the pages. Likewise, when we listen to an orchestra, we hear only one piece of music instead of separate instruments. When we eat cake, we get only one flavor and not that of all of its components, like milk and sugar, separately. There lies our weakness.

Because of this weakness, we see more than our eyes can see. We can read words even without vowels. In the Kanizsa Triangle, we see a nonexistent triangle as if it exists. When the magician holds a string or a spoon between his fingers with his palm closed, our brain perceives it as a single piece of string or spoon. In this way, we are surprised when the magician snaps his other hand and reveals the two ends hidden in his palm as two ropes or when he bends what our eyes see as one spoon, when in fact he is hiding a two-piece spoon. Likewise, we get excited when he cuts the woman in a box in half and then puts her back together. Even though the inside of the box is not visible, the brain connects the feet and the body and fills the gaps.

Magician and historian of magic Peter Lamont says, "We have to learn the rules of what is possible before we can understand what is impossible. We need to form a worldview that rules out certain events before we can marvel at what should not happen. Until then, we live in a world in which anything is possible, but nothing is extraordinary." As a matter of fact, babies are not surprised and do not react to magic shows, since cause-effect relationships and patterns and beliefs have not occurred yet.

But children are able to fill in these gaps once they start going to schools and are taught to believe in certain things by society and family. If they are presented with certain images on social media, their minds will be able to close the gaps according to what has been taught. This is because the experience of magic depends on beliefs about what is possible and what is not.

For example, if Hollywood first made space movies on a Mars set, and then NASA, in collaboration with Hollywood, presented images similar to the ones in the movie after announcing their arrival to Mars, everyone would believe it. This means if you create the patterns first, the brain will do the rest. So much so that people will believe even if you claim that you are driving in space and even that Martians have invaded the Earth. As British science fiction writer Arthur C. Clarke, one of the screenwriters of the movie “2001: A Space Odyssey,” which was released a year before the Apollo 11 moon journey in 1969, said, “Any sufficiently advanced technology is indistinguishable from magic.”

“Magic without a strong story is like sugarless cake,” Kwong says. People like black-cloaked heroes with superpowers, the stories of companies that operated from a garage, states with the power to go to the moon and magicians who do the impossible. Most influential stories in illusion, create a problem first and escalate it as the hero tries to solve it, like in action movies or our recent history. At the last moment when all hopes are about to be dashed, our hero solves the problem. However, there is an important point to be considered while writing the script. As Kwong explained: “Illusion generally bends reality, but the story it tells should never be based on an outright lie."

We feel more ownership and excitement in our own decisions or when we discover something by ourselves. That's why magicians like to involve the audience in the story and scenario, just like in democracies and wars of independence. The magician, who tells a spectator to choose a card from a deck, directs the spectator's thoughts to the card he has chosen before or makes him choose the card he has set before using various tactics. He is like the “choice architect” of Psychologists Richard Thaler and Cass Sunstein, who urged people to a decision that had already been made through methods such as group psychology. But for this illusion, the audience must believe that it is their decision and they have the right to choose freely.

We are surrounded by so many stimuli trying to get our attention that our brains can't process them all. Our attention is like the spotlights on the stage. Therefore, we become blind and deaf to the places other than where we turn our attention, that is, where the illusionist makes his secret moves. As in Rubin's Vase, we cannot see the vase if we see the faces or if we see the vase, we cannot see the faces. Moreover, the closer you look, the less you see.

Consequently, the manipulation and management of the audience's attention and the frame they see are very important in illusions. The attention of the spectator should be drawn away from the mechanisms used by the illusionist or the method of deception, toward the result that the illusion wants and that will activate the senses. Materials such as smoke and mirrors, the jokes made by the illusionist, and the beautiful assistant in a low-cut dress, are always used to focus the audience's attention. Politicians who want to hide a scandal also use these tactics when changing the agenda. Official historians also adjust the frame so that other undesirable but essential parts are hidden from view. Since the frame of the television, that is, the viewing angle of the cameras is clear, these things are much easier in front of the TV.

When something goes wrong with the show, the magicians have exit doors to protect themselves. The main task of these exits is to preserve the success of the illusion. In such cases, it is very important that the illusionist should be confident and should not panic if something goes wrong. That's why magicians occasionally make deliberate mistakes and fix them. So the magician grows in the eyes of the audience, and when the magician really makes a mistake, they think it's part of the show.

Thanks to these principles, illusionists deceive people by making something possible seem impossible. The people watching them also know they are being cheated on but enjoy it anyway. But when the impossible is made possible, people are deceived but do not realize that they have been deceived. In this method, only the magician who does the trick has fun.

There may be an illusionist sect that dominates the world today and follows in the footsteps of Sarpi. Although they are Platonists, they are deceiving people with a worldwide illusion thanks to the Aristotelian positivist-empirical understanding they teach people.

So, as said in “The Dark Knight Rises,” the final installment of Christopher Nolan’s Batman trilogy; “Theatricality and deception are powerful agents to the uninitiated.” And again, as described in the second installment of “The Dark Knight”: “Sometimes the truth isn't good enough. Sometimes, people deserve more. Sometimes, people deserve to have their faith rewarded.”