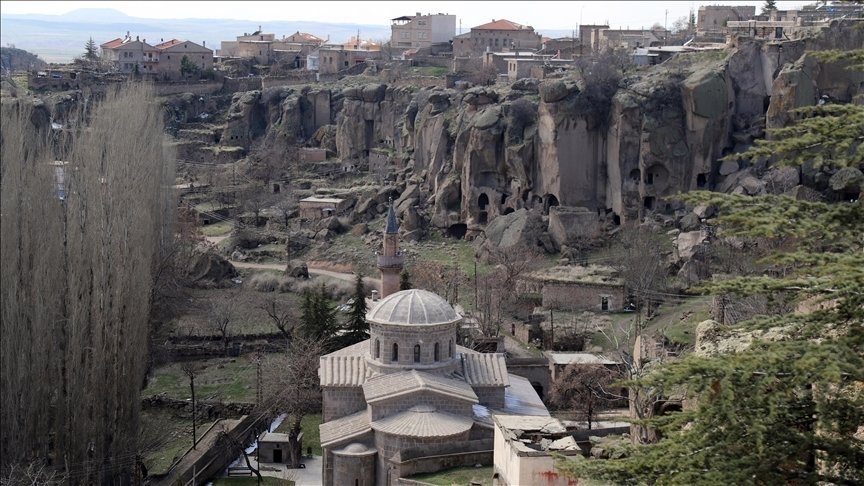 A mosque converted from a church known as Little Hagia Sophia was drawing thousands of tourists every year to the Güzelyurt district of central Aksaray province during the pre-pandemic period. The structure, aiming to host more tourists in the virus-free days of the future, is a historical marvel enchanting visitors with its architectural features.

The church was built by Roman Emperor Theodosius I for Saint Gregory of Nazianzen in A.D. 385. Following a population exchange agreement, Roman Greeks living in the district migrated to Greece in 1924. The Muslim population of Greece migrated to this region paving the way for the church to be converted into a mosque.

The garden of the mosque has an underground spring which can be reached by a flight of stairs.

"It was actively used as a place of worship during Saint Gregory’s era. The guesthouse next to the building was used as a consultation council where important state affairs were discussed and weddings were held," Erciyas said.

Noting that the spring water at the site is considered holy by Greeks, he said many local and foreign tourists use this water to treat skin conditions.

"One of the most important features of this place is that it is where the first church choir was established and the first audible ritual was held," he added.

Stating that the mosque received 150,000 tourists every year before the pandemic, he said: "The place is currently open to visitors. We think more tourists will arrive once COVID-19 measures end."

A Polish tourist, Thomas Tulak, said it is his first time visiting the region with his family.

"I was very impressed when I entered, it is a very ancient and historical building. I was very surprised to learn that it is older than Hagia Sophia," he told AA.