Hagia Sophia reopens as mosque with 1st prayers in 86 years 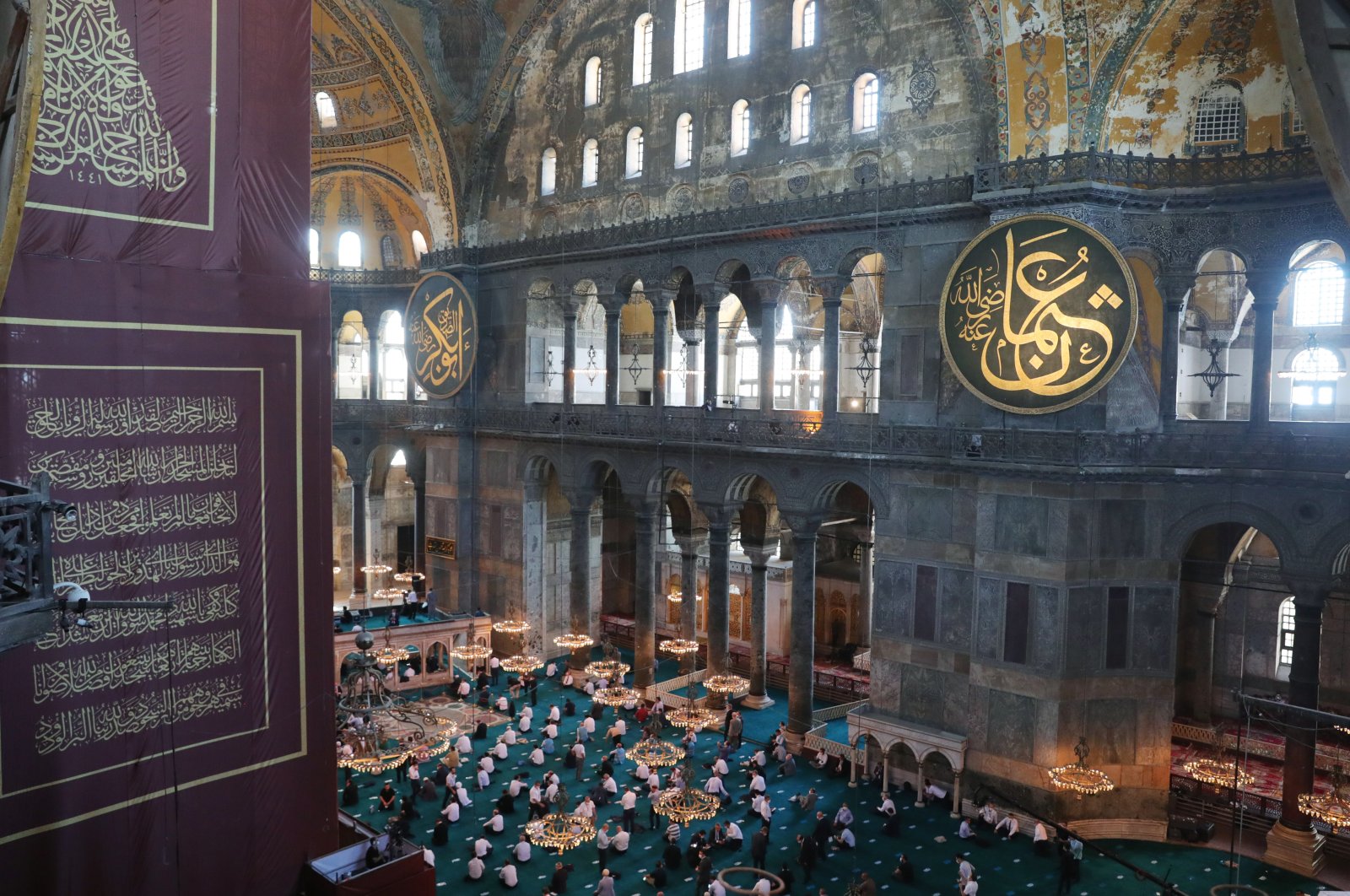 Istanbul's Hagia Sophia Mosque opened to the first prayers in 86 years on Friday with the participation of President Recep Tayyip Erdoğan, July 24, 2020. (AA Photo)
by DAILY SABAH WITH AGENCIES Jul 24, 2020 10:53 am
RECOMMENDED

Turkey’s iconic Hagia Sophia Grand Mosque reopened for worship on Friday for the first time in 86 years with four muezzins from the mosque's four minarets reciting the adhan, or call to prayer, and people performing their Friday prayers.

Thousands, including many who traveled from across Turkey, gathered near the mosque early Friday for the first prayers in decades while President Recep Tayyip Erdoğan also arrived at the Hagia Sophia wearing a mask, accompanied by Communications Director Fahrettin Altun as well as the head of the Presidency of Religious Affairs (Diyanet) Ali Erbaş.

“Hagia Sophia Grand Mosque is a cultural heritage of humanity as a whole. It was a mosque and was reverted back into a mosque," the president said following the prayers. “Some 350,000 people attended the Friday prayer around Hagia Sophia.”

The president added that the Culture and Tourism Ministry will conduct restoration work inside and outside the mosque. “Together with these works, our Hagia Sophia will hopefully gain a different, more meaningful structure,” he said.

The reopening, which included guests from all segments of society, began with the prayer program prepared by Diyanet. Prior to the inaugural prayers, the president recited verses of the Quran inside the nearly 1,500-year-old monument.

Erbaş led the first Friday prayer with a sword in hand, reading a special khutbah, or sermon, titled "Hagia Sophia: Sign of conquest, our trust in Fati̇h (Sultan Mehmet)," before the collective prayer.

"The longing that caused deep pain in the hearts of our people has come to an end," Erbaş said, as he added that the monument will be open to people of all backgrounds just as other mosques are.

"Today is the day when takbirs (Allahu akbar), prayers, and salavats (salutation upon the prophet of Islam) resonate in the domes of Hagia Sophia, and the adhan (call for prayer) rises from its minarets,” Erbaş stated. "Today is the day when believers stand up in prayer with tears of joy, bow down in submission and prostrate thankfully. Today is the day of honor and humility.”

Crowds formed at checkpoints surrounding the historic heart of Istanbul, where thousands of police maintained security. On entering the secured area, the worshippers, wearing face masks, sat spaced out on prayer mats in the city's Sultanahmet Square.

Istanbul Governor Ali Yerlikaya announced close to noon that all the prayer areas around the mosque are occupied and due to the coronavirus epidemic, they will not be accepting new entries to the area.

"We are ending our 86 years of longing today," said one of the devout, Sait Çolak, referring to the nearly nine decades since Hagia Sophia was declared a museum and ceased to be a place of worship. "Thanks to our president and the court decision today we are going to have our Friday prayers in Hagia Sophia."

The iconic monument served as a church for 916 years until the conquest of Istanbul. It then served as a mosque from 1453 to 1934 – nearly 500 years – and most recently as a museum for 86 years.

One of the most visited historic buildings in Turkey by domestic and international tourists, in 1985, during its time as a museum, Hagia Sophia was added to the UNESCO World Heritage List.

On July 10, a Turkish court annulled a 1934 Cabinet decree that had turned Hagia Sophia into a museum, paving the way for its use again as a mosque after an 86-year hiatus.

In the new era for Hagia Sophia, Turkey’s Presidency of Religious Affairs (Diyanet) will oversee religious services at the mosque, while the Culture and Tourism Ministry will supervise restoration and conservation work.

The architectural treasure will also be open to both domestic and foreign tourists free of charge.

Filled with excitement over hosting the reversion of the ancient structure to a mosque, Istanbul has been getting ready for the grand reopening with strict measures in accordance with both social distancing and Islamic rules. As part of the preparations, 17 health-check points with 736 medical personnel actively worked alongside an ambulance unit consisting of 101 vehicles and a helicopter waiting nearby. Visitors' temperatures were also checked and face masks were mandatory. Some roads were also shut down.

Istanbul Metropolitan Municipality (IBB) also took precautions for the big day. Providing 25 shuttles for public transportation to the mosque for free, the municipality also made parking areas in the region free. The municipality also planned to hand out 25,000 bottles of water, masks, disinfectants and disposable prayer rugs.

Erdoğan on Thursday unveiled a green sign with gold lettering in Turkish, Arabic and English in front of the iconic site that states: The Hagia Sophia Grand Mosque.

Ali Erbaş, the head of Diyanet, said Mehmet Boynukalın, Ferruh Muştuer and Bünyamin Topçuoğlu were appointed as imams of the mosque.

Boynukalın is a professor at the Religious Sciences Department of Marmara University, Erbaş said, noting that they appointed renowned scholars as imams in line with the Ottoman tradition.

Inside the Hagia Sophia, the Christian frescoes and glittering mosaics adorning the cavernous dome and central hall were concealed by curtains during Muslim prayer times but will remain on display otherwise.

On Friday morning, the interior echoed with the sound of recitations of the Quran by white-robed clerics sitting on blue carpets freshly laid this week ahead of the prayers.