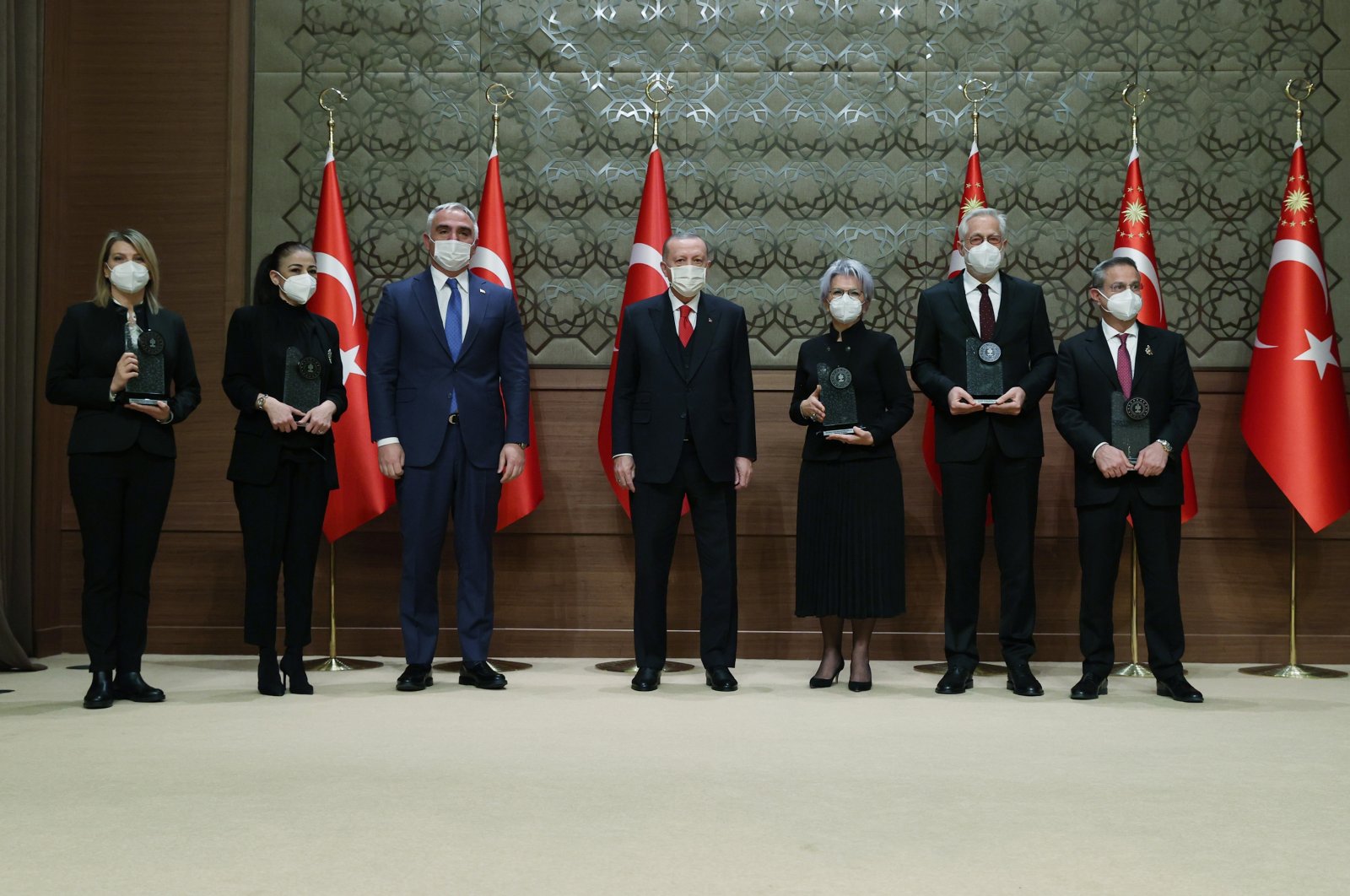 The Ministry of Culture and Tourism 2019-2020 Special Awards were presented to their owners at a ceremony held in the Presidential Conference Hall in the capital Ankara on Wednesday. President Recep Tayyip Erdoğan, Turkish Parliament Speaker Mustafa Şentop, Vice President Fuat Oktay, Culture and Tourism Minister Mehmet Nuri Ersoy and members of parliament attended the ceremony.

Speaking at the ceremony, Erdoğan said the Turkish language is not receiving the attention it deserves, calling for it to be protected. "We do not give the attention deserved to the Turkish language, which is the sign of our national identity and memory. Our Turkish has been subjected to the biggest word massacre in our history on the way to simplifying the language," the president said.

"The prohibitions imposed on words that we have been using for centuries have not been enough to free our language from the yoke of foreign languages, as claimed. On the contrary, our beautiful Turkish in the hands of language executioners got stuck in an impasse," he added. The president stressed that nations that do not protect their language and cannot enrich their language are doomed to topple, just like trees whose roots are drying up. "I believe that we can protect our culture, identity, history and art as long as we protect our language," he added.

Following his speech, Erdoğan gave awards to the representatives of the Civilizations Choir of Antakya Association, Odunpazarı Modern Museum (OMM), Hisart Museum, Istanbul Graphic Arts Museum (IMOGA) and Mimsanat Academy. The Civilizations Choir of Antakya Association and Odunpazarı Modern Museum were deemed worthy of the award last year, but the 2019 award ceremony was not held due to the pandemic conditions.

Speaking at the ceremony, Ersoy also said that the ministry has been presenting awards to those who contribute to Turkey’s cultural heritage and art with their work, interpretations and research since 1979. Noting that the selective board chose the winners after a meticulous evaluation period, the minister said: “The OMM is a gift from an art lover, Erol Tabanca, to all art lovers. His passion embodied in a private collection, compiled from the works of distinguished representatives from Turkey and the world, has become a unique center holding the pulse of contemporary art in Turkey. The Civilizations Choir of Antakya Association has opened a door to the accumulation of these lands, which is the cradle of human civilization, with art under the baton of maestro Berna Özfırat. They have become the voice of the very valuable union that invites everyone into this door with the tolerance, understanding and human love of the Anatolian wisdom that finds its essence in our civilization. The Mimsanat Academy, in the footsteps of late Turkish polymath Ahmet Süheyl Ünver, has been the representative of the enthusiasm and desire to enrich culture and art.”

The minister continued: “The Hisart Museum, on the other hand, came to life after a long and arduous journey of a child from passion to the determination of an entrepreneur. Halil Nejat Çuhadaroğlu’s passion has always overcome the challenge, as a result, history is revived in the aesthetics of art, and a unique collection has been brought to our country and nation. Also, IMOGA is the final stop on the journey of educator and artist Süleyman Saim Tekcan’s trust and dreams about her country's culture, art and youth.”