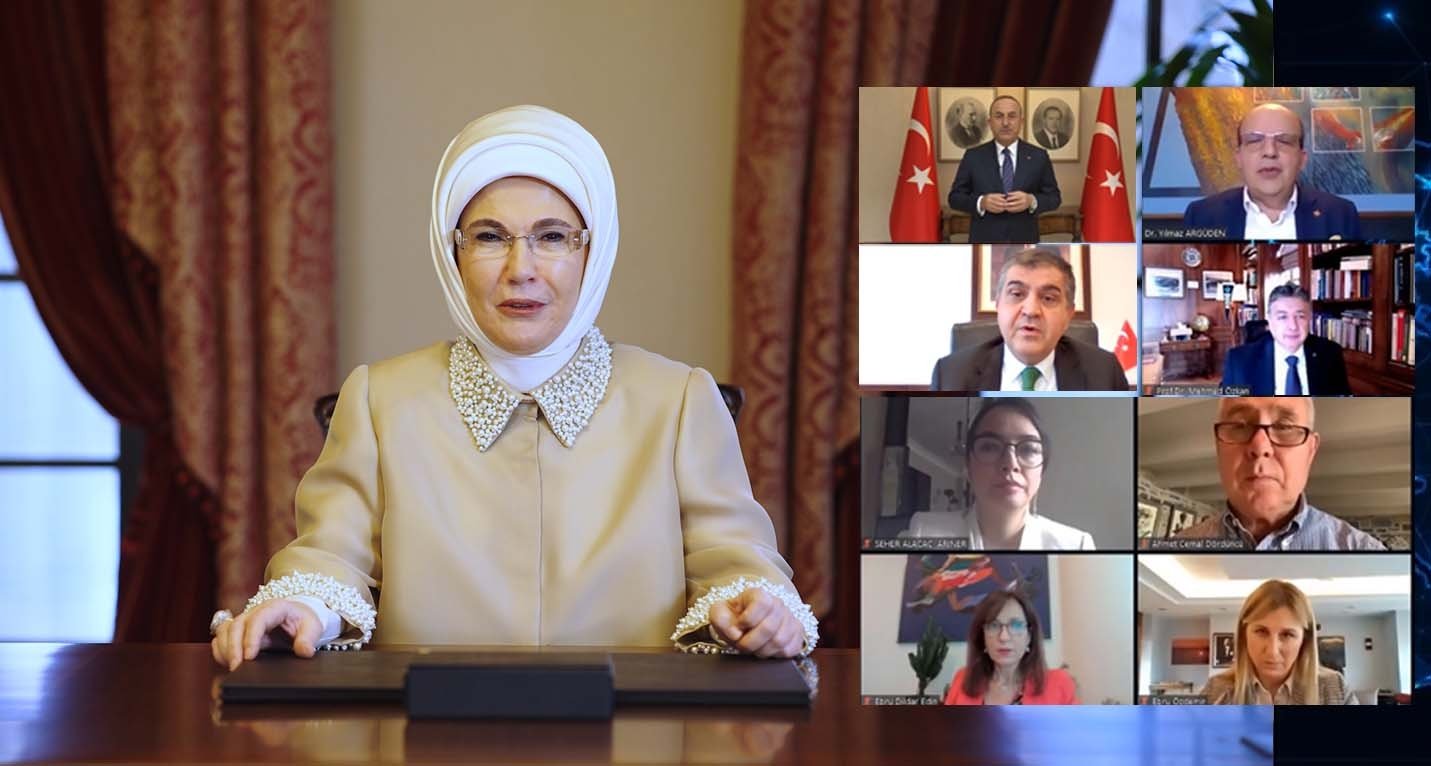 If we do not side with change, hunger, drought and migration will be the destiny of the future world, as the developments from the climate crisis continue to sound the alarm for all of us, Turkey’s first lady said Monday.

The world needs to act in a global mobilization in order to save future generations, Emine Erdoğan said.

Erdoğan sent a voice message to the Road to 2030 Sustainability Webinar which was organized by Turkuvaz Media Group and its new economic magazine, InBusiness, and held online due to the COVID-19 pandemic. The webinar was held as the first event of the Global Hope Fest series with a motto of "Take a step for a sustainable future."

Erdoğan emphasized that each passing day brings out new fields of struggle in the fight against the climate crisis.

“Yesterday, we were trying to prevent plastic pollution. Today, the pandemic that entered unexpectedly into our lives brought a new dimension to the pollution,” she said.

The first lady stressed that according to the United Nations Environment Programme, 75% of the masks we use today against the spread of the pandemic will go into landfills and surface waters.

“Thus, it is not alone enough to seek solutions for the existing problems; we need to be prepared for the possible crisis,” Erdoğan said.

Erdoğan urged that immediate steps be taken in order to be part of the change, rather than leaving “a dark future for our children,” as each wrong step we take today may be a disaster for future generations.

The usual way of consuming, through systems that are consuming while producing, is coming to an end, Erdoğan said, adding that it is the right time to shift to nature-friendly production systems.

“We see rising nature awareness in all parts of the world. Conscious consumers are rapidly abandoning the production that is being carried out by harming the environment," she said.

First lady Erdoğan noted that environmentally friendly products have gained popularity. For instance, she said, cosmetics brands that do not use animals for testing are preferred, and companies producing organic products such as food and textiles are becoming widespread.

She marked all these as hopeful developments, saying, “At this point, the promoting of the business of environment-friendly companies is very important, and we need to actively include young people and our children in this process."

Erdoğan urged businesspeople to explain and promote the green economy to young people during their internship periods in order to make them players in this mobilization.

“They need to recognize nature-friendly business ideas at a very young age. Young people’s environmental awareness shouldn’t be limited to the science projects they prepare as homework. They would see those projects are not just for school but have returns in business life.”

As well as the business world, media organizations need to take a significant role in raising awareness on environmental issues, Erdoğan said.

“Current problems like Zero Waste, sustainability and the circular economy can be turned into awareness thanks to you,” she said, addressing the media.

Other guests of the webinar included Foreign Minister Mevlüt Çavuşoğlu, Presidential Strategy and Budget Head Ibrahim Şenel and Deputy Foreign Minister Faruk Kaymakçı along with academicians and representatives from nongovernmental organizations (NGOs) and the business world.

Also speaking at the webinar, Çavuşoğlu said President Recep Tayyip Erdoğan has played a pivotal role in the acceptance of the 2030 Agenda for Sustainable Development.

He said that the targets of this agenda were included in Turkey’s development plans, which shows the importance that the president has attributed to the topic.

Çavuşoğlu said the Foreign Ministry has been actively contributing to the related agenda on global platforms to ensure a clean and livable environment for next generations and accessibility to education, health, employment and technology.

Noting that first lady Erdoğan hosted an event regarding Zero Waste last year at the U.N., Çavuşoğlu said this event was an exemplary one for the whole world.

Hundreds of new environmental projects have been initiated within the scope of the Zero Waste initiative, spearheaded by Erdoğan, to combat pollution.

The ambitious Zero Waste project was launched three years ago to introduce recycling to the masses and raise awareness about increasing pollution.

The country has saved tons of plastic and made its seas cleaner, with thousands of buildings, residences and companies having implemented recycling into their waste disposal policies.

The policy was first launched at the Beştepe Presidential Complex and went into effect in various government ministries in 2017, later spreading to the municipalities and some private companies and public institutions, including schools and hospitals.

The first lady contributed to the Zero Waste project by launching several campaigns, including Zero Waste Blue. Thanks to that campaign, 180,000 cubic meters (235,431 cubic yards) of garbage were collected from bodies of water and coasts between February 2019 and February 2020.

The programs of the Global Hope Fest are expected to continue throughout 2021 on a purpose-built video platform that could reach up to 1 million people. After the completion of the fest at the end of the year, a sapling will be planted for each participant. The programs are expected to take place every year and eventually become a tradition.