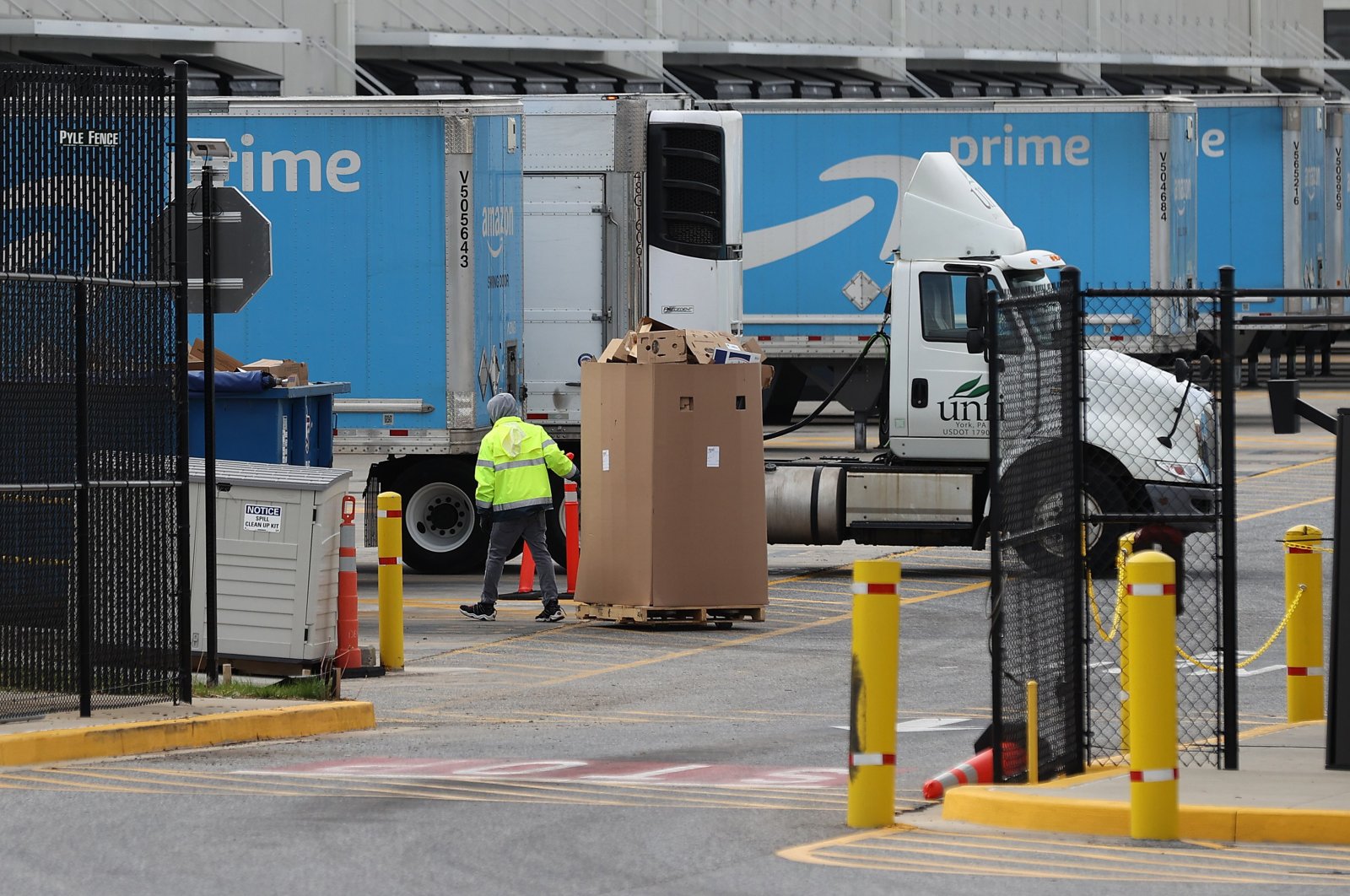 A worker moves boxes at the 1.2 million-square-foot BWI2 Amazon Fulfillment Center employing about 2500 workers in the Chesapeake Commerce Center April 14, 2020 in Baltimore, Maryland. (AFP Photo)
by Reuters
Apr 15, 2020 8:59 am

Amazon.com Inc said on Tuesday it had fired three critics of the company's pandemic response for workplace violations, dismissals that drew sharp words from U.S. Senator Bernie Sanders and a labor coalition.

The company on Friday fired two user experience designers, Maren Costa and Emily Cunningham, for what it called repeated violations of internal policies, without specifying which ones.

The two workers, who gained prominence for pushing the company to do more on climate change, had recently made public statements questioning Amazon's pandemic safety measures and pledging to match donations of up to $500 to support staff at risk of getting the virus.

The e-commerce giant also said it dismissed Bashir Mohamed, a warehouse worker in Minnesota, for inappropriate language and behavior. Mohamed told Reuters he had been warning colleagues about the virus and calling on management to increase cleaning; Amazon has been "tripling down on deep cleaning," it has said in recent statements.

Their dismissals follow Amazon's termination on March 30 of warehouse protest leader Christian Smalls on the grounds that he put others at risk by violating his paid quarantine when he joined a demonstration at Amazon's Staten Island, New York, fulfillment center.

In statements shared with Reuters, Cunningham said she believed Amazon could play a powerful role during the crisis, but to do so, "we have to really listen to the workers who are on the front line, who don't feel adequately protected."

Costa said in her statement, "No company should punish their employees for showing concern for one another, especially during a pandemic!"

The world's largest online retailer is facing intensifying scrutiny by lawmakers and unions over whether it is doing enough to protect staff from the novel coronavirus, which has infected more than 1.9 million people, including workers at more than 50 of Amazon's U.S. warehouses, according to the New York Times.

The company has been racing to update safety protocols, distribute protective gear and keep warehouses functional as it works to ship essentials to shoppers under widespread government stay-at-home orders. Small groups of employees have staged high-profile protests at several Amazon warehouses.

Mohamed, a 28-year-old Somali-American, said his boss told him not to organize other workers at the Minneapolis-area warehouse. Once he began informing colleagues of the risks they faced from the virus, he said, Amazon started targeting him.

"They didn't like the way I was talking," he said.

In a statement, Amazon said, "We respect the rights of employees to protest and recognize their legal right to do so; however, these rights do not provide blanket immunity against bad actions, particularly those that endanger the health, well-being or safety of their colleagues."

A dismissal letter Mohamed shared with Reuters did not specify social distancing but focused on his declining to talk to certain team leaders starting in early March; Mohamed alleged that before that period his manager had discriminated against him.

Public pressure on Amazon mounted on Tuesday, following five Democratic U.S. Senators who wrote to Amazon's Chief Executive Jeff Bezos last week to request an explanation about what happened with the other fired warehouse worker, Smalls.

Sanders tweeted: "Instead of firing employees who want justice, maybe Jeff Bezos – the richest man in the world – can focus on providing his workers with paid sick leave, a safe workplace, and a livable planet."