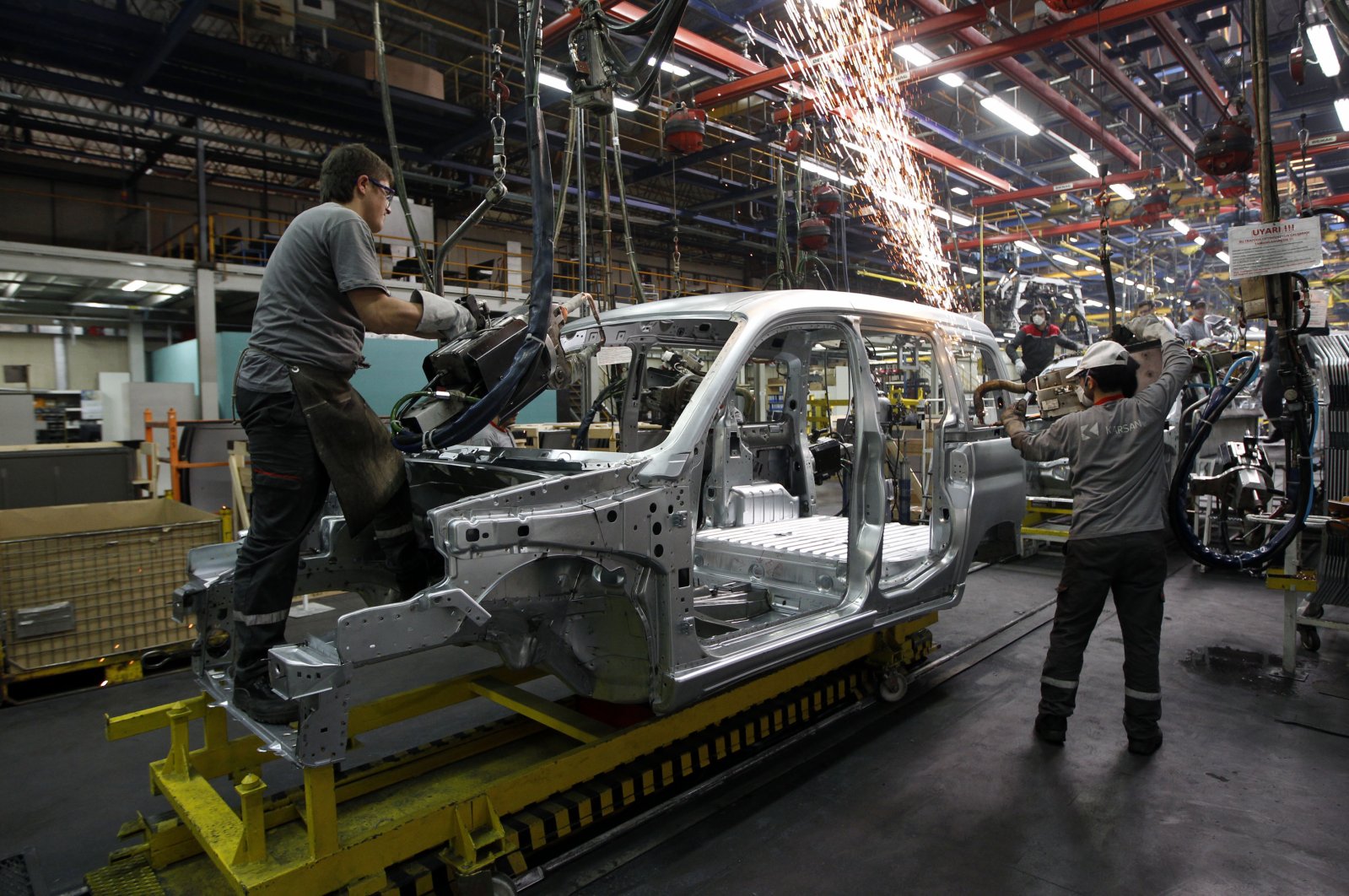 Employees work on the assembly line of the Karsan automotive factory in Bursa, Turkey. (Reuters Photo)
by Alen Lepan May 27, 2020 12:28 pm

Automakers in Turkey have shifted their hope toward postponed domestic demand as they slowly return to normal, with the expectation that revivals of their key export markets, primarily hard-hit Europe, will take time

End of an era: New Fiat Doblo production shifts to Spain from Turkey

The automotive industry is facing its worst crisis in decades as strict lockdown measures to contain the coronavirus pandemic froze production at factories and closed most dealerships across the world amid a precipitous drop in consumer spending.

Despite a major slide in March and April, Turkish automakers believe deferred demand is building in the domestic market, which has been contracting by around 50% over the last two years, as expectations related to a more rapid normalization, thanks to the country's successful management of the pandemic, will help quickly revive the sector.

Demand had a serious drop in the second half of March when the outbreak started affecting social life and the commercial environment after the country reported its first coronavirus case on March 11. Automakers started gradually shutting down factories and halting production on March 20 in a move that was first planned to last two weeks but ended up lasting through most of April.

Factory production was not completely halted as there was still demand from consumers in the Far East and South America and some automakers that took up humanitarian projects such as making ventilators.

Top international automakers – including Ford, Honda, Hyundai, Mercedes, Renault and Toyota – have factories in Turkey. The facilities started gradually resuming operations on April 13, with all having reopened by May 11.

The first market impact could be seen in March as automotive production in the country slipped by 22% and further plunged by 91% in April, according to Automotive Manufacturers Association (OSD) data. The industry saw a production loss of some 150,000 units over the two months, OSD Chairman Haydar Yenigün told Daily Sabah.

Overall 2020 production between January and April dropped 28% year-on-year the data showed, with some 352,309 vehicles, including automobiles and commercial vehicles, being manufactured in the period.

Carmakers in Turkey produced a total of 1.46 million passenger cars and commercial vehicles in 2019, according to OSD data, a 6% year-on-year decline.

"With the effect of the pandemic, we anticipate that total vehicle production in Turkey will decrease by 26% this year compared to 2019 and will realize at around 1.077 million units," Alper Kanca, the head of Automotive Suppliers Association of Turkey (TAYSAD), told Daily Sabah.

"There was almost no vehicle production at all in Turkey and Europe in April," he stressed.

Kanca said the expected global automotive sector revival in 2021, after contracting this year, will not overtake 2019 levels.

"If we interpret the information today, we can say that global production will remain at the level of 72 million units in 2020, a decline of 22% from the previous year. Even though it posts a 15% increase to 83 million units in 2021, it won't be possible to reach 2019 unit production," he stressed.

According to the latest report by London-based global data firm IHS Markit, worldwide auto sales in 2020 are projected to decline more than 20% year-on-year to 70.3 million units.

The recovery period involves many variables as the sector returns to normal, according to Yenigün. Factories are currently continuing their production at an average capacity of 60% due to COVID-19 measures and the fact that demand is just beginning to revive, he explained.

"In the first stage, a slow and controlled production model, followed by a gradually increasing period, is planned. However, declining demand, slowing trade and heavy manufacturing processes pose a serious cost burden on the automotive sector," the OSD chairman noted.

Reviving the stagnating domestic market and increasing demand that came to a halt in export markets are the most important steps to returning to normal, Yenigün said.

According to the OSD chairman, however, "We anticipate that the revival of our export markets will take some time."

"In this context, the rapid deployment of measures to stimulate the domestic market will have a decisive effect on the upward movement of demand," Yenigün noted.

The industry also observes that individual car use is increasing, and will continue to do so as there remains a need to social distance, which Yenigün said would boost consumer demand.

"We also anticipate that the necessity to social distance will increase not only the demand for individual cars but also the demand for commercial vehicles used in passenger transport," he added.

He said all these processes that boost interest in the domestic market, however, need to be supported economically. "It is critical to take actions such as tax arrangements, cash support and postponing regulation transition to stimulate domestic demand."

Turkey imposed weekend stay-at-home orders, closed restaurants and schools, mostly sealed its borders and halted some travel between large cities to curb the spread of the virus.

The government has begun rolling back some restrictions and said it aims to reopen the economy heading into June.

Passenger and light commercial vehicle sales in Turkey were up 26.3% in the January-April period year-on-year to 150,869 units, according to Automotive Distributors Association (ODD) data. Sales fell by 14.6% to 26,457 units in April following supply shortages and stock problems due to the coronavirus pandemic halting production and exports to Europe.

In contrast, European car sales bottomed out last month as measures to contain the virus across the continent caused sales to collapse by an unprecedented 76%, according to the European Automobile Manufacturers Association (ACEA). Sales for the first four months of the year were down 39%. Carmakers across the continent sold just 270,682 vehicles last month, compared with 1.14 million a year earlier, the ‘’strongest monthly drop in car demand since records began,’’ the ACEA said.

Southern Europe was the hardest hit with new car registrations down 97.6% in Italy and 96.5% in Spain, as both countries struggled with some of the highest levels of coronavirus infection in Europe. France saw an 89% contraction, while Germany suffered a 61% drop.

Like March’s 55% drop, the decline was far worse than even the 2008-2009 global financial crisis, which triggered a six-year slump in car purchases. The steepest losses during that financial crisis occurred in January 2009, when sales fell 27%.

The industry in Turkey had faced multiple problems after high volatility in foreign exchange rates in the second half of 2018, followed by a high increase in interest rates on loans, led to a sharp decline in domestic demand.

Last year was rather difficult for the industry, as passenger car and light commercial vehicle sales declined by 22.8% year-on-year to 479,060. Several measures, including tax exemptions, incentives and a loan discount campaign by public lenders, brought some relief.

The industry's production in Turkey initially declined because of a sudden decrease in demand from export markets, Yenigün said, referring to the collapse of interest in Europe.

Roughly 85% of the sector's production was being exported, of which 80% goes to European countries. Because the continent came to a near standstill, the Turkish automotive industry saw its exports to the region slide significantly in March and April. Sales were down 29% in March, dropping a further 77% in April, Yenigün explained, stressing that the situation led to the industry, which championed Turkey's sectoral exports for 14 straight years, to drop to fourth place in April.

In the forecast at the beginning of the year, the OSD had estimated that 2020 exports would be parallel to the previous year, a domestic market increase of 18% and these to have a 1% overall effect on production.

"Today, our projections are that the domestic market will be at a similar level with 2019, but exports will contract by 27% to 28% and production will fall by 19% to 20%," Yenigün said.

"When we look at our sector exports as of the end of April, we see that the supply industry has realized 57% of the total sector exports in the month, despite experiencing a 63% decline compared to the same period of the previous year," TAYSAD's Kanca said. The industry's exports could drop some 20% this year, he added.

The industry's $10.6 billion in foreign sales held a major share in the overall exports of Turkey's automotive sector, which came in at $31.2 billion in 2019.

The turnover loss to the automotive supply industry in 2020 is likely to exceed $3.6 billion, Kanca lamented.

Meanwhile in the rental car sector, the impact of the slowdown started being felt in the beginning of March, according to Turkish Auto Leasing and Rental Companies Association (TOKKDER) Chairman İnan Ekici.

The sector had added some 7,850 vehicles to its fleet in the first quarter of this year, or 7.5% of the all the new cars sold in the country in the period, according to the "Operational Leasing Sector Report – 1st Quarter of 2020," which was prepared jointly by TOKKDER and Nielsen, a global marketing data research firm.

The operational leasing sector contracted 13.4% year-on-year in the first quarter and 5.1% compared to the end of 2019, the report reveals. The sector's total asset size amounted to TL 29.28 billion, with the number of vehicles in the fleet reaching some 264,000.

Ekici said as early as March, consumers began holding onto their rental cars due to the pandemic. "Today, individuals who use rental vehicles do not want to leave them because they do not want to use public transportation," he noted.

Companies that lease vehicles, on the other hand, are not returning rentals that were rendered affordable when interest rates had fallen, even though their businesses are shrinking and despite the fact that their contracts expired, in the belief that this is a temporary situation, Ekici explained. "We have the impression that as long as the pandemic does not last for too long, there will not be a very serious problem with long-term leasing," he said.

End of an era: New Fiat Doblo production shifts to Spain from Turkey