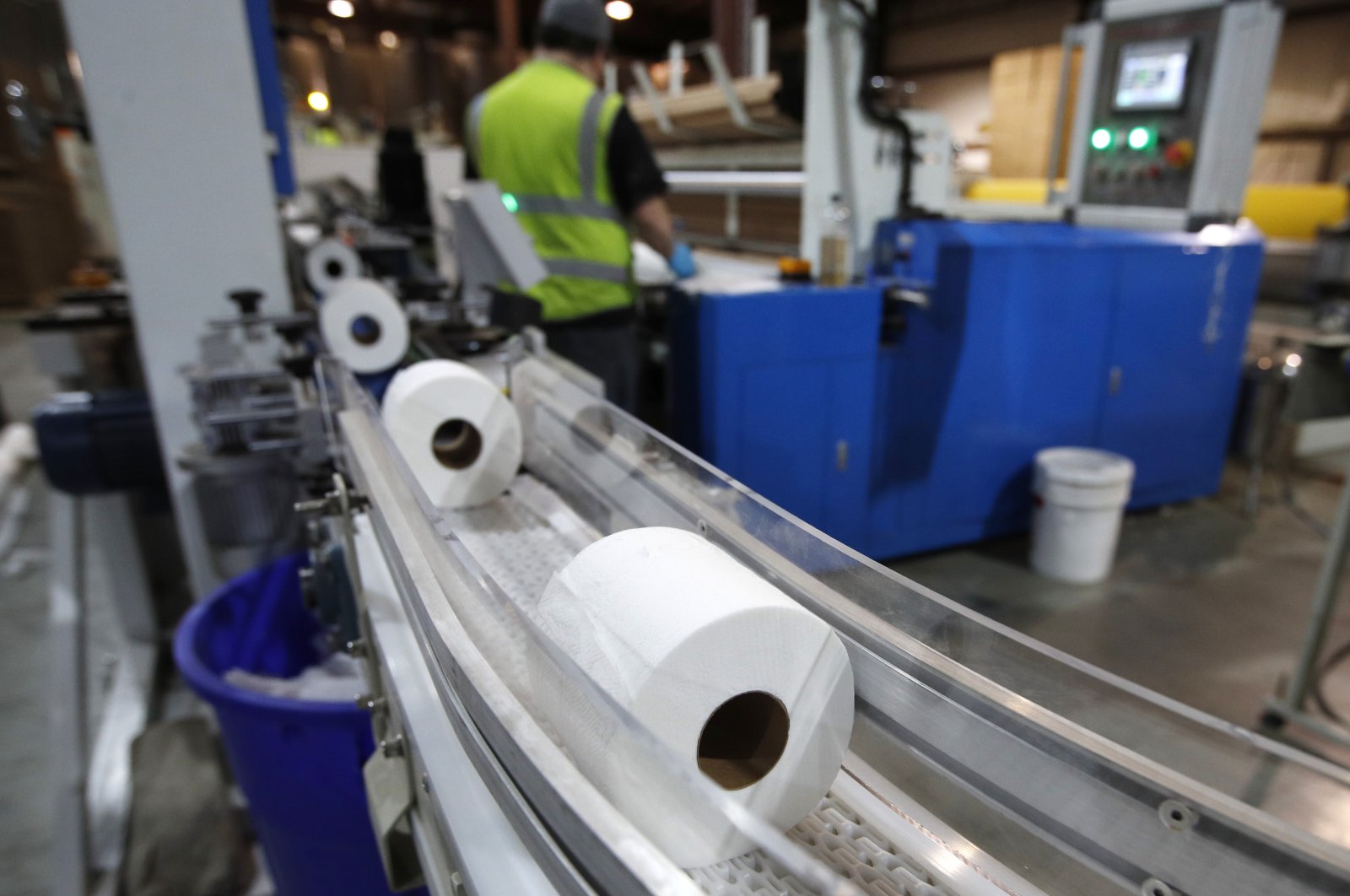 Toilet paper moves out from a cutting machine at the Tissue Plus factory, Wednesday, March 18, 2020, in Bangor, Maine. The new company has been unexpectedly busy because of the shortage of toilet paper brought on by hoarders concerned about the coronavirus. (AP Photo/Robert F. Bukaty)
by German Press Agency - DPA Mar 20, 2020 3:42 pm
RECOMMENDED

As cases of the coronavirus continue to climb, nothing feels more surreal than the irrational stockpiling of toilet paper, even though experts tell us it isn't necessary and manufacturers say there is no shortage.

Whether it stems from a herd mentality, reading social media posts about toilet paper fights, or an overwhelming sense of helplessness, one thing is certain: the panic buying of toilet paper has prompted bidet sales to soar.

While many have long been resistant to bidets – a common feature in European and Middle Eastern toilets where jets of water clean you off instead of toilet paper – the spread of the coronavirus seems to be changing long-held views on self-washing.

It's not for lack of interest. Several years ago at Dwell on Design, a long line of attendees waited to take a peek at Toto's washlet, a toilet-bidet hybrid with warm water spray, heated toilet seat and a mind-numbing (for the uninitiated) control panel. In 2016, Kylie and Kris Jenner professed their love for their Toto Neorest 750H, a bidet that now retails for more than $13,000 on their "Keeping Up With the Kardashians" reality show and Instagram feeds.

Today, bidets are being manufactured for more than just high-end consumers, as interest in sustainable products and water conservation has grown. According to Tushy, a company that makes and sells bidets, Americans use more than 34 million rolls of toilet paper every day, which translates to about 54 million trees.

Inexpensive entry-level styles of the Toto washlet bidet seat can be found at big box stores like Home Depot, Wayfair and Lowes for as low as $250. Plus, new affordable alternatives, like the Tushy bidet, allow you to clip on a bidet attachment without electricity or plumbing, as it draws water from the toilet's supply line. On EBay right now, they are $79 for a classic bidet and $109 for the warm water spa version, easily affordable considering the constant need to renew a supply of toilet paper.

As toilet paper has become scarce, Tushy's sales have soared. Both of their bidets, as well as Tushy's line of bamboo toilet paper, were available online on "Black Friday" but were sold out by Saturday. Pre-ordering is now available with shipping expected in late April.

"Tushy's sales over the past few weeks have grown from double to triple to more like 10-times what they were in weeks before word spread about TP shortages," said Jason Ojalvo, CEO of Tushy. "This could be the tipping point that finally gets Americans to adopt the bidet. The reality is, once you use a bidet to clean after pooping you cannot go back to wiping and toilet paper. You've learned too much! Wiping seems not just inefficient, but also barbaric, by comparison."

Several manufacturers, such as BioBidet, Tushy and Brondell, sell portable travel bidets for as low as $14.99. Brondell, which sells bidet attachments, hand-held bidet sprayers and luxurious bidet seats, has also seen a boost in sales in the wake of the pandemic.

"Overall, we have seen our sales demand increase about 300% over the past week across all of our retail channels," said Daniel Lalley, communications director for Brondell. "In the midst of this unprecedented toilet paper run, we're really grateful for the opportunity to provide those who need them with smart solutions for toilet paper replacement. For the last 16 years, we've been passionate about educating the public on the environmental and cost benefits of switching from toilet paper to cleaner bidet alternatives."

He said the company has no shortage of bidets right now and doesn't foresee one in the future.

Meanwhile, the mad dash for toilet paper has created the nudge for self-quarantined consumers to seek out bidets like Sonny, a Los Angeles startup that is in the process of developing a portable, personal handheld bidet.

Sonny founder Zack Levinson says he has seen an increase in sales over the past week despite being in preproduction. "With all of the precautions people are taking, behavior change is inevitable at a time like this," he says. "We will not be shipping for a couple months. People have been seeking us out organically, which has been an encouraging and positive sign of a new cultural shift in the bathroom, which has only been accelerated by the developing COVID-19 pandemic."