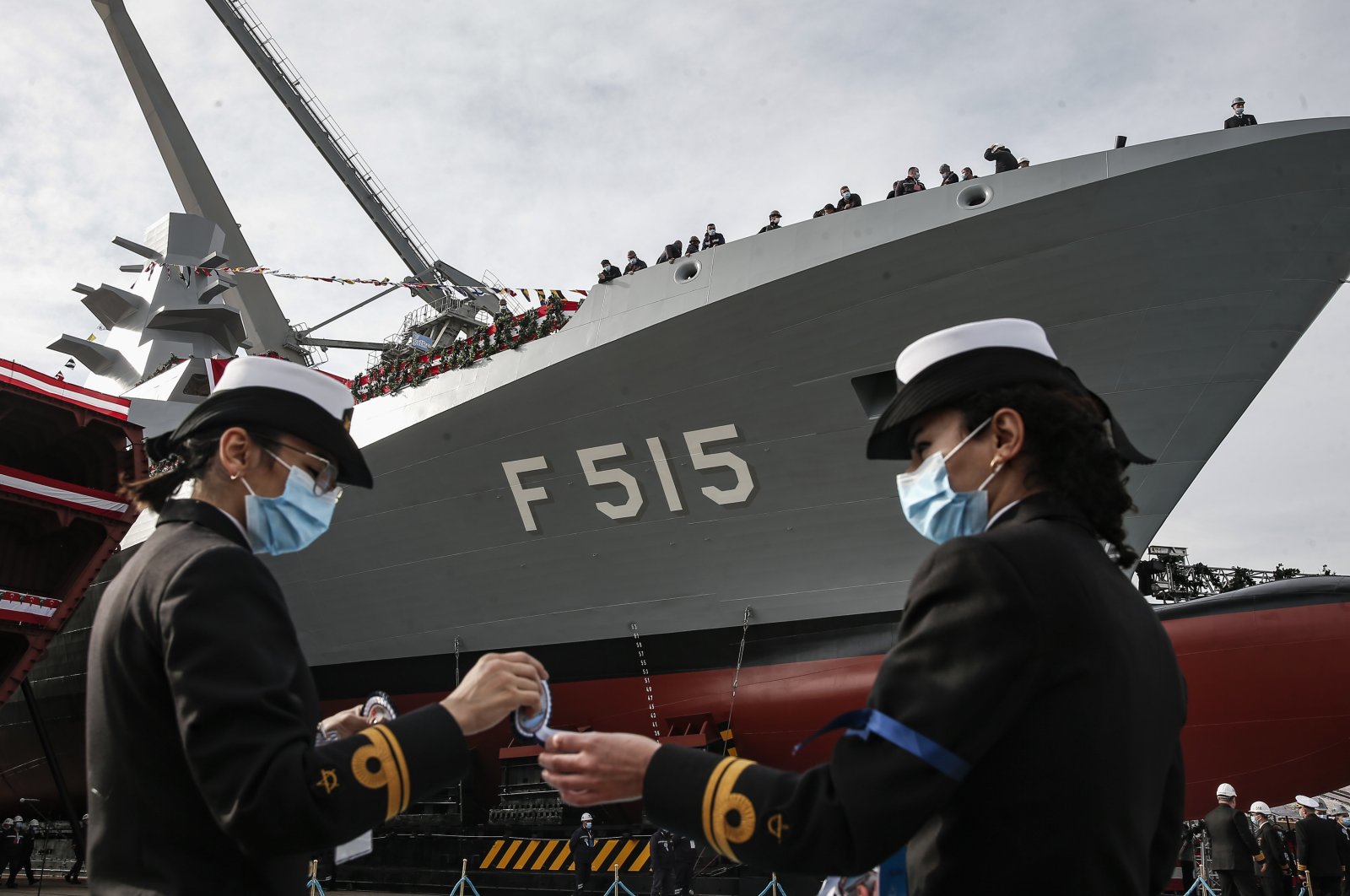 The TCG Istanbul, launched Saturday as the first frigate and largest warship domestically designed and manufactured by Turkey, is an excellent example of the country's progress in the defense and naval industries. The ship was produced through close public-private cooperation, the efforts of all main and subcontractor companies and the contributions from small- and medium-sized enterprises (SMEs).

The Istanbul Frigate (F-515) was developed within the scope of the country’s National Ship Project (MILGEM) as the fifth vessel manufactured under the project, while the sixth and seventh vessels are on the way, President Recep Tayyip Erdoğan said Saturday during the launching ceremony. The TCG Istanbul, which includes different features than the previous four corvettes, is a product of 70% local production.

Erdoğan said that Turkey is among the 10 countries that can design, build and maintain their own warships.

“We will bolster our naval power in five years with five major projects,” Erdoğan stressed.

Yusuf Akbaba, an Ankara-based defense analyst familiar with the subject, commented on the new features of the vessel. He said that the most important feature that differs the Istanbul Frigate from other MILGEM vessels is that on the I-class frigates, surface-to-air guided weapon (SAGW) or more specifically, shipborne medium-range air defense missile systems, are being used.

Additionally, he said, the national vertical launch system (MDAS) will be used for the first time on the TCG Istanbul.

“It was previously stated that the MK41 VLS will be purchased from the U.S for the TCG Istanbul,” Akbaba told Daily Sabah Sunday, however, this changed due to the U.S. embargo that prevented the purchase, accelerating domestic work to develop such systems within the country.

Ismail Demir, head of the Presidency of Defense Industries (SSB), said during the ceremony that they “maintain the works to ensure 100% local and national production, especially in critical technologies and strategic areas.”

Along with Aselsan, Turkey's leading defense company Havelsan is a main business partner in the frigate project. The project also has around 80 subcontractors producing more than 150 systems. Around two-thirds of those subcontractors are domestic. The majority of domestic suppliers working on the projects, other than the manufacturing company STM Defense Technologies Engineering and Trade Inc. and its main business partners, are SMEs. Two-thirds of these are industrial producers and the rest are technology-oriented suppliers.

Demir also said during the ceremony that those projects, including the frigate project, “are implemented through a wide network of cooperation with main and subcontractor companies, SMEs, universities and research centers under the coordination of our presidency, with the support of our Naval Forces Command and relevant public institutions.”

Along with the launch of the Istanbul frigate, Saturday’s ceremony also marked the groundbreaking of the third ship to be constructed for the Pakistani Navy under the MILGEM project. Erdoğan pointed out the exceptional defense relations between the two countries, which “has great potential.”

“We are moving a historical brotherhood between Turkey and Pakistan one step further. Just like Turkey, Pakistan also struggles against many terrorist threats in a difficult region. I believe that both countries can help each other in defying these threats,” he said.

The MILGEM project was initiated in 2000 to locally design and build a fleet of multipurpose corvettes and frigates that will replace older ships. Turkey has built four corvettes so far in line with the program, namely the TCG Heybeliada, the TCG Büyükada, the TCG Burgazada and the TCG Kınalıada, while the fifth vessel, the first MILGEM I-class frigate of its kind, the Istanbul Frigate, was recently added to the inventory of the Turkish military with Saturday’s ceremony.

Erdoğan said the number of projects in the Turkish defense industry has taken a significant leap from 2002, increasing from 62 to almost 700. With this increase, according to the president, Turkey has become a country that develops its domestic industry but also meets the needs of its allies.

MILGEM was of the most crucial projects that lead Turkish Naval Forces (DzKK) toward the aim to bring the Turkish navy to the upper league, from a navy capable of medium-scale regional power transfer to a "navy with medium-scale global power transfer capability,” which was announced in 2015 in the navy’s strategic report.