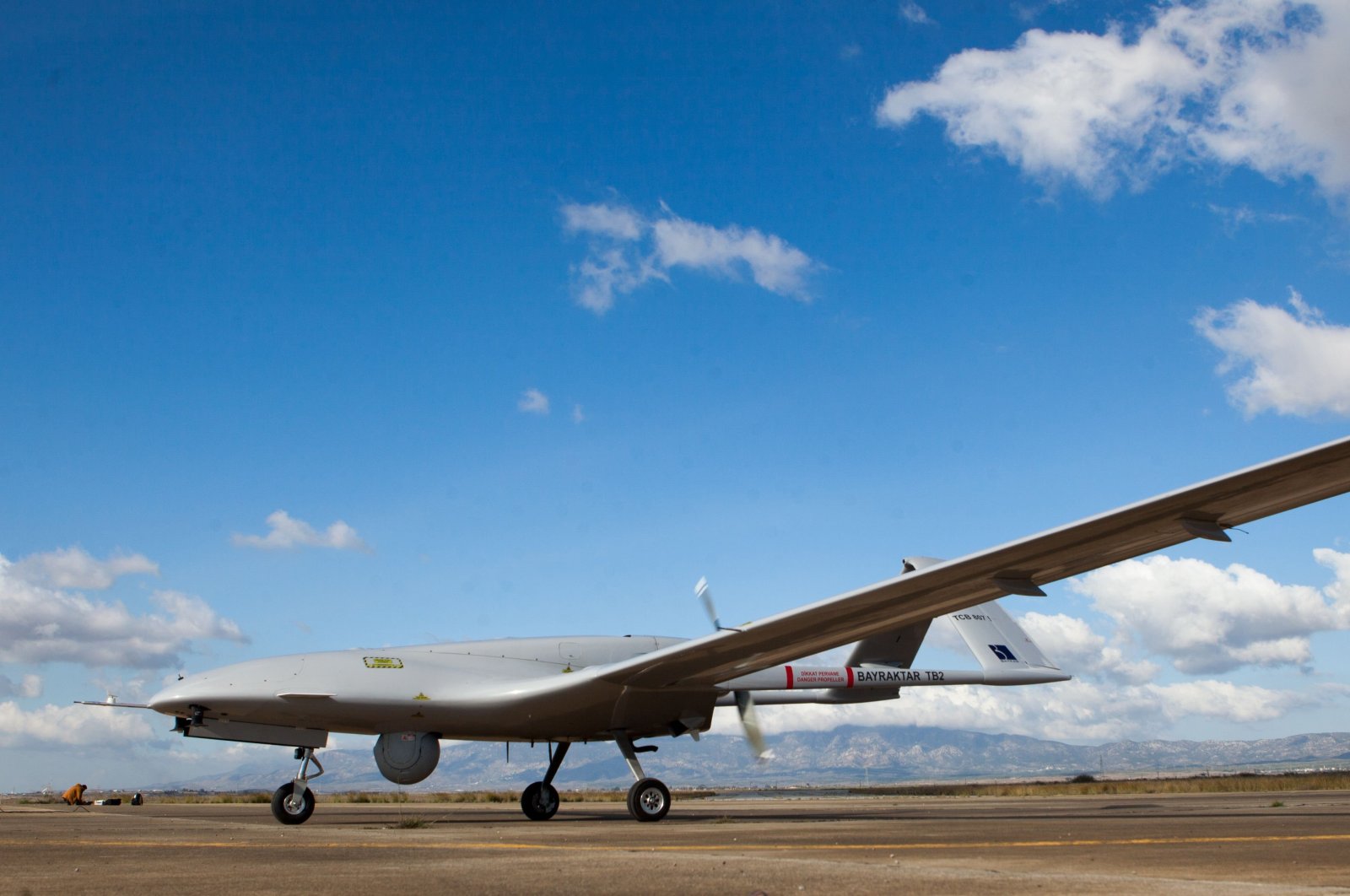 A Turkish-made Bayraktar TB2 drone stands at the Geçitkale military air base near Famagusta, Turkish Republic of Northern Cyprus, Dec. 16, 2019. (AFP Photo)
by Daily Sabah with DPA May 22, 2021 12:01 pm
RECOMMENDED

This is the first time a NATO member will acquire Turkish drones.

The combat drones will be armed with anti-tank projectiles. Poland will also buy a logistics and training package along with the aircraft. First shipments will arrive in 2022.

The drones have assault capabilities and have "proven themselves in wars in Eastern Europe," Blaszczak said. He added that the UAVs would be serviced by a military company, without giving further details.

The minister on Wednesday teased the acquisition of the Turkish drones on Twitter.

“Very soon we will see the Bayraktar and Anka UAVs from Turkey flying in the European skies,” Varank said.

The contract for the drones is expected to be signed during a visit by Polish President Andrzej Duda to Turkey on Monday and Tuesday.

Duda is set to arrive upon invitation by President Recep Tayyip Erdoğan. The leaders and their delegations will discuss bilateral relations as well as steps to be taken to further improve cooperation, a statement by the Presidential Communications Directorate said Sunday.

During the talks, the two sides will exchange views on current, regional and international developments, and are also envisaged to sign agreements that will strengthen the foundation of bilateral ties, the statement added.

European countries, including Albania, Belarus, the U.K., Bulgaria, the Czech Republic and Hungary, with whom Turkey shares good defense relations, are all said to be among potential customers of the combat drones.

Developed by leading drone manufacturer Baykar Makina, the drones are currently in active use in Turkey, Qatar, Libya, Ukraine and Azerbaijan. Erdoğan said in March that Saudi Arabia was also interested in buying Turkish drones.

Bayraktar drones played an important role in the recent Azerbaijani victory against Armenia in the war for the liberation of Nagorno-Karabakh.

Polish foreign military contracts typically go to American firms. In fiscal 2020, Poland placed orders for $4.7 billion worth of American military equipment, according to the data from the Defense Security Cooperation Agency.

The Bayraktar – with its electronic, software, aerodynamic, design and sub-main systems fully designed and developed nationally – stands out as the world's most advanced UAV system in its class with its flight automation and performance.

It has a record altitude of 27,030 feet for over 24 hours in the air and can carry 150 kilograms (over 330 pounds) of cargo. It can operate day and night with useful loads.

Performing active reconnaissance, surveillance and intelligence flights, the Bayraktar has the ability to transmit the images it obtains to operation centers without delay and to attack targets with its munitions.

The drone was first delivered to the Turkish Armed Forces (TSK) in 2014 and upgraded with armament for the first time in 2015. It is currently used by the Gendarmerie General Command, General Directorate of Security Forces and the National Intelligence Organization (MIT) in their operations.