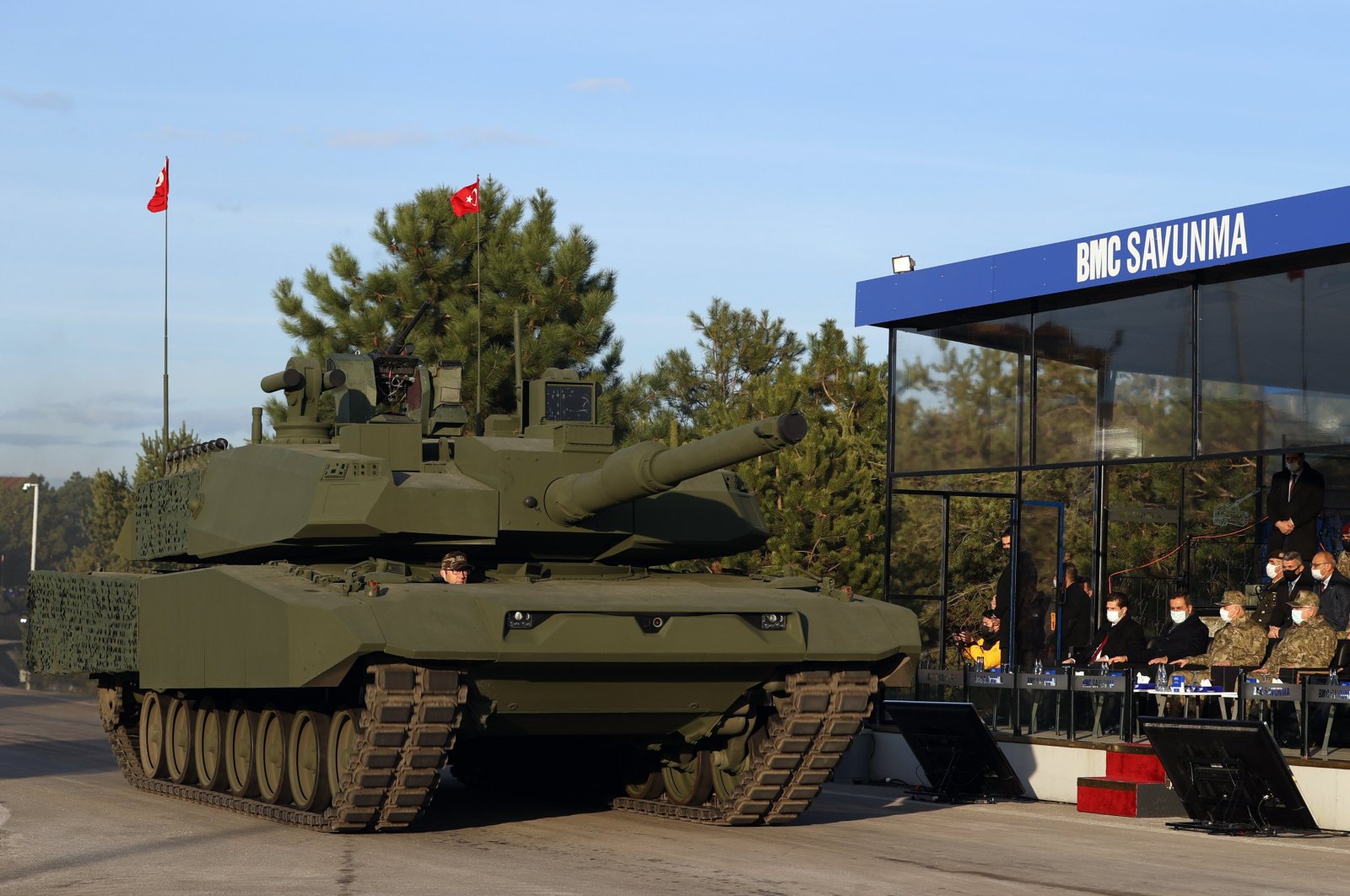 A Leopard 2A4 platform with the turret developed for Turkish Altay main battle tank mounted on top is being showcased at the Sakarya facility of leading land vehicle manufacturer BMC, in Sakarya, northwestern Turkey, Jan. 25, 2021. (DHA Photo)
by DAILY SABAH WITH AGENCIES Mar 15, 2021 1:57 pm
Edited By Ayşe Betül Bal
RECOMMENDED

Over the last five years, the number of international arms transfers has leveled off, but this does not necessarily mean that the world is moving toward decreasing the rate of its weaponization but rather that countries are now shunning imports and have begun producing their own weapons, according to yearly research released Monday.

Turkey’s arms imports between 2016 and 2020 fell by 59% when compared to the period between 2011-2015, the report by the Stockholm International Peace Research Institute (SIPRI), which releases data, research and publications on the international arms trade, showed. The report pointed out, among other things like the embargoes on the weapon sales, that Turkey’s increasing the domestic production of major weapons reduced its dependence on imports.

In terms of the world’s largest arms exporters, three of the world's five largest exporters – the U.S., France and Germany – actually increased their exports when comparing the period of 2011-2015 to 2016-2020, but these rises were offset by a drop in exports from the other two major exporters, Russia and China.

While exports remain at their highest level since the end of the Cold War, this is the first time since the period of 2001-2005 they haven't risen overall.

Yearly comparisons are often less informative since individual years can include major weapons systems like submarines or fighter jets, causing spikes and drops that are not the result of policy changes, Wezeman said.

The United States, the world's largest exporter of weapons by far, saw its share of international arms transfers increase from 32% to 37%.

The rise further widened the gap with the No. 2, Russia, whose exports shrank by 22%, largely due to a drop in exports to India, though it still accounted for a fifth of the world's arms exports.

France's exports grew by 44%, leading it to account for 8.2% of global exports.

As for Turkey, its arms imports fell by 59% between 2011 and 2015, and 2016 and 2020. According to the report, one of the major factors, along with the increase in domestic production, was the U.S.’ halting deliveries of F-35 combat aircraft to the country in 2019, after Turkey imported Russian air defense systems.

Washington unilaterally removed Turkey from the F-35 Lightning II jet program in 2019, arguing that S-400 air missile systems acquired by Turkey could be used by Russia to covertly obtain classified details on the Lockheed Martin F-35 jets and is incompatible with NATO systems. Turkey, however, insists that the S-400 would not be integrated into NATO systems and would not pose a threat to the alliance.

Most recently, Turkish officials announced that the country has inked a consultation agreement with a Washington-based law firm to lobby to protect its rights in the F-35 fighter jet program. Ankara-based SSTEK Defence Industry Technologies, owned by the Turkish Presidency of Defense Industries (SSB), Ankara's main defense industry authority, signed a contract with Arnold & Porter for "strategic advice and outreach" to U.S. authorities. Reuters reported that the six-month contract was worth $750,000 (TL 5.2 million) and started this month.

Meanwhile, the SIPRI report also showed Turkey ranked 14th in terms of defense exports between the years 2016 and 2020. Armored vehicles took the lion’s share in the country’s exports, followed by ships and aircraft. Among other defense equipment that Turkey sold abroad, there are artillery, engines, missiles and sensors.

According to the statements by Turkey’s Industry and Technology Minister Mustafa Varank earlier this year, Turkey’s exports in the sector, which were $340 million in 2005, have reached $3 billion. “Our defense industry project volume, which was $5.5 billion in 2002, has reached $60 billion today,” he also said at the time.

Ismail Demir, head of the Presidency of Defense Industries (SSB), also said at the time that they are currently carrying out 700 projects with defense firms worth $60 billion.

There were also shifts in where arms deliveries go, with a noticeable growing demand in the Middle East, which saw 25% growth for the period.

Saudi Arabia was the world's largest importer in the period, receiving 11% of arms imports, 79% of them from the U.S. The Middle Eastern kingdom, for instance, strengthened its air capabilities with 91 combat aircraft from the U.S.

In contrast, the world's second-largest importer, India, decreased its imports by 33%, "mainly due to its complex procurement processes, combined with an attempt to reduce its dependence on Russian arms," the authors said.

A decrease in a nation's weapons imports does not always signify a shrinking appetite, Wezeman stressed. In some cases, it's a question of pure budgetary limitations, or a cyclical effect of having recently upgraded a system, meaning it won't need to be updated for some years.

But another trend that has emerged is countries looking to substitute imports with domestically produced weaponry.

"That means that the arms imports, or the demand for arms imports go down, as they are able to do more on their own," Wezeman said.

In 2020, few areas of society escaped the impact of the COVID-19 pandemic, and while there were initial fears it would hit supply chains, those have largely not materialized.

"You would think it, and especially the economic effect that comes after, would have a very strong effect, but we haven't seen it," Wezeman said, noting that it was still early.

In the longer term, COVID-19 will likely see countries reassessing their budgets, and military spending will compete against other needs.

"But on the other hand, they have to balance that with their view on threats and tensions," Wezeman noted.

In many parts of the world, including Europe, there is "a very clear feeling that the world isn't getting safer," he added.

One potential compromise for countries, according to the researcher, could be that they would reshift to importing weapons, rather than the costly process of developing their own, which would then see arms transfers increasing again.