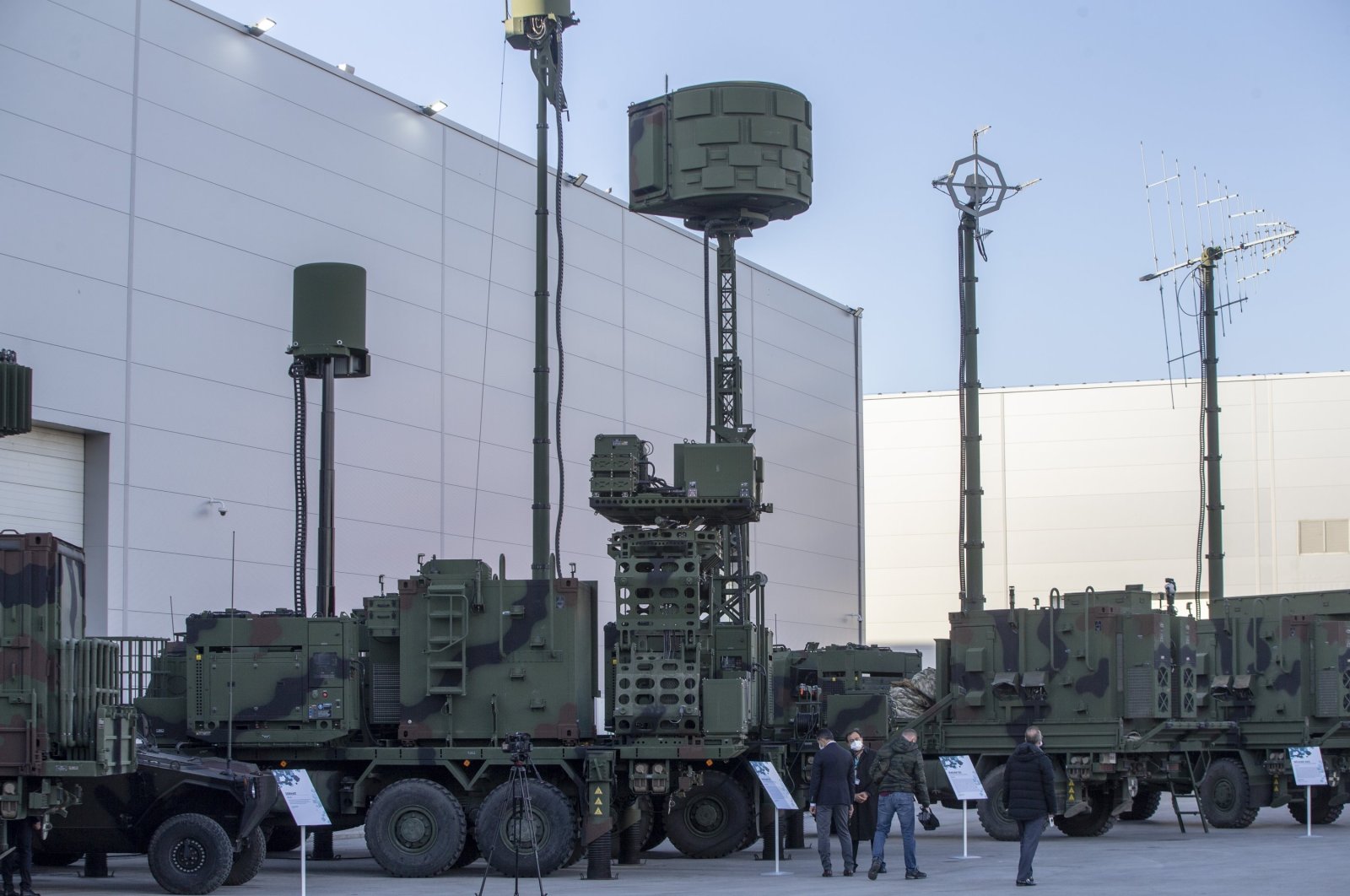 ASELSAN systems are on display at the company's new facility during its inauguration in the Gölbaşı district of the capital Ankara, Turkey, Nov. 12, 2020. (AA Photo)
by DAILY SABAH Jan 21, 2021 2:58 pm
Edited By Ayşe Betül Bal
RECOMMENDED

Thanks to the recent investments, most particularly those made in the last five years, Turkey’s defense industry will soon be among the major league players, Industry and Technology Minister Mustafa Varank said Thursday.

The minister added, “we will soon see” the Bayraktar and Anka unmanned aerial vehicles (UAV) purchased from Turkey "flying over European airspace” as well as operated by the EU countries.

The minister was speaking during a virtual defense industry meeting organized this year for the third time by the Istanbul Defense and Aerospace Cluster Association (SAHA) in cooperation with the Istanbul Chamber of Commerce (ITO).

“We started to receive the signals of this with our recent large-scale international sales,” Varank said, referring to the UAV sales made to Ukraine, Qatar, Azerbaijan and Tunisia.

He reiterated that U.K. Defense Secretary Ben Wallace uses the phrase "game-changer" every time he refers to the made-in-Turkey drones, which is a “clear acceptance of Turkey's superiority in this field.”

Emphasizing that Turkish companies are climbing to the top of the list of the world's most prestigious defense industry companies, Varank underscored that Turkey’s defense industry, thanks to all its stakeholders, will be in a much more decisive position in the region and the world, and will be “a country that determines the agenda rather than one that follows it.”

The minister highlighted that the defense industry guarantees independence for some countries, stating that the sector also has a great impact on economies and acts as a locomotive in scientific and technological developments.

Saying that the spending of the global defense industry exceeded $2 trillion (TL 14 trillion) as of 2019, Varank noted: “The turnover of the defense and aviation industry in our country rose to $12 billion. Our exports, which were $340 million in 2005, have reached $3 billion today.”

He stated that the rates of the products and parts produced locally are also increasing day by day.

TL 8 billion worth of incentives

Varank also spoke on the funds introduced for the financing needs of entrepreneurs, saying the ministry has taken important steps regarding the entrepreneurial ecosystem of the defense industry.

The ministry supported 813 defense industry projects worth around TL 5 billion with the programs carried out through the Scientific and Technological Research Council of Turkey (TÜBITAK), he said.

The Order-Based R&D Support Program, which has a high commercialization potential and provides co-financing support for customer-ready research and development (R&D) projects, is currently evaluating the process of 14 applications from the defense industry, Varank said, adding they will provide support of up to TL 2.5 million per project. He added that, through the Small and Medium Enterprises Development and Support Administration (KOSGEB), they have provided resources to 131 companies operating in the defense industry in the last two years alone.

The ministry issued incentive certificates for 346 projects with an investment of TL 8 billion in the last eight years in the field of the defense industry, Varank said, noting: “Thanks to these projects, we have opened the way for 6,700 new employment opportunities.”

Varank explained that the local defense industry has made immense efforts to be in a position to manufacture the products. The minister said that on the path to acquiring the technology it has today, the embargoes imposed on the country in past years acted as an important starting point to turn Turkish companies toward local production.

The minister also drew attention to the Defense Industry Executive Committee meeting in 2004, which he refers to as a major turning point.

“If President Recep Tayyip Erdoğan had not displayed a strong, brave and determined stance that day, we couldn't talk about the Turkish defense industry, which has become a brand today,” he said, noting that the Altay tank, Turkey's first domestically developed main battle tank, T129 Tactical Reconnaissance and Attack Helicopter (ATAK), Turkish Aerospace Industries (TAI)-made Anka unmanned combat aerial vehicle (UCAV) and Baykar-made Bayraktar UAVs and even the national infantry rifle “came as a result of the decisions of that day.”

“Our defense industry project volume, which was $5.5 billion in 2002, reached $60 billion today, thanks to those decisions,” he stressed.

Ismail Demir, the chairperson of the Presidency of the Defense Industries (SSB), also said during the webinar that Turkey is now meeting its defense needs primarily from domestic production.

He said, as the share of local products increase, it strengthens Turkey’s negotiating power.

Demir noted that considering the conditions that Turkey faces due to its geopolitical location and the foreign policy developments, it is now more important than ever for Turkey to have a strong defense capability and a defense industry that would back this.

The SSB head emphasized that economic strength cannot be achieved without a strong industry. Similarly, economic and political independence is not possible without a defense industry.

“We were mainly dependent on foreign purchases in 2002. Today, the defense industry has become one of the most important sectors in the country with unique products, exports, main contractors, small- and medium-sized enterprises (SME), research institutes and universities. Today, we meet our needs mostly from domestic production. Our most important goal is to reduce the external dependency completely, especially in critical technologies,” he said.

Demir said that they are currently carrying out 700 projects with defense firms that has a $60 billion volume.

‘Cooperation is not a choice’

Pointing out the importance of reducing costs and ensuring resource efficiency in a competitive environment, the industry minister further said that businesses should see cooperation not as a choice but as an obligation.

Varank said that as the ministry, they attribute great importance to specialized organized industrial zones (OIZ) and industrial zones for certain technologies, which strengthen the cooperation environment. He noted that the establishment of the Kırıkkale Arms Industry Specialized OIZ and the Ankara Space and Aviation Specialized OIZ, both of which are located in central Turkey, are among them.

SAHA Istanbul has also created an ecosystem for defense and aerospace companies and has conducted important studies to improve the competence of human resources in this field, the minister noted.

Referring to the importance of the human factor in economic and technological development, Varank said that they are taking steps to develop human resources through TÜBITAK.