‘Stab in the back’: Australia opts US nuclear fleet over French deal 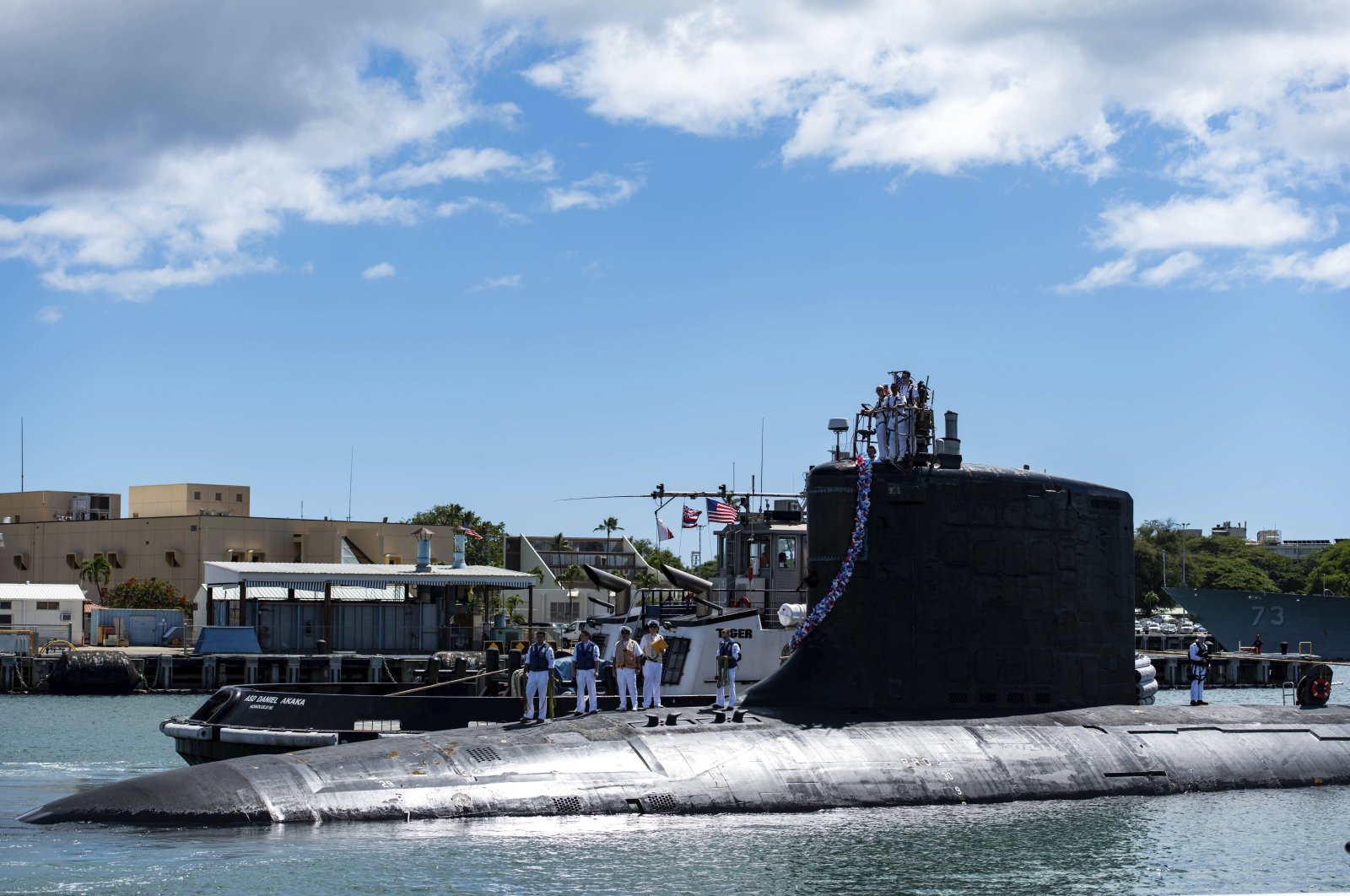 The Virginia-class fast-attack submarine USS Illinois (SSN 786) returns from a deployment in the 7th Fleet area of responsibility to Joint Base Pearl Harbor-Hickam, Hawaii, U.S., on Sept. 13, 2021. (AP Photo)
by Agencies Sep 16, 2021 9:14 am
RECOMMENDED

Because of a changed strategic environment, Australia decided to invest in U.S. nuclear-powered submarines and dump its contract with France that included the building of diesel-electric submarines, the country’s Prime Minister Scott Morrison said on Thursday.

President Joe Biden on Wednesday had announced a new U.S. security alliance with Australia and the U.K. – dubbed AUKUS – that would develop an Australian nuclear-powered submarine fleet.

As a result, Australia notified France that it would end its contract with state majority-owned Naval Group to build 12 of the world’s largest conventional submarines. Australia has spent 2.4 billion Australian dollars ($1.8 billion) on the project since the French won the contract in 2016.

Morrison said U.S. nuclear submarine technology wasn’t an option open to Australia when the AU$56 billion ($43 billion) deal was struck in 2016. Australia will be only the second country after the U.K. in 1958 to be given access to U.S. nuclear technology to build nuclear-powered submarines.

"Our world is becoming more complex, especially here in our region, the Indo-Pacific," said Prime Minister Scott Morrison, according to Reuters. "To meet these challenges, to help deliver the security and stability our region needs, we must now take our partnership to a new level."

Morrison said he told French President Emanuel Macron in June that there were “very real issues about whether a conventional submarine capability” would address Australia’s strategic security needs in the Indo-Pacific.

“Of course they’re disappointed,” Morrison said. “They’ve been good partners. This is about our strategic interest, our strategic capability requirements and a changed strategic environment and we’ve had to take that decision.”

“Our strategic environment has deteriorated,” Campbell said. “That challenging environment is becoming more challenging and is set to do so into the future at an accelerated pace.”

Australia had not yet decided what class of submarine it would select and did not know how much the nuclear fleet of at least eight submarines would cost, Morrison said.

But Morrison said Australia’s defense budget would grow above the current 2.2% of gross domestic product.

Unlike the nuclear-powered variety, conventional submarines on long transits from Australia to potential conflict zones in the Asian region have to spend time traveling on the surface where they are at their most vulnerable using diesel engines while they recharge their batteries. The batteries propel them underwater.

“But what we will acquire is better transit speeds and a greater operational endurance,” Barry said.

“Endurance in a nuclear-powered submarine is limited by the patience of the crew and the amount of food on board and of course it’s still limited but much, much greater (endurance) than what we acquire in a conventional submarine,” he added.

"We should call the first submarine in this new category the ‘Xi Jinping,’ because no person is more responsible for Australia going down this track than the current leader of the Chinese Communist Party,” Jennings said.

Beijing on Thursday slammed the new U.S. alliance with Australia and Britain, saying the submarines are an "extremely irresponsible" threat to regional stability.

The Western allies did not mention China when unveiling the submarine deal on Wednesday, but their intent was clear, with each referring to regional security concerns.

The announcement comes as Australia has been boosting defense spending with a wary eye on a rapidly rising and more assertive China.

Zhao added that the deal gave regional countries "reason to question Australia's sincerity in abiding by its nuclear non-proliferation commitments."

He urged the Western allies to "abandon their outdated Cold War zero-sum thinking" or risk "shooting themselves in the foot."

The first of the 97-meter (318-foot) Shortfin Barracuda submarines, an adapted French nuclear sub design, was to be delivered in 2027.

Morrison said he expected the first nuclear subs, which are to be constructed in the Australian city of Adelaide, would be built by 2040.

“It was really a stab in the back. We built a relationship of trust with Australia, and this trust was betrayed,” Le Drian said.

“I’m angry today. This is not done between allies," he added. "We are demanding explanations from both sides.”

Parly did not rule out France seeking compensation from Australia.

"We are studying all avenues," Parly told French radio RFI when asked whether France might seek compensation.

U.K. Defence Secretary Ben Wallace on Thursday said Britain was not out to "antagonize the French" but accepted their frustration about Australia's decision to scrap a submarine deal with Paris.

But Wallace told the BBC television: "I understand France's disappointment ... the Australians have taken this decision that they want to make a change.

"We didn't go fishing for that but as a close ally, when the Australians approached us, of course we would consider it. I understand France's frustration about it."

Wallace told Sky News separately France remained one of Britain's closest military allies, adding: "We have no intention of doing anything to antagonize the French."

Top French officials made clear they were unhappy with the deal.

“The American choice to exclude a European ally and partner such as France from a structuring partnership with Australia, at a time when we are facing unprecedented challenges in the Indo-Pacific region, whether in terms of our values or in terms of respect for multilateralism based on the rule of law, shows a lack of coherence that France can only note and regret,” Le Drian and Parly said in a joint statement.

Le Drian accused Biden of stabbing it in the back and acting like his predecessor Donald Trump.

"This brutal, unilateral and unpredictable decision reminds me a lot of what Mr. Trump used to do," he told France Info radio. "It's a break in trust and I am extremely angry."

Left out of the new alliance was Australia’s South Pacific neighbor New Zealand, which in the 1980s enacted policies and laws to ensure it remains nuclear-free. That includes a ban on nuclear-powered ships entering New Zealand ports, a stance which has seen it clash, at times, with the U.S.

Prime Minister Jacinda Ardern said Thursday that New Zealand wasn’t asked to be part of the alliance and wouldn’t have expected an invitation.

“The centerpiece, the anchor of this arrangement are nuclear-powered submarines,” Ardern said, according to remarks carried by The Associated Press (AP). “And it will be very clear to all New Zealanders, and to Australia, why New Zealand would not wish to be a part of that project.”

Ardern said the new alliance didn’t diminish its close ties to the U.S., the U.K., Australia and also Canada, which had been solidified through the Five Eyes intelligence-sharing arrangement.

Morrison said Ardern was the first foreign leader he called to explain the new alliance. He later called the leaders of Japan and India. The two countries combined with the U.S. and Australia form the Quad security dialogue.

“She was my first call because of the strength of our relationship and the relationship between our countries,” Morrison said. “All in the region will benefit from the peace and the stability and security that this partnership will add to our region.”

The Chinese government has long suspended minister-to-minister contact with Australia because of soured bilateral relations. But Morrison said he was willing to discuss the new alliance with President Xi Jinping.

“There’s an open invitation for President Xi to discuss these and many other matters,” Morrison said.

“I believe and hope we would both share the same objective of a peaceful Indo-Pacific where the sovereignty and independence of nations is understood and respected and that enables their own citizens to flourish,” he added.

“In particular, they should shake off their Cold War mentality and ideological prejudice,” he said.

Peter Jennings, executive director of the Australian Strategic Policy Institute think tank, said the submarine decision was a response to China’s takeover of the South China Sea, aggressive bullying of Australia and intimidation of Japan and Taiwan.

“We should call the first submarine in this new category the ‘Xi Jinping,’ because no person is more responsible for Australia going down this track than the current leader of the Chinese Communist Party,” Jennings told Australian Broadcasting Corp.

Australia would become the first country without nuclear weapons to obtain nuclear-powered submarines. Australia would discuss with the U.S. and the U.K. how the submarines’ nuclear waste should be disposed, Defense Department Secretary Greg Moriarty said.