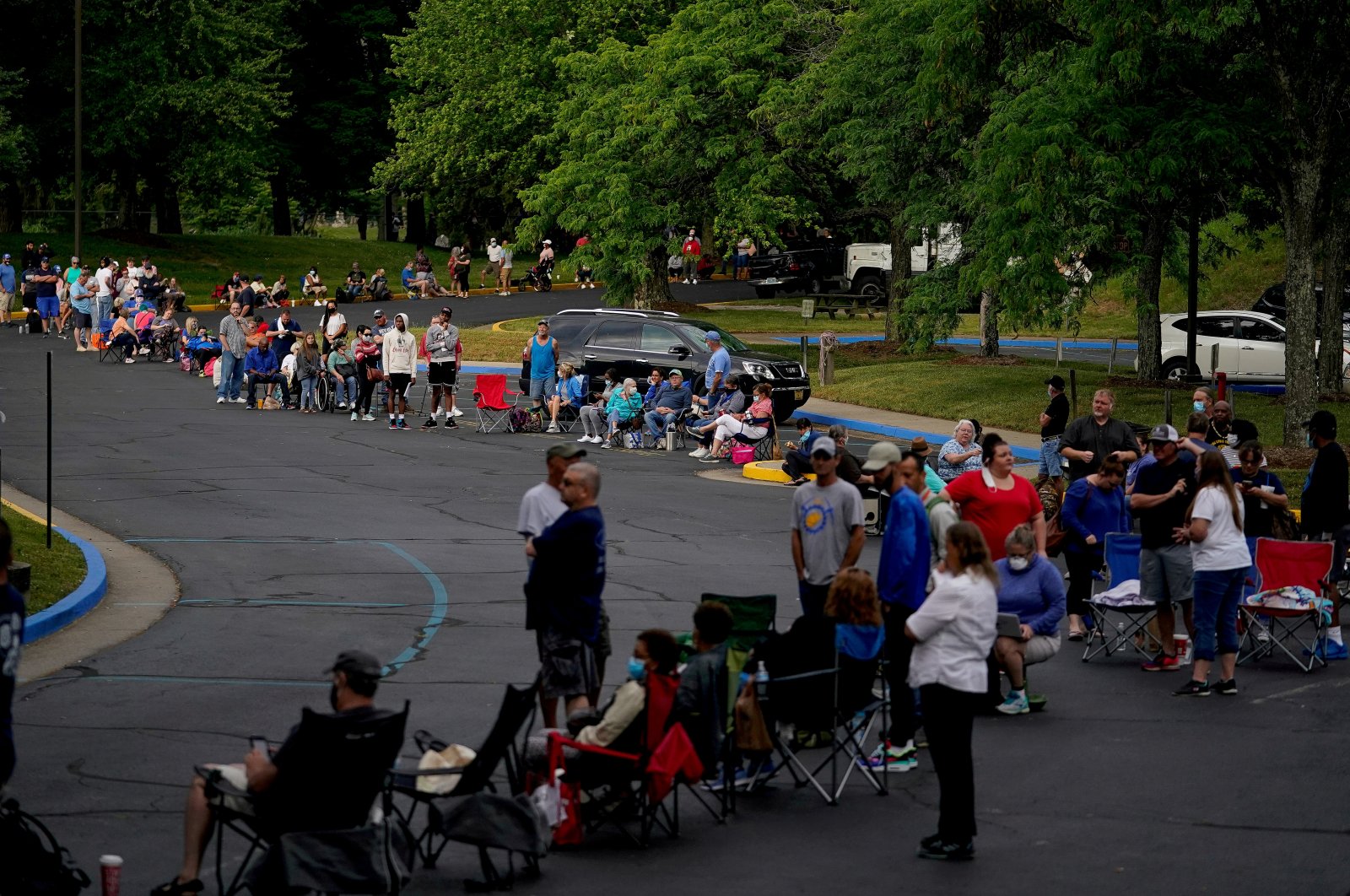 People line up outside Kentucky Career Center prior to its opening to find assistance with their unemployment claims in Frankfort, Kentucky, U.S., June 18, 2020. (Reuters Photo)
by Alen Lepan Nov 08, 2020 12:24 pm

Joe Biden's long list of campaign promises, including a new rescue package for the battered economy and undoing many Trump policies, will be tricky to accomplish and could be watered down should the Senate remain in Republican hands

By defeating President Donald Trump and becoming the 46th president of the United States, Democrat Joe Bide is positioning himself to inherit a nation in turmoil over the coronavirus pandemic and the related economic slowdown.

The former vice president returns to the White House in the midst of an economic crisis, and his economic agenda is likely to focus on trying to help the country overcome the pandemic.

From major spending to help the battered economy avoid an extended recession to major tax and regulatory changes, Biden has compiled a long wish list of actions he would like to take, including reversing some of Trump's policies.

Yet, many of his policies could be watered down should the Senate remain in Republican hands as large parts of his legislative agenda would likely be blocked.

“This outcome sees Joe Biden win the presidency and the Democrats retain the House but fails to overturn the Republican majority in the Senate,” says James Knightley, the chief international economist at ING.

Democrats’ hopes of flipping the chamber and giving Biden the leverage he would need to pass major legislation will likely rest on a pair of Senate runoffs in Georgia in January.

“There is less prospect of a major (and swift) fiscal stimulus, with Democrats having to work with Republicans on a quid pro basis,” Knightley told Daily Sabah.

This will dilute some of Biden’s plans, Knightley argues. But the economist says an effective legislative agenda is still possible, working with “moderate Republicans.”

“This would fit with the narrative that the focus would be on infrastructure investment first, rather than full steam ahead with the green energy project,” Knightley noted.

Biden has promised swift federal spending to help businesses and individuals, along with state and local governments, deal with the financial difficulties of the pandemic slowdown.

The number one focus he said would be getting COVID-19 under control in the country, which is the world's worst-affected. He argued that the economy cannot fully recover until COVID-19 is contained.

But much will depend on the approval of a new pandemic relief package and distribution of a vaccine that could be ready in early 2021.

Many U.S. states have been reporting record new COVID-19 infections, and nearly 6,000 Americans died last week from the disease caused by the virus.

The country on Saturday reported a record increase in COVID-19 cases for a fourth straight day with at least 131,420 new infections, taking its total caseload to about 9.91 million. It has reported over 230,00 deaths.

The U.S. economy is technically in recession and 3.5% smaller than it was at the beginning of 2020, even after noting a record 33.1% annual growth rate in the third quarter.

The overall economy and the job market are under intensified pressure from the accelerating pandemic, which has thrown millions out of work.

The outbreak is still surging across much of the country, and analysts fear a new round of lockdowns will curb economic growth prospects.

A trillion-dollar stimulus package passed in March somewhat helped temper some of the damage caused by business shutdowns to stem the spread of the pandemic but has since expired.

The failure of lawmakers to agree on any new rescue package has clouded the future for the economy. However, there is some hope that more economic relief can be approved during a post-election “lame-duck” session of Congress between now and early January.

Biden is also said to be looking to force government agencies to buy U.S.-made goods and services to help boost domestic manufacturing.

Other focuses include a $1.3 trillion infrastructure investment, increasing the minimum wage to $15 per hour, expanding paid medical and family leave, stepping up support for unions and expanding protections for “gig” workers.

The president-elect plans to reverse some key parts of Trump's legacy including his hardline immigration policies, efforts to dismantle Obamacare health care and Trump’s abandonment of certain international agreements such as the Paris climate accord.

Biden is proposing to expand “Obamacare” by adding a public option to cover more Americans.

He also promised that his green energy policies will create millions of jobs.

Yet a skyrocketing budget deficit is a looming obstacle for his administration. The deficit hit an all-time high of $3.1 trillion as the fiscal year ended Sept. 30, more than double the previous record, as the pandemic shrank revenues and sent spending soaring.

According to his earlier statements, Biden believes the highest federal tax should fall on the wealthiest with his tax cannon mostly pointed at the very rich.

He has promised to reverse many of the tax cuts Trump signed into law for corporations and wealthy individuals, though the changes require congressional approval.

All that would generate an estimated $4 trillion or more over 10 years, according to The Associated Press (AP).

All in all, a return to multilateralism and the preparedness to work more cordially with allies and trade partners could provide more certainty for multinational businesses, said Knightley.

“Overall, the backdrop should be modestly supportive for growth given a still sizeable fiscal stimulus and a more certain trade environment while President Biden will be constrained from implementing radical regulatory and tax changes,” he noted.

“Given that the fiscal deficit won’t widen as rapidly in the near term as under a blue wave and the threat of gridlock on so many issues, the growth story may not be as vigorous and yield curve steepening versus a blue wave,” Knightley said.

However, he added, on balance, “we are less likely to see the improvement in the fiscal position we are anticipating over the longer term in the Democrat clean sweep scenario due to a reduced prospect of tax hikes.”