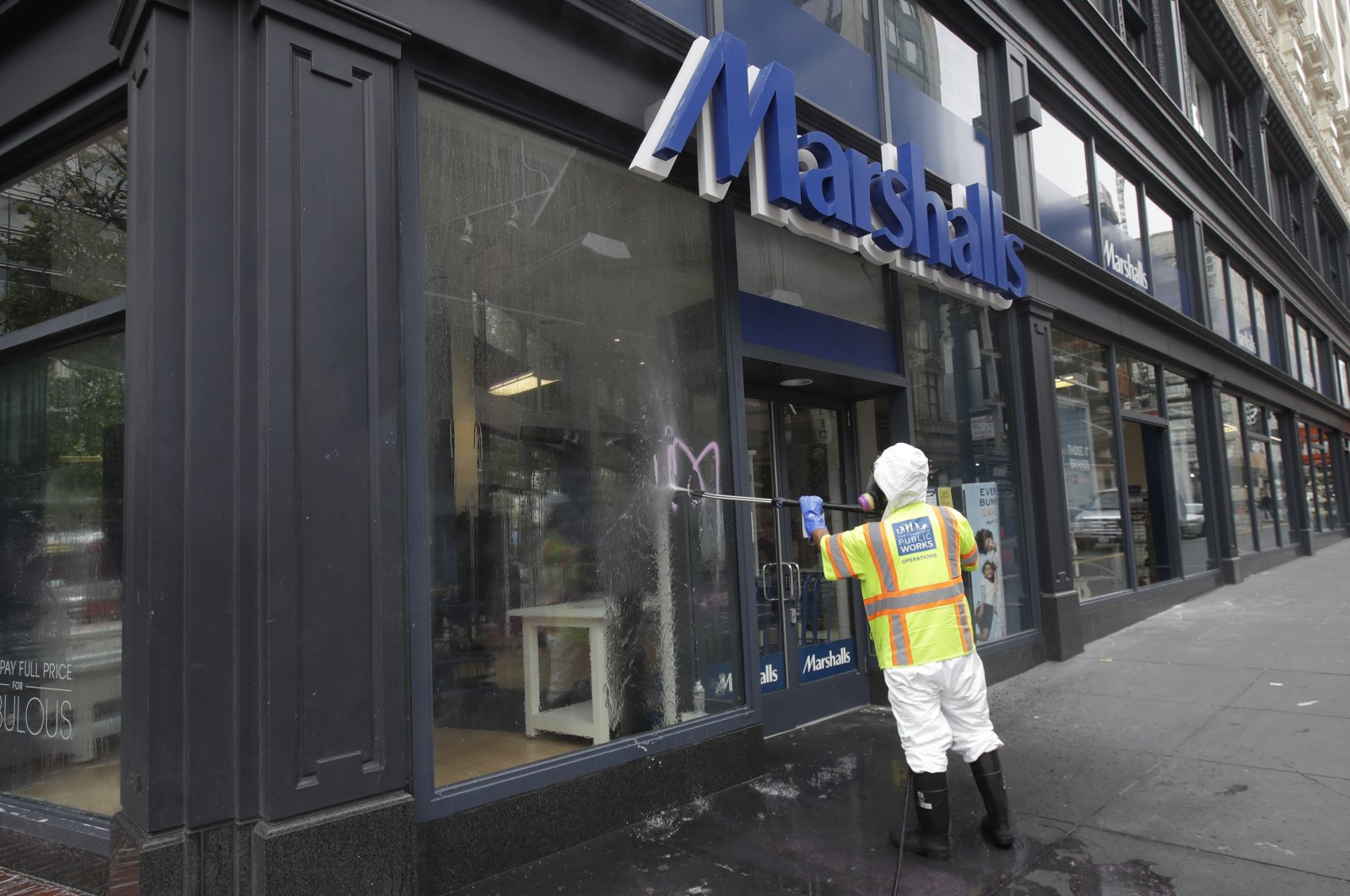 A worker with San Francisco Public Works sprays graffitti off the window of a Marshalls store in San Francisco, California, U.S., May 31, 2020, after protests over the Memorial Day death of George Floyd. (AP Photo)
by REUTERS Jun 02, 2020 3:04 pm
RECOMMENDED

A mountain of apparel stock has been piling up in stores, distribution centers, warehouses and even shipping containers during months of COVID-19 lockdowns. As retailers reopen around the world, they have to work out how to get rid of it.

Their main options? Keep it in storage, hold a sale, offload it to "off-price" retailers like TJ Maxx which sell branded goods at deep discounts, or move it to online resale sites. None are ideal, and all are damage-limitation.

Real estate company Knight Frank told Reuters it had fielded inquiries for excess stock for over 6 million square feet (557,500 square meters) of short-term let warehouse space in Britain since the pandemic took hold there in March.

Yet storage is only a realistic option for evergreen "basics" that are not tied to one particular year and could be sold at a later date should consumer demand bounce back – items like underwear, t-shirts, chinos and classic sneaker styles.

Apparel chains including British high-street retailer Next and German sportswear brand Adidas said they had stashed away unsold basics, with the aim to offer them to shoppers next year instead. But stowing away piles of inventory is risky.

"This is not like wine that gets better with age. Your inventory gets worse," said Emanuel Chirico, chief executive of PVH Corp, which owns Calvin Klein and Tommy Hilfiger, on a recent earnings call.

In the United States, clothing sales fell 89% in April from the same month in 2019, while in Britain clothing sales sank by 50% compared with an already-squeezed March.

Retailers hope that easing of lockdown measures will see shoppers return to stores, eager to unleash pent-up demand. But there is no guarantee that sales will rebound any time soon.

Many stores are likely to pursue a combination of holding sales as well selling stock to off-price retailers. The mix will depend on consumer appetite, how much merchandise stores have to shift and how fast they must free up space for new collections.

In-store discounts are usually a better option as dumping inventory in bulk to off-price players returns just pennies on the dollar for the retailers.

Off-price retail group TJX, which started opening its TJ Maxx and Marshalls stores this month, said in May there was "incredible availability" of stock on the market.

"Some of our customers are waiting for retail to open up to gauge their performance before they make a commitment on how much stock they want to write off," he said, referring to both selling at discount in-store and offloading to off-price.

Potentially more lucrative is moving merchandise to online resale marketplaces that take a commission on sales, although that option is largely only open for high-end brands.

"A number of these brands are set to go live in the next couple of months," she said, adding some may set up their own landing page on Tradesy while others would sell more discreetly.

Apparel was still the No. 1 category for spending cutbacks among U.S. consumers surveyed by Coresight Research on May 20. Non-essential retailers are set to reopen on June 8 in New York City and June 15 in Britain.

Even some shoppers are plotting a quick profit using resale websites.

The 43-year-old said she planned to snap up merchandise at a discount, to then resell it at a higher price online at a site such as California-based Poshmark, which also makes money by taking a commission on sales.

"I'm going to get a ton of stuff and either wear it once or put it on Poshmark," she said.