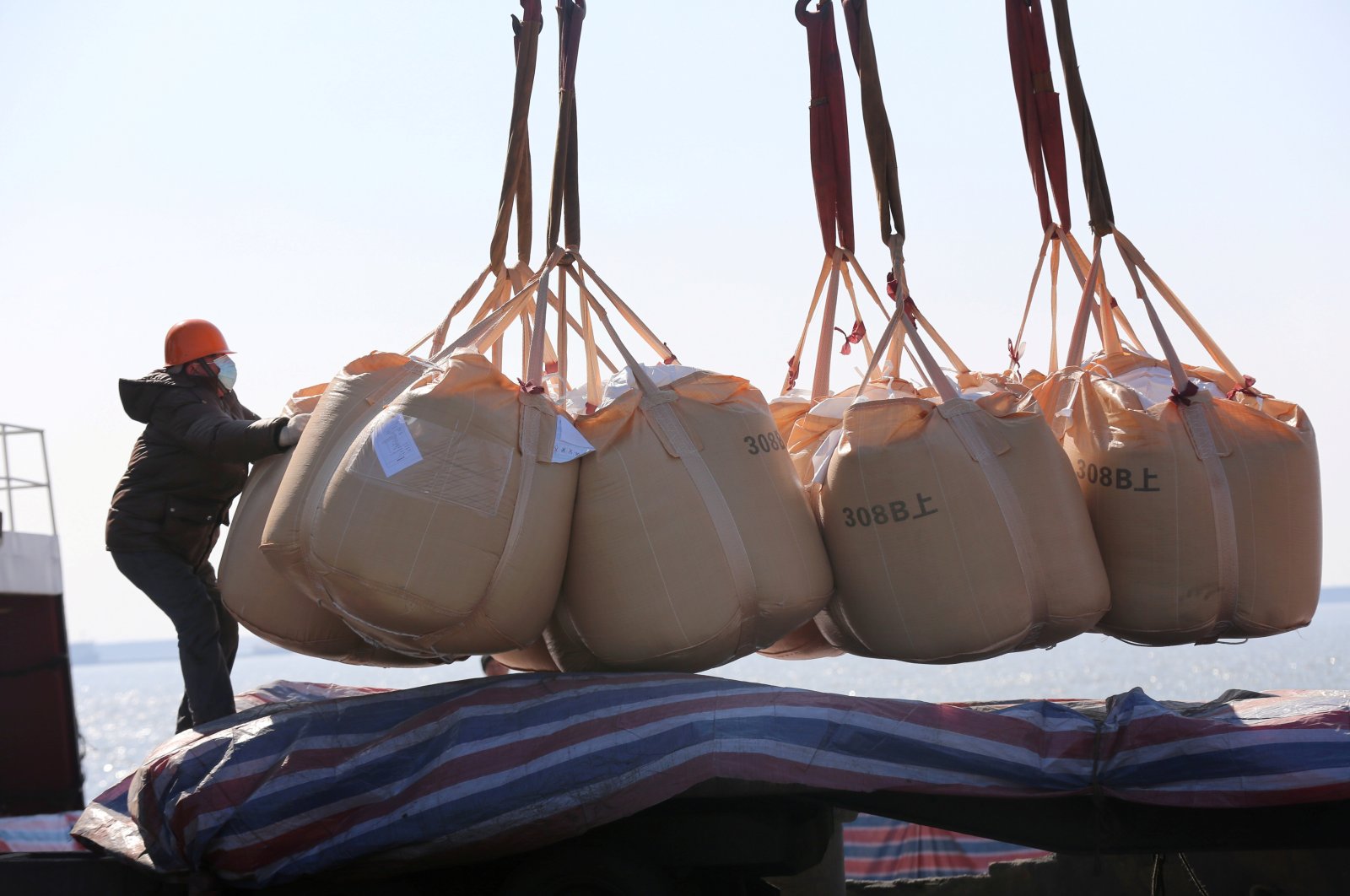 A worker wearing a face mask transports fertilizers for export at a port in Nantong, Jiangsu province, China, Jan. 31, 2020. (China Daily via Reuters)
by REUTERS Dec 09, 2021 10:57 am
RECOMMENDED

Soaring prices and the tight supply of fertilizers are putting key crops at risk, from Brazilian corn to Malaysian durians, prompting farmers to scrimp on vital crop nutrients, adding to fears related to global food security and inflation.

With global food prices at their highest in more than a decade, rising fertilizer costs will only add to pressures on food affordability, especially in import-reliant economies, while stretched budgets leave little room for government subsidies, said Frederic Neumann, HSBC's co-head of Asian economics research.

"At a time when COVID-19 already decimated the lives and livelihoods of untold millions, soaring food costs are hitting the poor especially hard," he said. "This raises the risk that higher fertilizer costs will not only hit farmers but will also be passed on to consumers via higher food prices."

Worse before it gets better

With the United Nations Food and Agriculture Organization's (FAO) food price index at its highest since 2011 – when high food prices helped foment the "Arab Spring" uprisings – the world's farmers are already under strain to increase food supply.

But analysts say fertilizer supply tightness will worsen early next year. European, North American and North Asian farmers all need to step up purchases ahead of spring planting, while key producers China, Russia and Egypt have curbed exports to ensure domestic supplies.

"Most stockpiles of urea are now secured, meaning global producers will be 'sold out' until Jan. 1," said U.S.-based Josh Linville, director of fertilizer at StoneX Group Inc.

"Producers start the new year very low on unsold inventories and they will be met by sizeable global demand in Q1 as U.S., Canada, Brazil, Europe, Asia all step forward to purchase."

In response, farmers across the world are either delaying purchases or reducing fertilizer use to save money.

So far, high crop prices have cushioned the blow for many growers, and some can switch from nitrogen-hungry wheat and corn to soybeans next season.

But in 2022, few crops or farmers will be spared, sources say.

In Germany, farmers hit by price increases are likely to reduce fertilizer use, which could lower harvest volumes "depending on the scale that this takes place," said Bernhard Kruesken, secretary-general of German farming association DBV.

"Crop types which achieved higher producer prices in past months will be in consideration for sowing," Kruesken added.

Brazil, the world's top soybean grower and third-largest corn producer, feeds 10% of the global population. The country has warned of a fertilizer shortage next year that is predicted to slow soy, corn and cotton farm expansions.

"Soy partially dodged it because a lot of inputs had been (already) purchased, but the second corn crop of the cycle is going to run head-on into that rise in fertilizer costs," said Andre Pessoa, partner at Brazilian agribusiness consultancy Agroconsult.

"For the 2022/23 cycle, I would say we are going to have some problems. I've told farmers the problem isn't even price anymore. Now it's guaranteeing availability."

Even in North America, home to some of the world's wealthiest farmers, growers have delayed purchases they usually make ahead of spring plantings, hoping prices drop.

Although weather conditions, disease, pests and water supply also are crucial in determining how crops develop, fertilizers are among the most potent production factors that farmers control.

But many growers, and especially the millions of smallholders who produce a third of the world's food, will have little choice but to reduce fertilizer usage in 2022.

In Southeast Asia, which produces most of the world's palm oil, growers are bracing for higher output costs with industry players already seeing disruptions in fertilizer procurements and lower imports.

Albertus Wawan, an Indonesian oil palm smallholder who already cut fertilizer use by a third, will delay his next application to January to save on two month's usage.

"Once fertilizer prices increase, it won't go down," Wawan said. "This is the challenge for farmers in the future."

Recent dips in oil prices could provide some relief to fertilizer producers, but any future energy shocks caused by unexpected cold snaps would trigger higher food prices, according to an FAO report in November.

"We need to understand that all policy measures that lift energy prices will lift food prices," said Josef Schmidhuber, deputy director at FAO's trade and markets division. "This must not mean that we de-emphasize climate change mitigation measures, but we need to find ways to increase fertilizer use efficiency ... and critically review our energy policies."