Bombshell: Many uber-rich Americans pay little to no income taxes 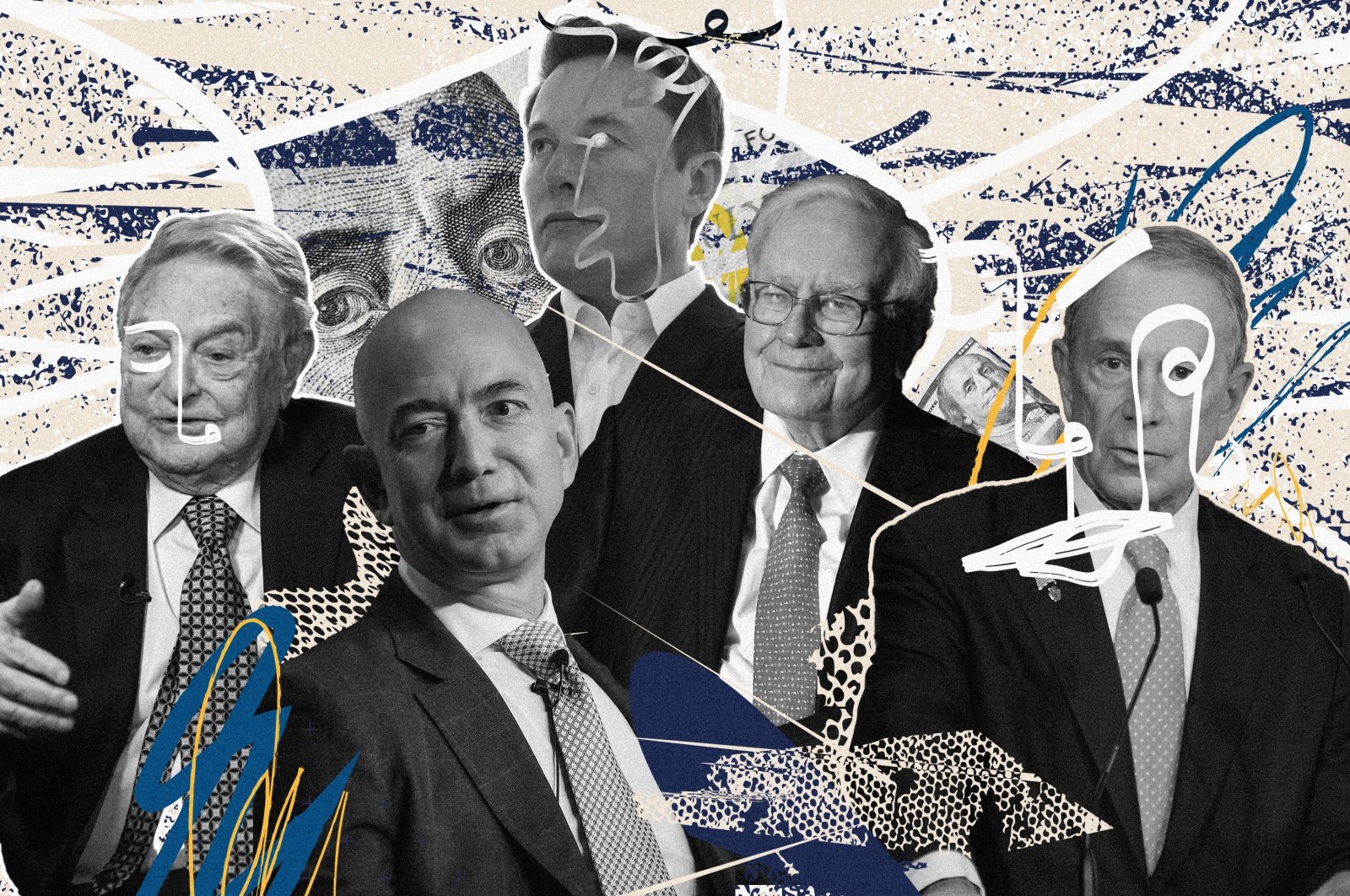 Several of the world’s most prominent billionaires paid next to no income taxes in some years, according to an investigative report released Tuesday.

Overall, the richest 25 Americans pay less in tax – an average of 15.8% of adjusted gross income – than many ordinary workers do, once you include taxes for Social Security and Medicare, ProPublica found. Its findings are likely to heighten a national debate over the vast and widening inequality between the very wealthiest Americans and everyone else.

The IRS, part of the Treasury Department, is the nation's tax-collecting agency and many tax records are considered confidential documents.

Using perfectly legal tax strategies, many of the uber-rich are able to shrink their federal tax bills to nothing or close to it.

A spokesperson for Soros, who has supported higher taxes on the rich, told ProPublica that the billionaire had lost money on his investments from 2016 to 2018 and so did not owe federal income tax for those years. Musk responded to ProPublica's initial request for comment with a punctuation mark – “?'' – and did not answer detailed follow-up questions.

The federal tax code is meant to be progressive – that is, the rich pay a steadily higher tax rate on their income as it rises. And ProPublica found, in fact, that people earning between $2 million and $5 million a year paid an average of 27.5%, the highest of any group of taxpayers.

The wealthy can reduce their tax bills through the use of charitable donations or by avoiding wage income (which can be taxed at up to 37%) and benefiting instead mainly from investment income (usually taxed at 20%).

U.S. President Joe Biden, seeking revenue to finance his spending plans, has proposed higher taxes on the wealthy. Biden wants to raise the top tax rate to 39.6% for people earning $400,000 a year or more in taxable income, estimated to be fewer than 2% of U.S. households. The top tax rate that workers pay on salaries and wages now is 37%.

Biden is proposing to nearly double the tax rate that high-earning Americans pay on profits from stocks and other investments. In addition, under his proposals, inherited capital gains would no longer be tax-free.

The president, whose proposals must be approved by Congress, would also raise taxes on corporations, which would affect wealthy investors who own corporate stocks.

ProPublica reported that the tax bills of the rich are especially low when compared with their soaring wealth – the value of their investment portfolios, real estate and other assets. People don't have to pay tax on an increase in their wealth until they cash in and, say, sell their stock or home and realize the gains.

Using calculations by Forbes magazine, ProPublica noted that the wealth of the 25 richest Americans collectively jumped by $401 billion from 2014 to 2018.

But those people paid a total of just $13.6 billion in federal income taxes for those five years – equal to just 3.4% of the increase in their wealth.

Chuck Marr, a senior director at the left-leaning Center on Budget and Policy Priorities, suggested that Biden’s proposals, which face fierce opposition from Republicans in Congress and from businesses, are “modest" given how much the wealthy have benefited in recent years and how comparatively little tax many of them pay.

“It always seems like the solutions are cast as radical when there’s less focus on the current situation being radical,’’ Marr said.

Democratic Sens. Elizabeth Warren and Bernie Sanders, among others, have proposed taxing the wealth of the richest Americans, not just their income.

On Tuesday, Warren tweeted in response to the ProPublica report:

“Our tax system is rigged for billionaires who don’t make their fortunes through income, like working families do. The evidence is abundantly clear: it is time for a #WealthTax in America to make the ultra-rich finally pay their fair share.″

Gabriel Zucman, an economist at the University of California, Berkeley, who is a leading expert on financial inequality, says there are three ways to ensure that the wealthy pay more: Impose a direct tax on their wealth like the one Warren has proposed; tax the gains in their wealth, whether or not they cash in and realize a gain; or raise taxes on corporate profits.

ProPublica's data “reveals that the country’s wealthiest, who have profited immensely during the pandemic, have not been paying their fair share of taxes,” Sen. Ron Wyden, who leads the tax-writing Senate Finance Committee, said at the start of a hearing Tuesday on the IRS's budget with Commissioner Charles Rettig.

Wyden has proposed legislation that would tighten enforcement of tax collection against wealthy individuals and corporations that use artifices and loopholes to skirt paying taxes. It also would eliminate the ability of high earners to defer paying taxes on capital gains until they are realized, so that wealth would be taxed the same way as wages.

The Treasury Department has asked law enforcement authorities to investigate the disclosure of the tax records, U.S. officials were cited by Reuters as saying on Tuesday.

For his part, Rettig said that the IRS is investigating the leak of the tax data to ProPublica and that any violations of the law would be prosecuted. (ProPublica reported that it doesn't know the identity of the source who provided the data.)

“We will find out about the ProPublica article,” Rettig said. “We have turned it over to the appropriate investigators, both external and internal.”

Treasury Department spokesperson Lily Adams said in an emailed statement that the matter has been referred to the FBI, federal prosecutors and two internal Treasury Department watchdogs, "all of whom have independent authority to investigate."

"We know that there is more to be done to ensure that corporations (and) individuals who are at the highest income are paying more of their fair share," Psaki said.

Now controlling the White House and Congress, Democrats are focusing on the tax gap – the hundreds of billions of dollars’ difference between what Americans owe the government in taxes and what they pay – and its connection to economic inequality. The top 10% of earners have accounted for most of that gap, experts say, by underreporting their liabilities, intentionally or not, as tax avoidance or as outright evasion.

The tax gap is under a spotlight as a potential source for recouping some revenue to help pay for Biden’s proposed spending on infrastructure, families and education. Democrats have been pushing the IRS to invigorate its enforcement of tax collection and make it fairer, by pursuing the big corporations and wealthy individuals who manage to game the system.

At Tuesday’s hearing, Wyden told Rettig that it is wrong “how the wealthy always seem to skip out on their obligations.”

“You have a better chance of being struck by lightning than being audited if you’re a partner in a partnership,” Wyden said.

Rettig responded, “We are outgunned.”

Democrats have argued that the tax gap has widened mainly because big U.S. corporations have parked revenue overseas and wealthy individuals have failed to pay their fair share. They assert that the IRS, long understaffed and underfunded, has tended to pursue taxpayers of modest means more aggressively than high-powered businesspeople and corporations.

The agency’s funding has been slashed about 20% since 2010. Biden’s new spending proposals include an extra $80 billion over 10 years to bolster IRS audits of upper-income individuals and corporations, with an eye toward recovering an estimated $700 billion.

Much of the gap comes from the use of overseas havens. The government loses between an estimated $40 billion and $120 billion a year from offshore tax evasion. Biden’s tax plan includes measures to stop corporations from stashing profits in countries with low tax rates.

Last weekend, the Group of Seven (G-7) wealthy democracies, which includes the United States, agreed to support a global minimum corporate tax of at least 15% to deter multinational companies from avoiding taxes by stashing profits in low-rate countries.