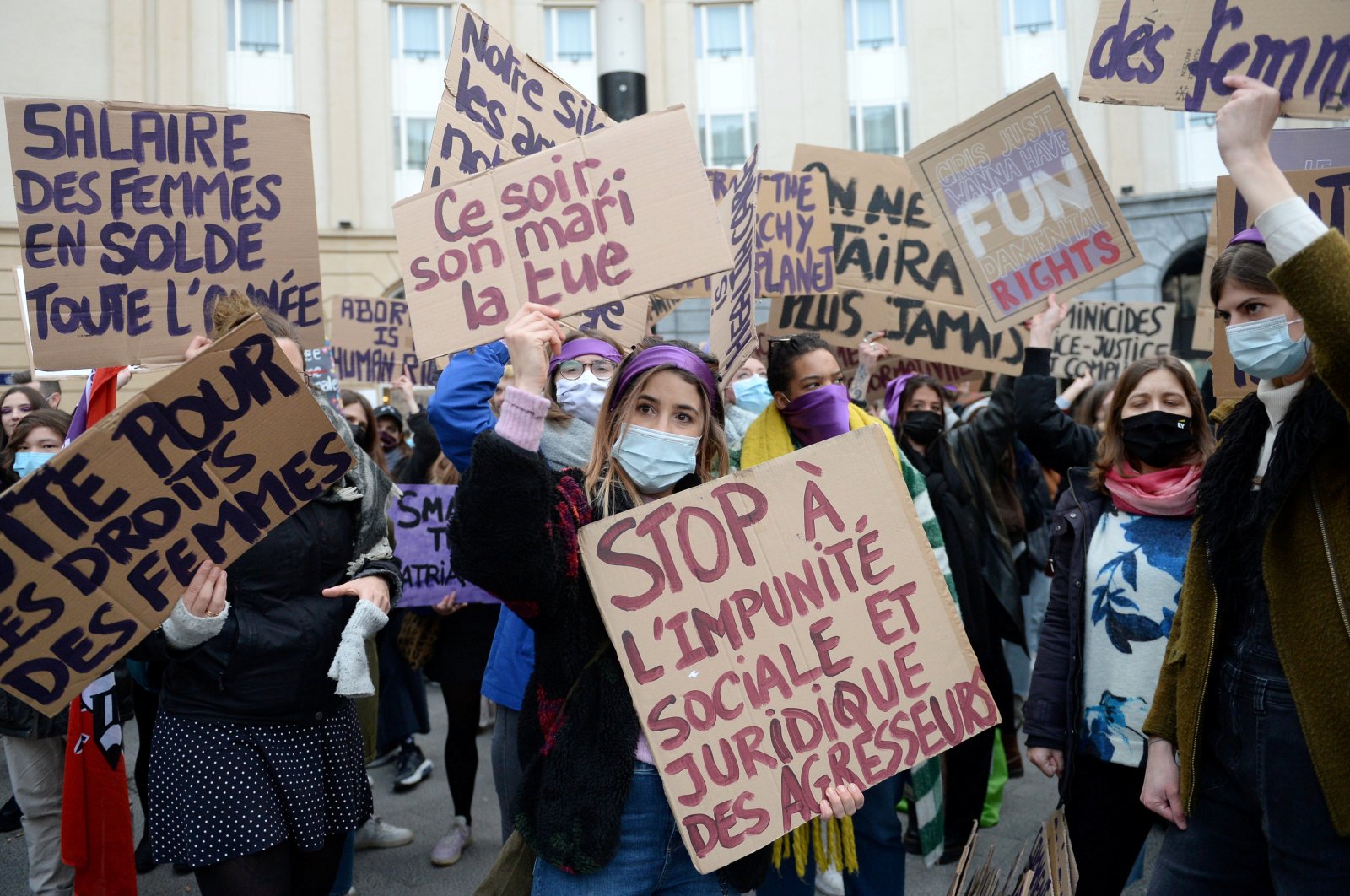 Women hold placards during a demonstration to call for gender equality and demanding an end to violence against women to mark International Women's Day in Brussels, Belgium, March 8, 2021. (Reuters Photo)
by Agencies
Mar 31, 2021 12:54 pm

Women will not reach parity with men until the middle of the next century as the coronavirus pandemic hits them the hardest, according to a World Economic Forum (WEF) report released Wednesday.

The pandemic has rolled back years of progress toward equality between men and women, the Global Gender Gap Report said, showing the crisis had added decades to the trajectory towards closing the gender gap.

“The pandemic has fundamentally impacted gender equality in both the workplace and the home, rolling back years of progress,” said WEF Managing Director Saadia Zahidi.

A range of studies has shown that the outbreak has had a disproportionate impact on women, who have lost jobs at a higher rate than men, and had to take on much more of the extra childcare burden when schools closed.

The effects will be felt in the long-term, according to the WEF, which found that the goalposts for gender parity appeared to be moving further away.

The organization, which usually gathers the global elite in the plush Swiss ski resort of Davos each year, had found in its previous report, published in December 2019 right before the pandemic hit, that gender parity across a range of areas would be reached within 99.5 years.

But this year’s report shows the world is not on track to close the gender gap for another 135.6 years.

“Another generation of women will have to wait for gender parity,” the WEF said.

On the plus side, women appear to be gradually closing the gender gap in areas such as health and education.

But inequality in the workplace – which has long appeared to be the stickiest area to fix – is still not expected to be erased for another 267.6 years.

And the pandemic has not helped.

The WEF pointed to a study by the U.N.’s International Labour Organization (ILO) showing that women were more likely to lose their jobs in the crisis, in part, because they are disproportionately represented in sectors directly disrupted by lockdowns.

Other surveys have shown that women were carrying a greater share of the burden of increased housework and childcare during lockdowns, contributing to higher stress and lower productivity levels.

Women were also being hired back at a slower rate than men as workplaces opened up again, according to LinkedIn data referenced in the report.

“If we want a dynamic future economy, it is vital for women to be represented in the jobs of tomorrow,” Zahidi said, stressing that “this is the moment to embed gender parity by design into the recovery.”

It was in the political sphere that the march towards gender parity did the biggest about-face, with several large-population countries seeing the political gender gap widen, the WEF study found.

Women still hold just over a quarter of parliamentary seats worldwide, and only 22.6% of ministerial positions.

On its current trajectory, the political gender gap is not expected to close completely for another 145.5 years, the report found. That marks a 50% hike from the estimated 95 years in the 2020 report, WEF pointed out.

Progress across the categories varies greatly in different countries and regions.

The report pointed out that while Western European countries could close their overall gender gap in 52.1 years, countries in the Middle East and North Africa will take nearly 142.4 years to do so.

Overall, the Nordic countries once again dominated the top of the table – the gap between men and women was narrowest in Iceland, for the 12th year running, followed by Finland and Norway.