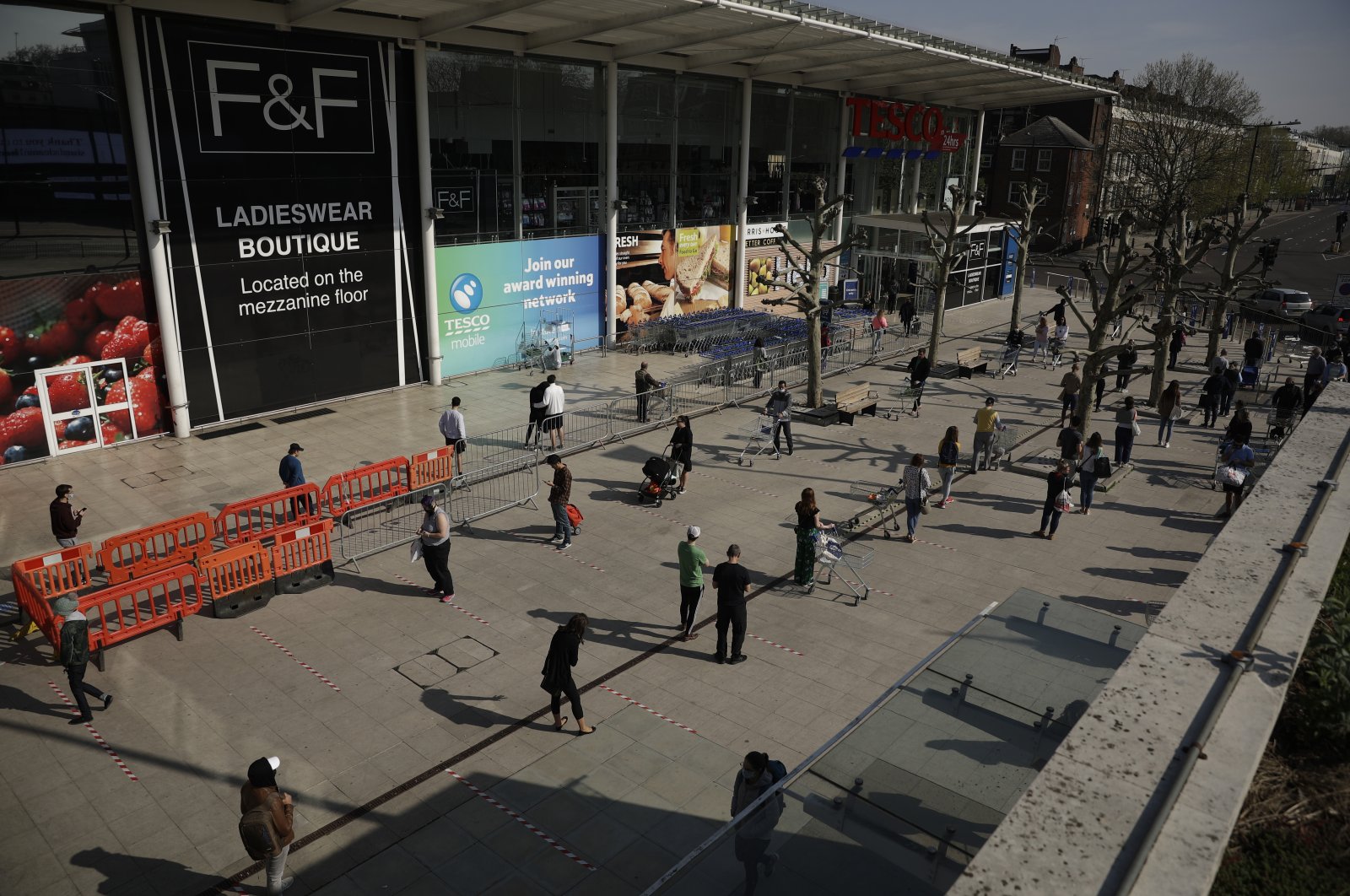 People observe social distancing in an attempt to stop the spread of the coronavirus by standing behind tape lines as they line up to shop outside a branch of the Tesco supermarket chain in west London, U.K., April 10, 2020. (AP Photo)
by Agencies Apr 14, 2021 10:59 am
RECOMMENDED

The United Kingdom’s biggest retailer, Tesco, recorded "exceptionally strong" sales but reported a 20% drop in full-year pretax profit as the cost of adapting the business to the government's pandemic measures wiped out sales revenue.

With restaurants and cafes shut for large parts of 2020, the supermarkets in Britain saw a surge in demand as shoppers stocked up on goods to eat at home during lockdowns.

The retailer announced a sixfold surge in annual net profits after the supermarket giant exited Asian markets and was allowed to stay open during coronavirus lockdowns.

However, profit before tax came in at 825 million pounds, down 19.7% on the year before. At an operating profit retail level, it did however come in above forecasts.

"While the pandemic is not yet over, we're well-placed to build on the momentum in our business. We have doubled the size of our online business and through (the loyalty) Clubcard, we're building a digital customer platform."

The retailer said that while some of the additional sales volumes would fall away as COVID-19 restrictions ease, it expected a strong recovery in profitability and retail free cash flow as the majority of the pandemic costs would not be repeated.

While uncertainty around a recovery makes it difficult to predict the year ahead, Tesco said its best estimate is that retail operating profit will recover to a similar level as in the 2019-2020 financial year, the year before the pandemic.

It proposed a full-year dividend in line with last year.

"In terms of the outlook Tesco said it expects sales volumes to decline as lockdown restrictions ease, however, costs are also expected to decline as well," noted Michael Hewson, chief market analyst at CMC Markets U.K.

"This should translate into better margins, and an increase in profits (excluding exceptional), which should head back to the levels seen last year."

In early trading following the update, Tesco shares were down almost 4% to 223 pence on London's FTSE 100 index, which was flat overall.

As the pandemic began to take hold in March 2020, Tesco struck a deal to sell its businesses in Thailand and Malaysia to Thai conglomerate CP Group for 8 billion pounds, which massively skewed its annual performance.

The transactions, agreed under previous CEO Dave Lewis, were aimed at slashing debt and streamlining the group, enabling a stronger focus on U.K., Irish and central European activities.

Tesco's three major U.K. rivals – Sainsbury's, Asda and Morrisons – have all enjoyed strong sales over the last year, with coronavirus restrictions forcing many people to work from home.

However, they have also had to endure the costs of additional workers, staff sick pay and in-store measures to deal with the pandemic, which has dented profits.