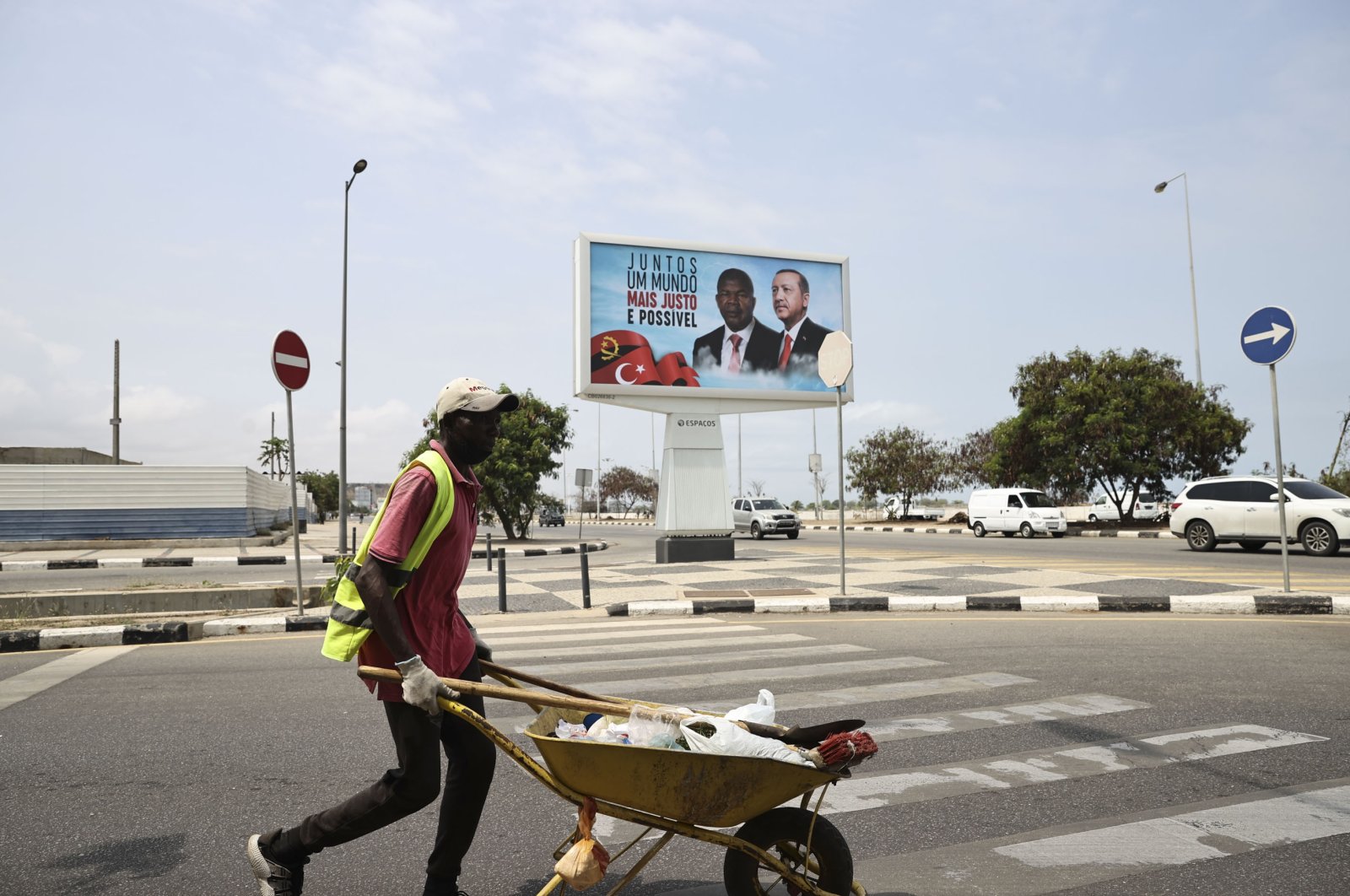 A worker passes by the poster of President Recep Tayyip Erdoğan and President of Angola Joao Lourenco that reads "Together a Fairer World is Possible" in the capital Luanda, Angola, Oct. 19, 2021. (AA Photo)
by Daily Sabah with AFP Oct 29, 2021 1:48 pm
RECOMMENDED

President Recep Tayyip Erdoğan enters this weekend’s G-20 summit in Rome fresh off an African tour aimed at expanding ever-growing relations with the continent and cementing lucrative partnerships during tensions with the West.

From mining to health, energy to infrastructure, Turkish businesses are popping up across the resource-rich continent and signing deals hailed as a win-win.

Both sides have been vowing to tap into their greater potential when it comes to further expanding and deepening relations.

This pivot away from traditional European markets has already seen Turkey’s trade with Africa balloon from $5.4 billion when Erdoğan came to power in 2003 to $25.4 billion last year.

Back from a visit to Angola, Togo and Nigeria – and in the middle of a diplomatic dispute with the West – Erdoğan told an African business forum last week that Turkey wanted to see trade triple in the coming years.

One of the most strategic areas of this cooperation is defense, where Turkey has been exhibiting the game-changing successes of its military drones on the battlefields.

Erdoğan once described Turkey as an “Afro-Eurasian” nation and has visited the most African countries – 30 out of 54 – of any non-African head of state.

The number of Turkish embassies in Africa has grown from 12 to 43 since 2002 while the national flag carrier, Turkish Airlines (THY), flies to over 60 African destinations.

“The main reason for our increased interest in Africa is that we saw the potential there,” Foreign Economic Relations Board (DEIK) Chairperson Nail Olpak told Agence France-Presse (AFP).

“Maybe we saw it a little late, but we did,” he added.

Turkish firms have already built a mosque in Ghana, an indoor stadium in Rwanda, an Olympic swimming pool in Senegal, and are working on an airport in Sudan.

Algeria, meanwhile, is one of Turkey’s main suppliers of liquefied petroleum gas, offering Ankara a chance to “reduce our dependence on Russia and Iran,” said Bayram.

For African officials, Turkish companies offer jobs and reasonably priced goods the quality of which often compares favorably to those from China – one of the continent’s most aggressive investors.

“We see Turkey as a serious friend who wants to invest in Africa,” Tanzania Industry and Trade Minister Kitila Mkumbo told the Africa business forum in Istanbul, attended by more than 40 African and Turkish ministers.

Uganda Investment Authority Board Chairperson Morrison Rwakakamba was among those drumming up trade, expressing hope for Turkish interest in agriculture and agro-processing in his east African country.

“With Turkey, the relationship is very much based on mutuality and win-win, and that is a very good starting point,” Rwakakamba told AFP.

The bid to expand African trade comes amid a depreciation in the Turkish lira, which makes exports even more competitive.

“It is like a soaring arrow,” said Muzaffer Suat Utku, executive vice president in charge of international banking at Turkey’s Aktif Bank, which brands itself as the “bank of African foreign trade.”

“Our exporters and investors are constantly having meetings in Africa. I believe relations will reach a much more substantial level,” Utku said.

Some analysts believe Ankara has developed more goodwill in Africa than has Beijing, whose projects have been known to put developing countries into heavy debt.

“If we compare Turkey with China, we can see that on the ground there are different outcomes for the local people,” said Federico Donelli, international relations researcher at the University of Genoa.

“There is more involvement of local peoples and in some cases, there is also an exchange of know-how between Turkey and the local population,” Donelli told AFP.

In Africa, experts say, Turkey is following a considered approach.

“There is a long-term plan, it’s not a short-term plan,” Bayram said, pointing to investments in health care, education, training and the role of women.

Turkey has been vowing that its perspective on relations with the countries of Africa was not only business-oriented but also human-oriented.

In addition to diplomatic missions, Turkey has pursued its relations with the continent via agreements on a variety of fields and the activities of such institutions as the Turkish Cooperation and Coordination Agency (TIKA), the Yunus Emre Institute, and the Turkish Maarif Foundation.

The Maarif Foundation is active across Africa, with dozens of schools and dormitories.

Turkey also supports the needs of African students in higher education with its Presidency for Turks Abroad and Related Communities (YTB) has given assistance to a total of 5,259 students across all countries in Africa between 2010 and 2019.

TIKA and the Yunus Emre Institute both work to serve Africans via their projects in the fields of development and education.

TIKA, Turkey’s state-run aid agency, has 22 representative offices in Africa through which it conducts its activities. It has extended humanitarian and development assistance across the continent and delivered aid, particularly during the coronavirus pandemic.

Through its projects, it has supported female entrepreneurs and farmers and has undertaken the construction and renovation of many structures and institutions.

The Yunus Emre Institute operates through its cultural centers in 10 African countries.

The institute has offices in Algeria, Morocco and Tunisia in North Africa; Somalia, Sudan and Rwanda in East Africa; and Senegal, Mauritania and Gambia in West Africa. With its headquarters in the Nigerian capital of Abuja, it works to promote the Turkish language.

It is also active in culture and the arts, promoting cooperation with Africans in a variety of fields.