EU expects 'recession of historic proportions' in 2020 over pandemic 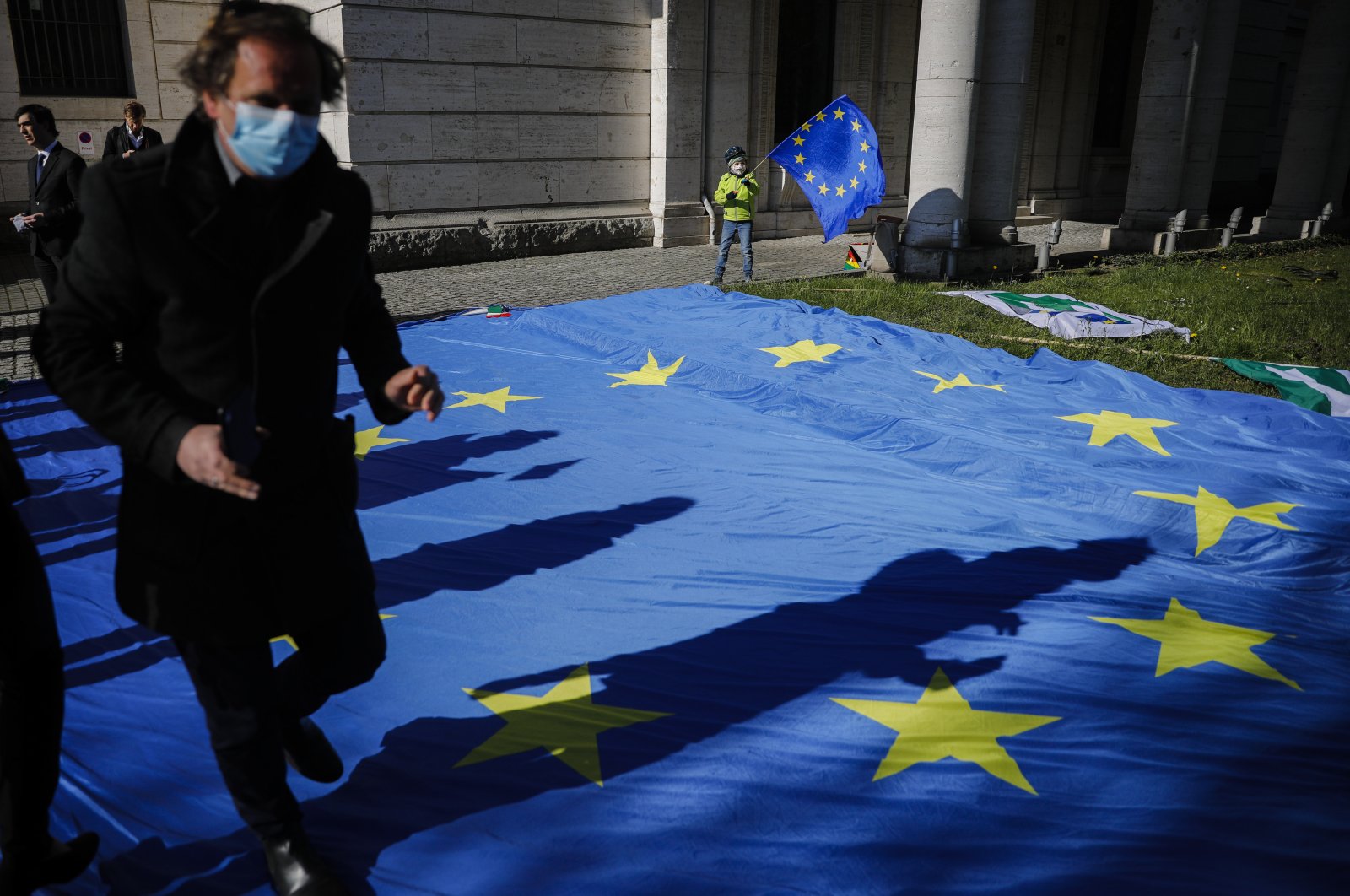 A man with a face mask and a child with a European flag attend an event of the Pulse of Europe movement to collect signatures for more support for Italy during the coronavirus outbreak in front of the Italian embassy in Berlin, Germany, April 22, 2020. (AP Photo)
by Compiled from Wire Services May 06, 2020 12:18 pm

The European Union in its official forecast report says the bloc expects a 7.5% contraction this year due to the coronavirus outbreak that brought the world economies to the knees

The European Union predicted Wednesday “a recession of historic proportions this year” due to the impact of the coronavirus with a drop in output of more than 7%, as it released its first official forecast of the damage the pandemic is inflicting on the bloc’s economy.

The 27-nation EU economy is predicted to contract by 7.5% this year, before growing by about 6% in 2021. The group of 19 nations using the euro as their currency will see a record decline of 7.75% this year, and grow by 6.25% in 2021, the European Commission said in its Spring economic forecast.

“Europe is experiencing an economic shock without precedent since the Great Depression,” EU Economy Commissioner Paolo Gentiloni said in a statement.

More than 1.1 million people have contracted the virus across Europe and over 137,000 have died, according to the European Centre for Disease Prevention and Control. Unclear outbreak data, low testing rates and the strain on health care systems mean the true scale of the pandemic is much greater.

With the spread slowing in most European countries, people are cautiously venturing out from confinement and gradually returning to work, but strict health measures remain in place amid concern of a second wave of outbreaks and any return to something like normal life is at least months away.

The pandemic has hurt consumer spending, industrial output, investment, trade, capital flows and supply chains. It has also hit jobs. The unemployment rate across the 27-nation EU is forecast to rise from 6.7% in 2019 to 9% in 2020 but then fall to around 8% in 2021, the commission said.

While the virus hit every member country, the extent of the damage it ultimately inflicts will depend on the evolution of the disease in each of them, the resilience of their economies and what policies they put in place to respond.

Gentiloni said that the depth of the recession and the strength of recovery will be uneven across the world’s biggest trading bloc.

Much will depend, he said, on “the speed at which lockdowns can be lifted, the importance of services like tourism in each economy and by each country’s financial resources. Such divergence poses a threat to the single market and the euro area - yet it can be mitigated through decisive, joint European action.”

How quickly things can change. On Feb. 13, the commission had predicted “a path of steady, moderate growth” this year and next of 1.2%. At that time, uncertainty over U.S. trade policy and a Brexit trade deal plus tensions in Latin America and the Middle East were the main threats.

The coronavirus outbreak in China was noted at the time as “a new downside risk” but the commission’s assumption less than three months ago was “that the outbreak peaks in the first quarter, with relatively limited global spillovers.”

Eurostat noted the figure slipped 10.4% in the EU27 in March, compared to a month earlier.

In February, the retail trade volume was up 0.6% and 0.5% in the euro area and EU, respectively.

The volume of retail trade for non-food products narrowed the most, by 23.1%, followed by automotive fuels with 20.8%. But retail trade volume for food, drinks and tobacco rose 5% on a monthly basis in March.

Official data revealed that the retail trade volume in the EU27 dropped 21.3% for non-food products and 19.3% for automotive fuels, while food, drinks and tobacco increased 4.7%.

"Among member states for which data are available, the largest drops in the total retail trade volume were registered in Bulgaria (minus 18.1%), France (minus 17.4%) and Luxembourg (minus 16.4%)," Eurostat said.

The coronavirus's adverse impact was also reflected in the annual figures of both the eurozone and EU.

The calendar adjusted retail sales index dropped 9.2% in the euro area and 8.2% in the EU last month, compared to March 2019.