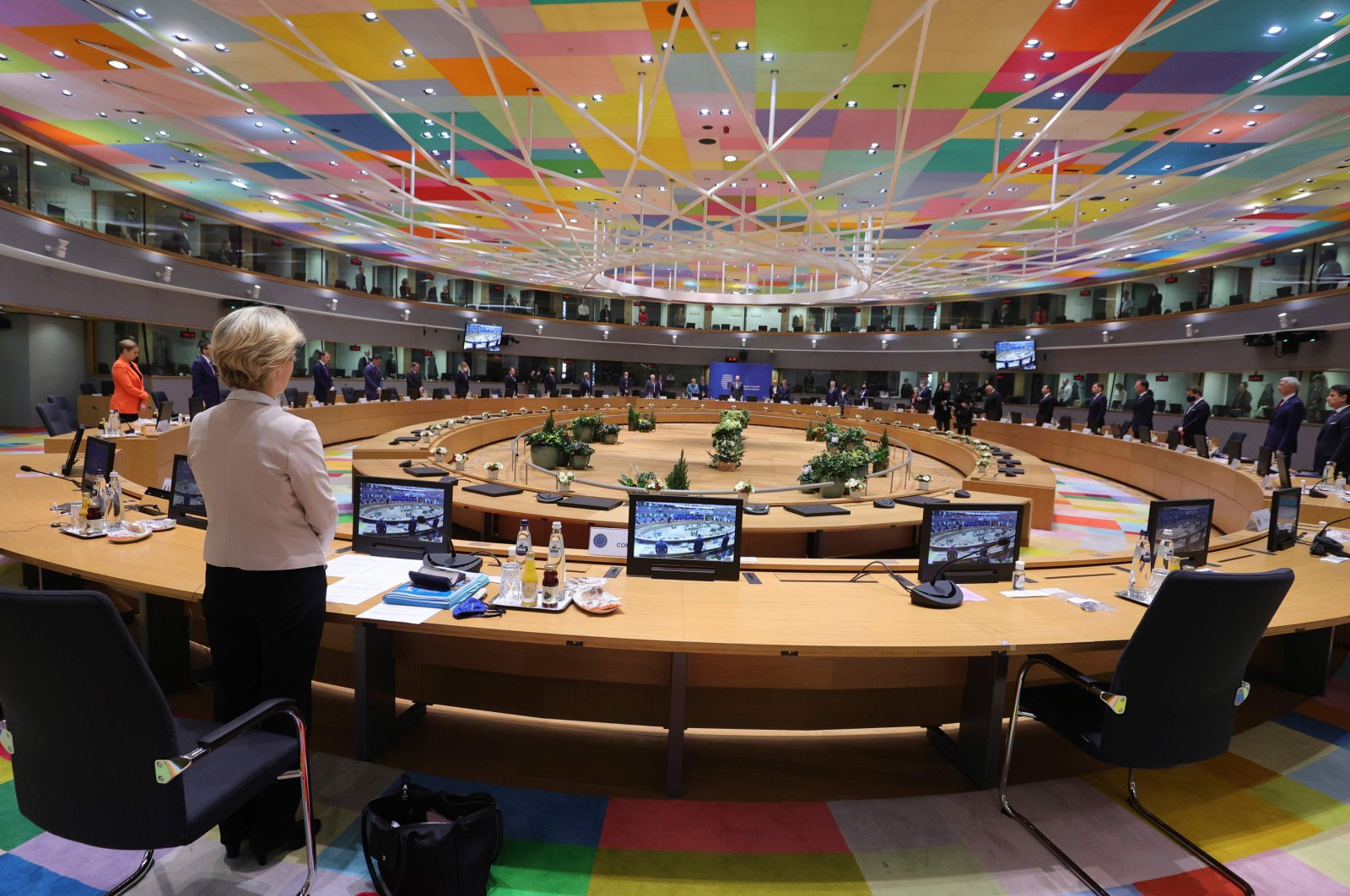 President of the European Commission Ursula von der Leyen (1st from left) and EU leaders observe a minute silent in tribute to late French President Valery Giscard d'Estaing prior to a round table meeting during an EU summit at the European Council building in Brussels, Belgium, Dec. 10, 2020. (AFP Photo)
by ASSOCIATED PRESS Dec 10, 2020 9:12 pm
RECOMMENDED

European Union leaders have sealed an agreement on a massive long-term budget and coronavirus recovery package, EU Council President Charles Michel said Thursday, after they overcame objections from Hungary and Poland about a move to tie use of the bloc's funds to upholding of the rule of law.

The 1.82 trillion-euro ($2.21 trillion) seven-year budget and recovery package is considered vital for many European countries whose economies have been devastated by the virus. Poland and Hungary had agreed to the deal in July but later vetoed it, fearing the new mechanism could target them for breaches of Europe's democratic standards.

“Now we can start with the implementation and build back our economies. Our landmark recovery package will drive forward our green and digital transitions,” Michel said in a tweet during an EU summit he was chairing in Brussels.

No details of the agreement were immediately available.

The breakthrough came just days after it appeared that Poland and Hungary’s 25 EU partners might go it alone and create a new coronavirus recovery package without them.

Ahead of the two-day summit, EU diplomats and officials said the solution would take the form of a declaration clarifying that the rule of law mechanism would not be used against any country without a ruling from the EU’s top court, the European Court of Justice, first. That process could take a year.

Polish Prime Minister Mateusz Morawiecki had warned that it could be a case of us now, you tomorrow.

“We have to avoid any arbitrary and politically motivated decisions,” he said. “Today, we fear that we might be attacked in (an) unjustified way, but of course in the future (it can be) any country.”

Hungarian Prime Minister Viktor Orban said that all sides were fighting for ”a victory for common sense.”

“It is obvious that when our nations and so many millions of people are in real need because of (the) pandemic and the economic consequences of that, we have to behave reasonably,” said Orban, whose nationalist government, like Poland's, has been accused of undermining judicial independence and media freedoms.

But Dutch Prime Minister Mark Rutte said he still had questions about the compromise, like his neighbors in Belgium and Luxembourg. He had planned to seek legal advice, particularly as to whether the compromise would violate the agreement previously reached between EU member countries and the European Parliament.

Rutte said he also wanted to be sure that any court ruling “can retroactively establish that violations have occurred.”

Luxembourg's prime minister, Xavier Bettel, said it's normal for Hungary and Poland to want to have judicial review.

“But nothing must change in the rules. Nothing. If we start diluting, or to say that we don’t care about values or justice; no. If we want rule of law we must have a mechanism that works," Bettel said.

Daniel Freund, the Green group negotiator on the rule of law in the European Parliament, warned that the compromise being discussed would put the system “on hold for 1-2 years.”

“Europe’s rule of law is in crisis," he said, adding that EU members should not be pressing the European Commission to avoid enforcing “existing laws while judicial independence is abolished in Poland or billions of EU funds end up with Orban’s family and friends.”

Had the leaders failed to adopt the budget for 2021-2027 before the end of the year, the bloc would have been forced to function on limited resources, with a maximum of one-twelfth of the budget for the previous financial year to be spent each month.

Many projects for Poland and Hungary — which are already being formally investigated by the EU for their potential violations of the rule of law — would have been held up.