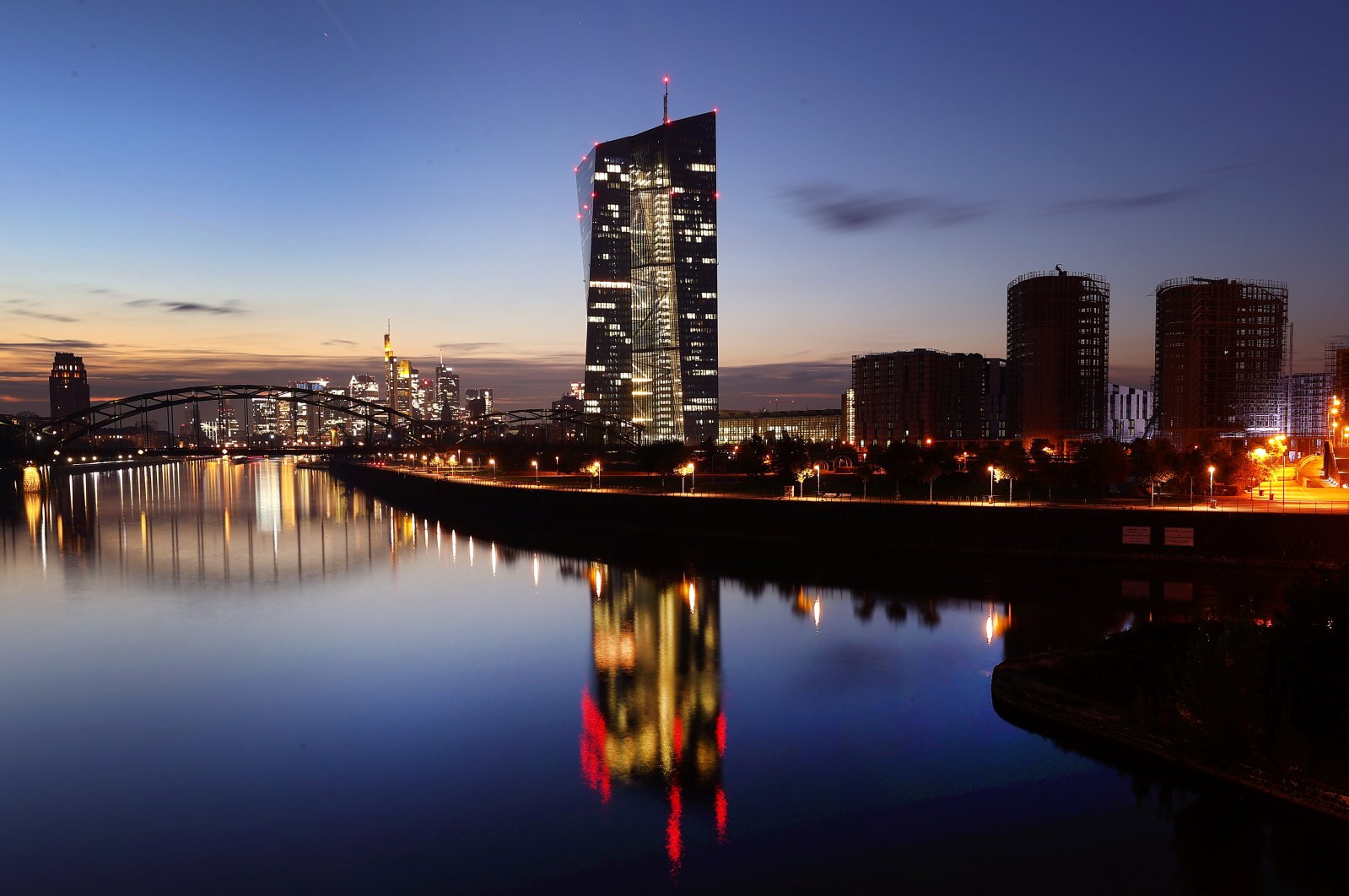 The headquarter of the European Central Bank (ECB) is seen during sunset ahead of the ECB's governing council meeting, Frankfurt, Germany, Oct. 25, 2021. (Reuters Photo)
by REUTERS Oct 29, 2021 5:54 pm
RECOMMENDED

The eurozone economy continued to boom over the summer as activity rebounded after coronavirus lockdowns but inflation is also blowing past expectations, leaving the European Central Bank (ECB) with a growing policy headache.

Growth has soared as consumers return to stores and venues but many businesses have been unable to keep up with demand, putting further pressure on prices already being driven higher by the rising cost of commodities.

The economy of the 19 countries sharing the euro expanded by a quicker-than-forecast 2.2% in the third quarter, its fastest pace in a year and putting it on course to reach its pre-crisis size before the end of the year.

This strong performance came even while Germany, the bloc's biggest economy, struggled as a chip shortage held back production in its vast car manufacturing sector.

But France, Italy, Belgium and Austria, some of them economic laggards historically, outperformed to lift the bloc.

The quick growth along with soaring oil prices, helped push inflation to 4.1% this month, more than twice the ECB's target and equalling the all-time-high for the data series launched in 1997.

While inflation was mostly driven by higher energy prices and tax hikes, growing price pressures from supply bottlenecks were also visible in rising prices for services and industrial goods – a worry for the ECB, which is slowly accepting that price growth may be more durable than once thought.

But growth and inflation may be nearing turning points.

The economy is hitting speed bumps as supply shortages, a scarcity of labor and the resurgence of coronavirus infections thwarts output. And inflation is likely to slow as peak-pandemic lows and the impact of tax hikes are knocked out of the figures.

"Growth will be much slower in the final quarter as supply chain disruption, slowing global demand and some labor shortages hamper production," Andrew Kenningham at Capital Economics said.

Economists see no drama ahead. A key ECB survey released on Friday showed expected growth of 4.5% in 2022, suggesting that rapid expansion will continue, but at a more moderate pace.

Inflation is also likely to ease, although there is growing uncertainty over how fast and how far.

Indicators suggest the decline will be slower than the central bank once thought, raising the risk that high prices, even if temporary, could become entrenched in wages and corporate pricing structures.

ECB President Christine Lagarde acknowledged on Thursday that supply disruptions would persist, but said inflation will fade back below the 2% target over the medium term, so that no policy response is required for now.

Markets increasingly doubt her. They are now pricing in a 10 basis point rate hike by July 2022 and another by next October.

A week ago, markets were pricing in just one hike within 12 months and the change in expectations came even as Lagarde tried to push back those bets.

"Headline inflation will likely recede from its current rate of 4.1% to close to 1.5% again in late 2022 as special factors fade," Berenberg economist Holger Schmieding said.

Other central banks around the world are already tightening policy or plan to do so soon by removing extraordinary stimulus put in place to combat the pandemic.

Adding to inflation concerns, an ECB survey of companies released on Friday showed over 30% of respondents expected supply constraints and higher input costs to last for another year or longer. A slightly lower percentage predicted difficulties would last another six to 12 months.

Firms also reported "a scarcity of applicants" for jobs as people changed profession, country or lifestyle, which was likely to result in wage increases.