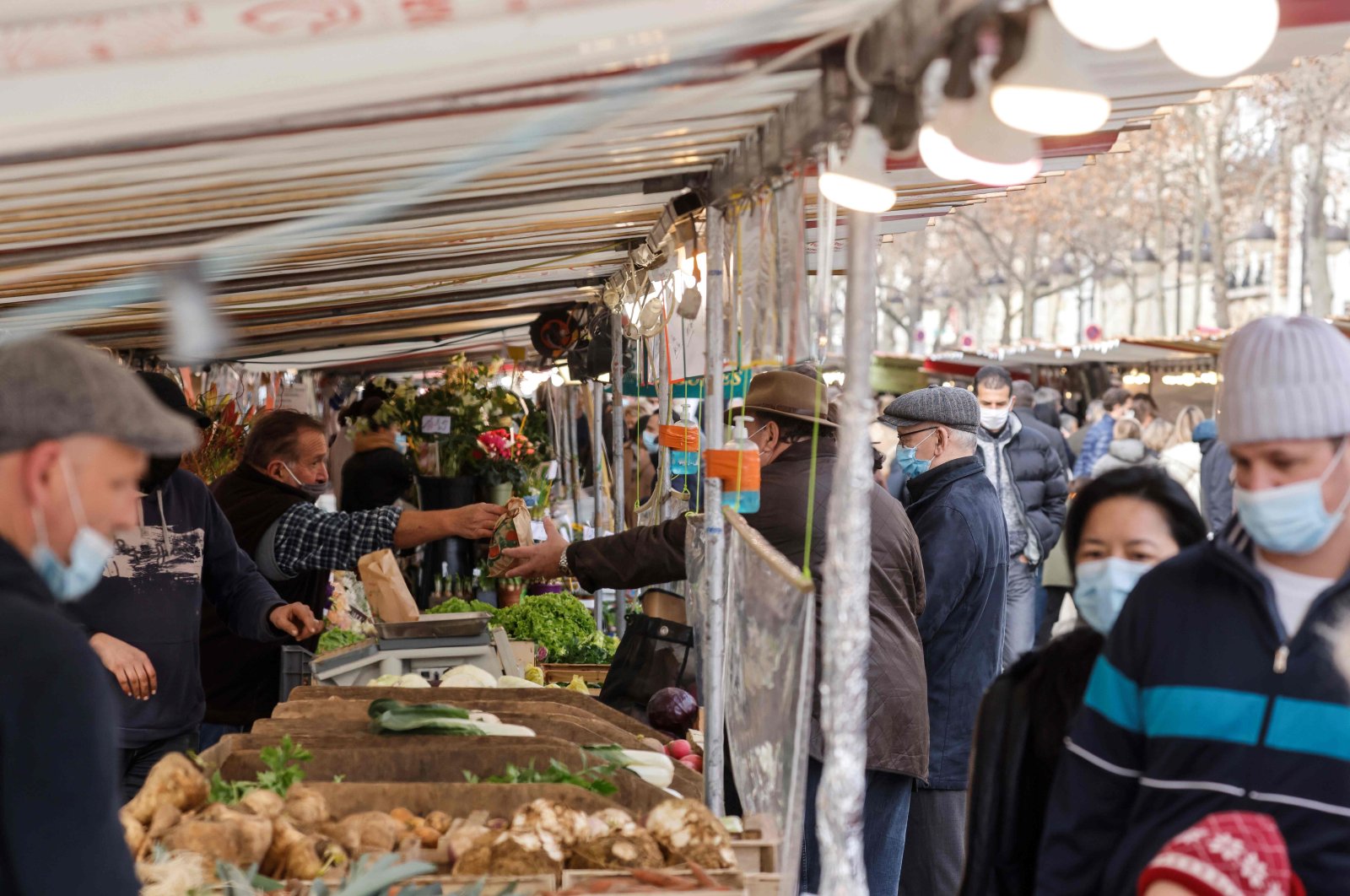 A market stand is protected by see-through plastic sheets to keep a distance between the seller and buyer, as people wearing protective face masks visit the weekly market to shop for vegetables, fruits and dairy products in Paris, France, Jan. 30, 2021. (AFP Photo)
by REUTERS Feb 04, 2021 2:50 pm
RECOMMENDED

Global food prices rose for an eighth consecutive month in January to their highest since July 2014, the United Nations food agency said on Thursday, as economies continue to battle fallout from the COVID-19 pandemic.

The Food and Agriculture Organization’s (FAO) food price index, which measures monthly changes for a basket of cereals, oilseeds, dairy products, meat and sugar, averaged 113.3 points last month versus an upwardly revised 108.6 in December. The December figure was previously given as 107.5. Jumps in cereals, sugar and vegetable oils led the rise, the agency said.

Some governments are taking action to tackle surging domestic food prices, although such moves drive global values higher by reducing supplies for international markets. The consequence is already evident in grain prices, such as corn, hitting multi-year highs.

Grain-consuming giant China is stockpiling supplies, while Argentina has suspended sales of maize for export until Feb. 28. Russia is imposing taxes on exports of wheat, barley and maize.

Food prices have hit citizens particularly hard and rose another 2.5% in a month and more than 18% in a year.

The Rome-based FAO said in a statement that worldwide cereal harvests remained on course for an annual record in 2020, but warned of a sharp fall in stocks and signaled unexpectedly large import demands from China.

FAO’s cereal price index climbed 7.1% month-on-month in January, led higher by international maize prices. They soared 11.2%, some 42.3% above their level a year ago, buoyed in part by purchases by China and lower-than-expected U.S. production.

Sugar jumped 8.1%, with worries about worsening crop prospects in the European Union, Russia and Thailand, and dry weather in South America, pushing up import demand.

The vegetable oil price index increased 5.8% to its highest level since May 2012, driven in part by lower-than-expected palm oil production in Indonesia and Malaysia. Soyoil prices were fuelled by reduced export opportunities and prolonged strikes in Argentina.

The meat index posted a 1.0% gain, led by brisk imports of poultry, especially from Brazil, amid avian influenza outbreaks that have hampered exports from several European countries.

FAO revised up its forecast for the 2020 cereal season to 2.744 billion tonnes from a previous estimate of 2.742 billion tonnes made in December, with both wheat and rice yields seen rising. It trimmed forecast for coarse grains production due to reduced prospects for the United States and Ukraine.

The U.N. agency said China was importing unexpectedly large quantities of maize this season, which was having a significant knock-on impact on estimates for world utilization and stocks.

It said the contraction stemmed largely from “a massive downward adjustment” to maize inventories in China.

The FAO forecast for world cereal trade in 2020/21 was raised by 10.6 million tonnes to 465.2 million tonnes – a projected 5.7% rise on the previous season’s record high. Trade in all major cereals was expected to climb, the agency said.