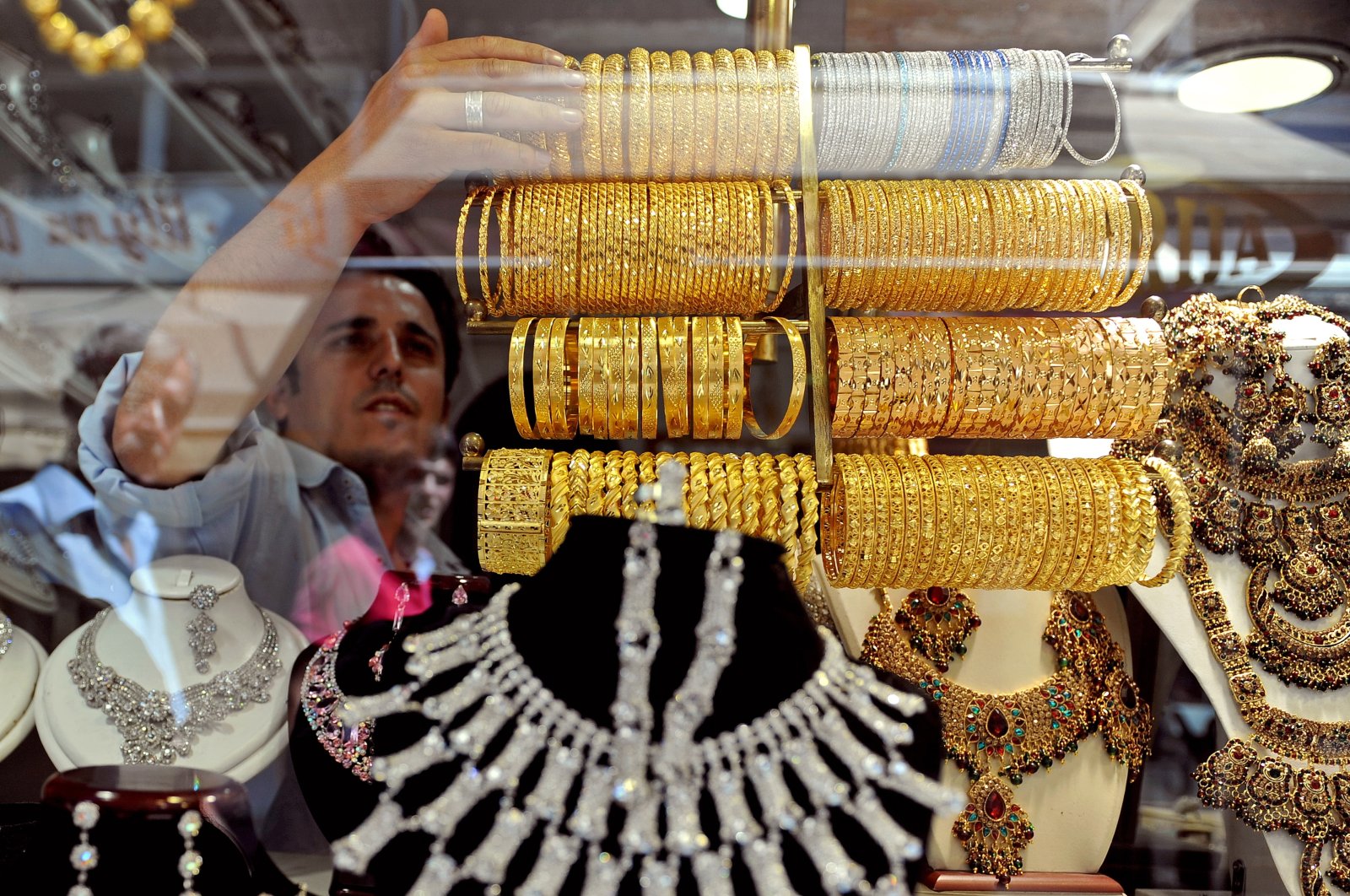 A jewelry worker sets up his shop showcase in one of the many gold jewelry shops in the old Turkish bazaar in Skopje, North Macedonia, Aug. 19, 2011. (EPA Photo)
by French Press Agency - AFP Jul 27, 2020 11:58 am
RECOMMENDED

Gold hit a record high Monday as investors rushed to the safe-haven following concerns about China-U.S. tensions, a spike in virus infections around the world and a lack of progress on a new stimulus bill in Washington.

After months of healthy rallies across equity markets – fuelled by trillions of dollars in government and central bank support – traders are beginning to step back as they weigh the long-term economic impact of the coronavirus.

With vast monetary easing measures put in place by the U.S. Federal Reserve (Fed) pushing the dollar lower against most other currencies, gold is flying, with the spot price hitting an all-time high of $1,944.71, well above its previous record of $1,921.18 seen in 2011. It later pulled back slightly.

Eyes are on the Fed's next policy meeting this week, with some predicting further measures to boost the economy – possibly negative interest rates – that could put more pressure on the dollar and send bullion above $2,000.

There are also concerns that a worse-than-forecast reading on second-quarter U.S. gross domestic product could spark another dollar sell-off.

While the weak dollar has been a key catalyst for the metal's advance, gold has also been boosted by its attractiveness as a haven in times of turmoil, with China-U.S. relations souring by the day.

"Strong gains are inevitable as we enter a period much like the post-global financial crisis environment, where gold prices soared to record levels as a result of copious amounts of Fed money being pumped into the financial system," said Gavin Wendt, senior resource analyst at MineLife.

The greenback was down against most other currencies, with the euro at its highest since September 2018, while higher-yielding units such as the South Korean won and Indonesian rupiah were also up.

Stock markets were mixed as investors fret over the impact of the virus on the economy.

Hong Kong, Tokyo, Singapore, Mumbai and Wellington were all in the red, while Shanghai, Sydney, Seoul and Jakarta were higher.

The tech-rich Taipei market ended at a record high thanks to a 10% surge in heavyweight Taiwan Semiconductor Manufacturing Company, which has been riding a rally in the sector thanks to people working from home during the virus.

London and Paris fell in the morning, but Frankfurt edged up.

Investors are growing concerned about the slow progress on a new U.S. stimulus program, with Republicans still to present proposals worth around $1 trillion, which is less than a third of the plan set out by Democrats.

There are concerns an agreement could take some time, hitting millions of Americans whose much-needed extra unemployment benefits are about to come to an end.

Hong Kong has become an increasingly attractive place for Chinese tech companies to list, especially as they face greater scrutiny and restrictions in the U.S.