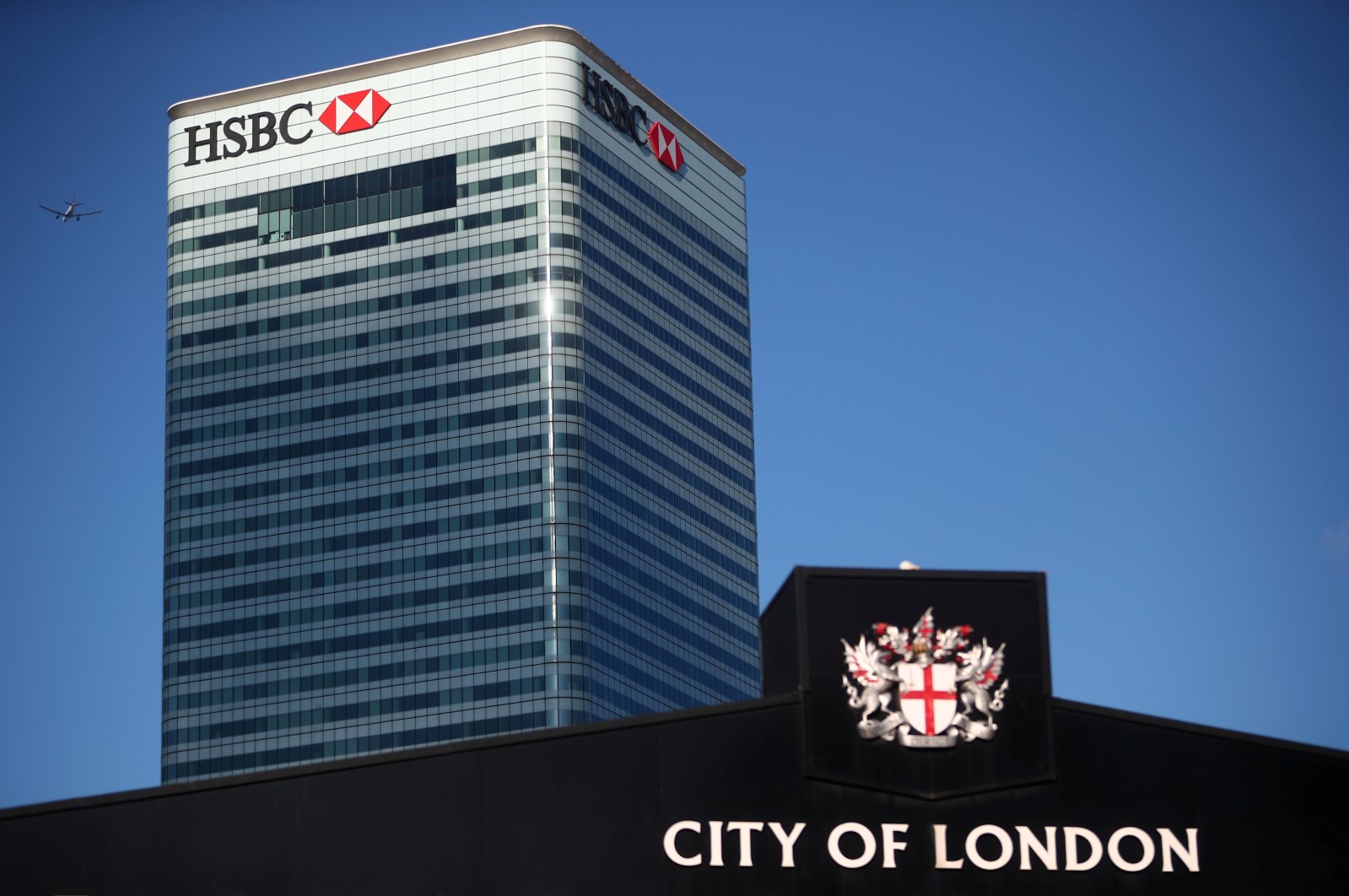 HSBC's building in Canary Wharf is seen behind a City of London sign outside Billingsgate Market in London, Britain, Aug. 8, 2018. (Reuters Photo)
by French Press Agency - AFP Apr 28, 2020 11:22 am
RECOMMENDED

HSBC on Tuesday said first quarter pre-tax profits almost halved as the banking giant was battered by the global coronavirus pandemic while it embarked on a major restructuring.

The lender reported pre-tax profits of $3.2 billion, down 48% from the same period in 2019, citing credit losses from clients struck by the economic slowdown as a major cause.

"The economic impact of the COVID-19 pandemic on our customers has been the main driver of the change in our financial performance since the turn of the year," newly confirmed CEO Noel Quinn said in a statement.

The Asia-focused lender has embarked on a huge cost-cutting initiative as it battles multiple uncertainties caused by the grinding U.S.-China trade war, Britain's departure from the European Union and now the pandemic.

Earlier this year it announced plans to slash 35,000 jobs, trimming fat from less profitable divisions, primarily in the United States and Europe.

But COVID-19 has thrown a spanner into the works with HSBC on Tuesday confirming many of the redundancies would be put on hold for now "to reduce the uncertainty" many of its employees would face in a decimated jobs sector.

Banks are being hammered by market volatility and the economic slowdown caused by the virus crisis.

But they are also on the receiving end of huge bailouts and support from central banks and regulators.

Quinn took over as acting CEO after the shocking ousting of John Flint in August. He was finally confirmed as the bank's head last month.

He is tasked with transforming the sprawling international bank, which spans more than 50 countries but makes the vast majority of its profits in Asia.

In recent years HSBC's Asia business has done well – fueled primarily by China – but Europe and the U.S. have disappointed.

Before the coronavirus went global the bank announced plans to make $4.5 billion in cost cuts by 2022, with restructuring costs of around $6 billion.

Many of the cutbacks will be in the European and U.S. investment banking sectors, while units in more profitable Asia and the Middle East would be bolstered.

The restructuring plans are the most ambitious since 2012 when HSBC was caught up in a Mexican money laundering scandal.

HSBC warned defaults would increase the longer the pandemic goes on, with the bank expecting between $7 billion and $11 billion in credit losses from clients in 2020.

The biggest risks were currently coming from the "oil and gas, transport and discretionary consumer sectors," the bank said.

But Quinn added it was facing down the global pandemic "from a position of strength" with "robust levels of capital, funding and liquidity."

Jackson Wong, an analyst at Amber Hill Capital, said Tuesday's results were some of the worst for HSBC since the 2008 financial crash and that postponing some restructuring could help with operating costs.

And things could improve if countries make headway against the virus.

"This could be seen as the worst has already happened," he told Agence France-Presse (AFP).

Last month HSBC was one of a number of banks to cancel dividends and buybacks at the request of British regulators.

The move is part of an effort to bolster cash reserves for the economic crisis but it caused anger among investors in Asia where some 90% of HSBC's profits are made.

Before the lunchtime break on Tuesday, the bank's shares were up 1.77% in Hong Kong.

In its results statement HSBC said it plans to review the scrapped dividends policy toward the end of this year.