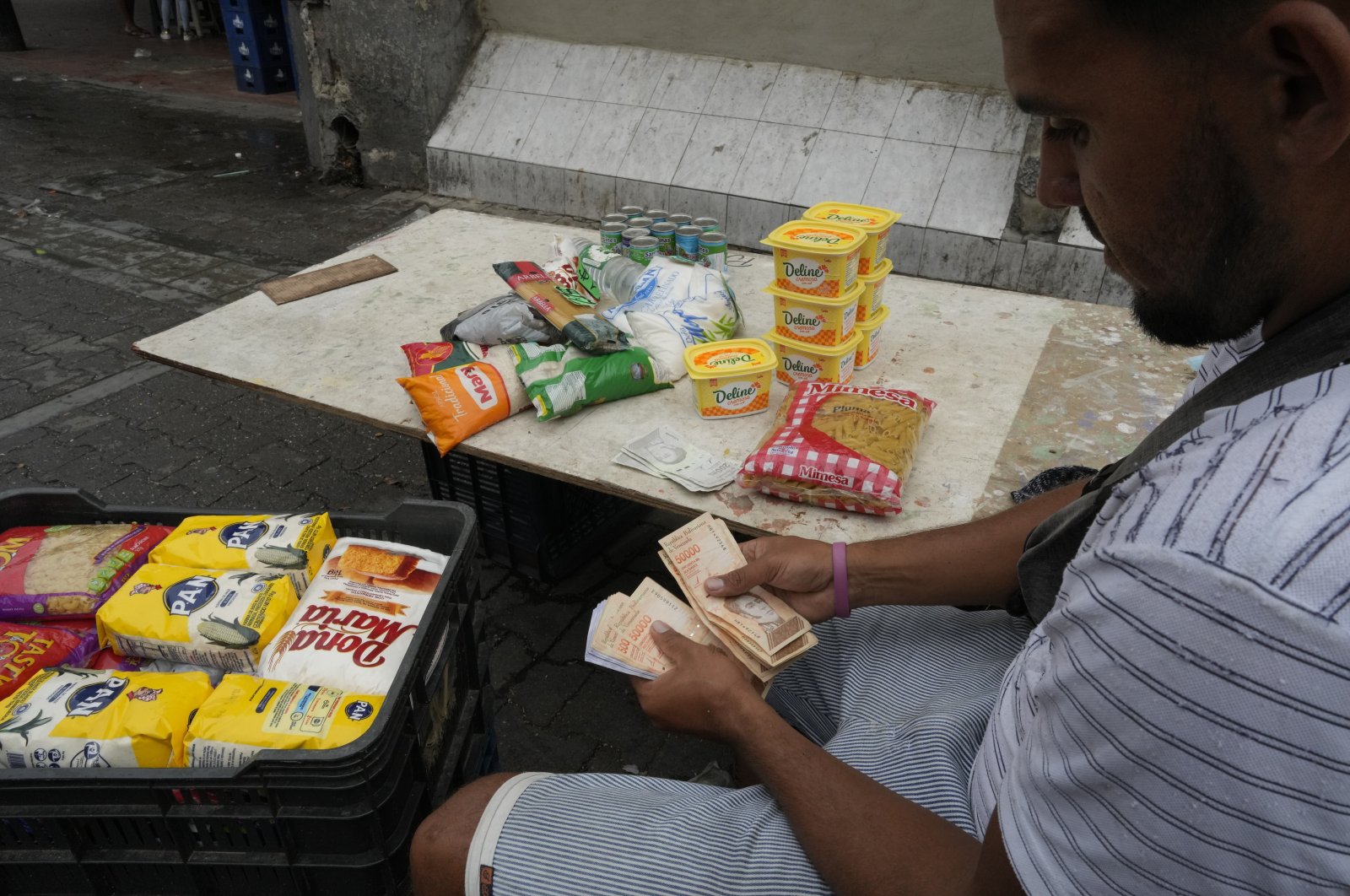 Venezuelan consumers, even those with access to U.S. dollars, are struggling to buy basic necessities as the country’s economic woes worsen.

Yosmar Sanguino says she struggles to put food on the table for her two daughters and three grandchildren in a low-income neighborhood of Latin American country’s capital.

She often whips up arepas – traditional flat, round corn patties – with butter and cheese. But it’s hard to afford even those few ingredients.

And she’s among the relatively fortunate Venezuelans with money sent by a son who emigrated to the U.S. when the effects of the nation’s social, political and economic crises began to be felt more than ever.

More than 40% of Venezuelan households receive some remittances from abroad, which last year were expected to reach $4 billion, according to the consultancy firm Econoanalitica, based in Caracas, the capital. The money often flows through a network of third-party foreign bank account holders who charge commissions, digital payment methods such as Zelle or via friends or relatives traveling home with cash.

The country's socialist government two years ago gave up its long and complicated efforts to restrict transactions in dollars in favor of the local bolivar, whose value has been obliterated by the world's worst inflation.

That has largely ended shortages that for years left markets with chronically empty shelves. But it means many Venezuelans – paid in bolivars whose value evaporates by the day – can't afford what's on those shelves.

The government last week announced it would lop six zeros off the currency – a million-to-1 change – with new bills as of Oct. 1. Currently, the 1 million bolivar note is the largest denomination. It's worth roughly a U.S. quarter.

But without other measures, that would have little to no effect on the continuing erosion of value. The government already had cut three zeros in 2008 and five more in 2018.

Despite repeated multiplications of the official minimum wage earned by millions of Venezuelans, it still amounts to about $2 – not even enough to buy a kilogram of chicken.

Millions of Venezuelans anxiously wait for the semi-monthly arrival of a heavily subsidized box of goods that costs between 43 cents and 62 cents and usually includes corn flour, rice, oil, sugar, pasta and beans. Many scramble to make ends meet with side jobs – home bakeries, haircuts, car repairs, food deliveries, barter.

And for some, the ends don't meet at all.

Per capita consumption of protein dropped 60% between 2013, when President Nicolas Maduro took office, and 2019, according to investment firm Torino Capital. Consumption of chicken plunged 82% during that period, while eggs’ fell 66%.

A report from the U.N. Food and Agriculture Organization (FAO) found that roughly a third of Venezuelans reported they had no food stored up and 11% reported sometimes going a day without food. The U.N. World Food Program (WFP) in 2019 reported that 6.3% of children under five years were acutely malnourished, 13.4% were stunted and 30% were anemic. About 24% of women between the ages of 15 and 49 were also anemic.

The value of the bolivar had been collapsing for years despite – or because of – government efforts to control the exchange rate. It rapidly expanded the money supply even as there was less to spend it on, with an economy that was producing fewer goods and eventually exporting less oil.

But massive blackouts in 2019 began to change the dynamic, said Dagnelly Duarte, an economist for Torino Capital, which has a special focus on Venezuela.

Consumers without an enormous stash of paper bolivars couldn't go to the grocery store because credit card terminals weren't working. People charged $1 to power up cellphones. Bags with ice went for $10. By the end of the year, the government had abandoned efforts to constrict the U.S. dollar.

That was a boon for the private sector, which began importing all sorts of goods that Venezuelans had not seen in years.

Duarte said sellers initially were wary of setting prices in dollars; most customers had none and many feared the government would still crackdown.

But after a while, “it became evident that, ‘Look, I’m using dollars and the sale of the products is flowing better.’”

These days, Duarte said, over 60% of transactions are in U.S. dollars – a fact that snarls life for those without greenbacks.

“It’s very complicated for a person like me, who retired from the university – 27 years of service, professional. I had the position of head of public relations ... and my salary does not even reach $5,” said Germán Socas, who was buying fruits and vegetables at a market in Caracas.

Even dollar prices have risen sharply in part because the currency itself is less scarce. A set of basic goods for a family of five – including flour for arepas, chicken, sardines and butter – in May cost almost four times more in dollar terms than it did two years ago, according to Torino Capital.

“In 2019, when (the use of) the dollar was still restricted, with $100 dollars you could make a complete market run, and you still had plenty. Currently, the basic basket is around $390 (a month),” Duarte said.

The same market basket and public transportation costs for a family of five eat up at least 174 minimum wages – about 1.2 billion bolivars.

The shelves stocked with imported olive oils and imported cheeses give "an image of prosperity” said travel agent Viviana Stifano after visiting a supermarket. “But it is an environment of scarcity at the same time because now there is an excess of products, but you do not have the purchasing power to buy the ones you want. You get what you need to barely live.”

All sides blame part of Venezuela’s problems on falling oil prices. Critics blame government mismanagement and corruption for the collapsing output of the country's main export and its failure to diversify the economy away from oil. From a peak of about 3.2 million barrels of oil a day in 1997, the country with the world’s largest oil reserves today pumps out fewer than 500,000 barrels.

The government blames U.S. sanctions for many of its economic woes and Maduro last month accused a few rich Venezuelans, whom he did not name, of manipulating prices, warning of possible action against them. "There are no untouchables in the Venezuelan oligarchy,” he said.

Price controls, expropriations and other measures also destroyed much of the country’s productive apparatus over the years, and without revenues from oil exports, the government doesn’t have the money for imports to meet its population’s needs.

“In the past, the government would print all the money they wanted and hand it out like confetti all over the economy, and that to some extent, kept the wheels going, if you will, but you still had inequality,” said Raul Gallegos, a risk analyst and author of a book on Venezuela's economic collapse. But now, “In order to survive, you need dollars.”