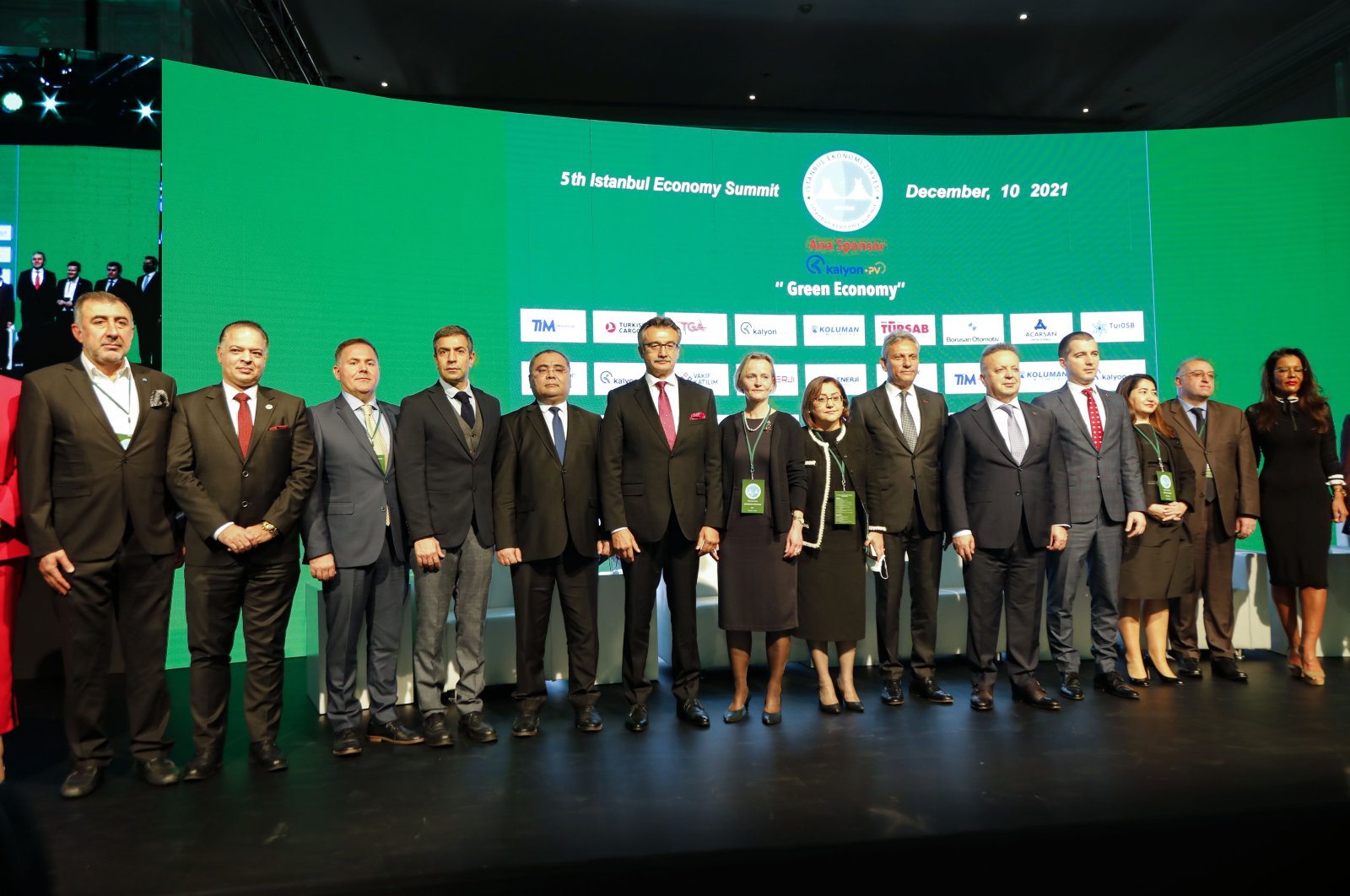 Officials and private sector representatives from Turkey and other countries have highlighted greater need for cooperation and action to address ever-growing climate risk management, also urging a substantial increase in renewable energy investments.

Calls were made on the sidelines of the fifth edition of the Istanbul Economy Summit held in Istanbul on Friday with many officials, executives and private sector representatives from Turkey and other countries in attendance.

Held under the main sponsorship of the major Turkish renewable energy company Kalyon PV, the daylong summit took place under the theme of “Green Economy.”

Attendees addressed clean energy, its importance and economic impact, climate change, the world’s process of change and transformation in renewable energy, digital agriculture, ecotourism, autonomous systems as well as new balances in the supply chains disrupted by the coronavirus pandemic.

Far away from targets

Addressing the event, Abdullah Değer, chairperson of the executive committee of the Istanbul Economy Summit, noted the enormous damage that has been done to nature over the last 100 years, stressing it was still not too late to leave a better world for the future generations.

For his part, Istanbul Economy Summit Chairperson of the Board Kürşad Tüzmen warned the world was still far away from the targets set in the Paris climate agreement.

However, Tüzmen said the COP26 U.N. Climate Change Conference in Glasgow, Scotland last month demonstrated that “we are 80% away” from achieving this goal.

He highlighted that developing countries cannot easily achieve a green economy awareness, yet he conveyed that developed nations had also failed to fulfill their commitments.

“We can overcome this issue if the countries focus with dedication,” Tüzmen said. He stressed that Turkey has two major driving forces, exports and tourism, noting that these should be the country’s main focus.

“We can provide resources to the green economy by using our export and tourism resources,” he said.

Also addressing the event, Ismail Gülle, head of the Turkish Exporters’ Assembly (TIM), said working toward a green economy is crucial so that we leave a better world for future generations.

Gülle emphasized the need to develop environmentally friendly policies that aim to utilize resources effectively and avoid waste. He also noted that the profit-driven goals of advanced economies were detrimental to the environment.

He added that China, the U.S. and India are the top three countries in terms of global carbon emission. Turkey’s share stands at roughly 1%, Gülle said.

He also recalled the importance of the landmark Paris accord, which Turkey signed recently.

Turkey in October became the last country in the G-20 group of major economies to ratify the Paris climate agreement, after demanding for years that it must first be reclassified as a developing country, which would entitle it to funds and technological help.

Ankara signed the Paris accord in April 2016 but did not initiate the ratification process, arguing that it should not be deemed a developed country for the purposes of the accord and was responsible for a very small share of historic carbon emissions.

Firuz Bağlıkaya, the head of the Turkish Travel Agencies Association (TÜRSAB), said the pandemic has caused massive changes in the means of production and consumption.

A shortage of resources and climate change has made the focus on green economy doubly important, Bağlıkaya noted.

Worst crisis of the century

The green transition has two priorities: equality of opportunity and digitalization, said Annemarie Straathof, vice president of the European Bank for Reconstruction and Development (EBRD).

“There is an increasing awareness of climate change as a source of grace, but also opportunities for businesses and finance,” she added.

“We want to draw attention to energy efficiency. We aim to reduce cumulative greenhouse gas emissions. Our work goes in parallel with the Paris Agreement and the areas related to climate change. The climate crisis is the biggest disaster of our century and its urgency is certain.”

“There are many opportunities that we, as governments, can do together. The pandemic has also taught us important lessons. We should conduct direct research to reduce carbon dioxide and then be able to make applications in this field,” Abdurakhmonov noted.

Aleksa Becic, chair of Montenegro’s parliament, said steps toward a green economy should be discussed across all platforms and relevant policies should be developed.