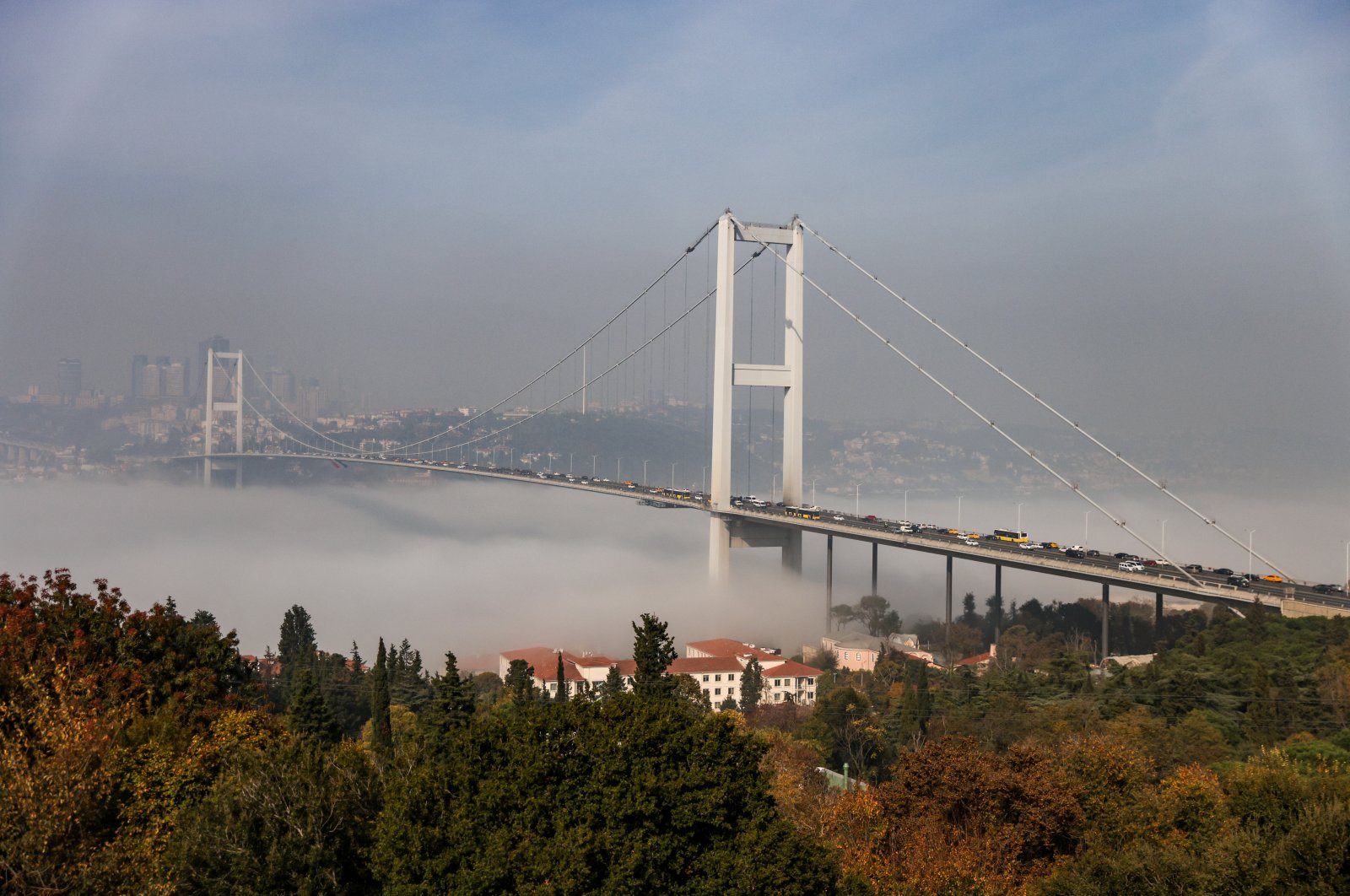 The 15 July Martyrs Bridge, formerly known as the Bosporus Bridge, which links the city's European and Asian sides, is pictured as fog covers the Bosporus in Istanbul, Turkey, Nov. 6, 2021. (Reuters Photo)
by DAILY SABAH WITH AA Nov 08, 2021 3:35 pm
RECOMMENDED

The Italian business and industry world’s interest in investing in Turkey is gradually increasing, representatives of the sector said Monday, as the country has become a competitive alternative to both China and Eastern European countries.

Turkey continues to attract the attention of companies looking for an alternative to China, especially during the pandemic period, with advantages such as its geographical location, logistics opportunities, qualified workforce and production flexibility in the industry, they said.

Livio Manzini, head of the Italian Chamber of Commerce and Industry Association, told Anadolu Agency (AA) that the import-export level between Italy and Turkey will reach $20 billion again this year.

This figure can be seen as insufficient as it has the potential to reach up to $30 billion in five years; however, Manzini said, “there is one feature of the import-export volume between Italy and Turkey – it is balanced.”

“The trade volume between Italy and Turkey is $20 billion, $10 billion of Turkish side, $10 billion Italian side. It also shows how deep the commercial and industrial relations are,” he said.

Investment volume, on the other hand, does not have such a linear relationship, the Italian trade official continued.

“But the line is positive and the good thing is that now Turkish companies are also investing in Italy,” he said, as Turkey has now “become a capital-exporting country,” and that “Italy is a country that wants to attract Turkish capital.”

He provided the example of the Turkish company Şişecam’s investment in Italy as one of the beneficial, and perhaps one of the biggest, investments in his country.

Pointing out that there are Italian companies among the companies that plan to shift investment plans and current production to Turkey from China, Manzini said one of the main reasons is that bringing intermediate products from China is no longer advantageous in terms of logistics.

“China has gained a significant market share due to economies of scale, cost advantages in many areas, but during the pandemic, these distances have emerged as weak points,” he said along with political conflicts with China that have started to create a second risk factor, all leading international firms to search for alternatives in supply chains.

“Turkey may not be as cheap as China, but competition is not just about the cheapness of the goods, there is service, there is order size, there is flexibility, there are many issues and price is just one of them. When we look at the total, Turkey is very competitive,” Manzini said.

There are other alternatives such as Eastern European countries, he said but the population is a problem there.

“There is a balance in Turkey,” he said and explained, “in terms of population, demographics and capabilities ... You find engineers, you find workers, you find qualified personnel. You also find people who can speak foreign languages.”

Gianluca Guerriero, director of the Economy and Trade Office of the Italian Embassy, said that Italy is Turkey's largest commercial partner in the Mediterranean region and the third-largest partner in the world.

“When we look at the first eight months of 2021, the export and import figures between Italy and Turkey are very balanced. We see that it is progressing at almost the same figures, it is ahead of the previous years of 2020 and 2019, and it has reached much larger figures.”

Stating that approximately 1,600 Italian companies are operating in many sectors in Turkey, Guerriero said, “These collaborations and investments will continue.”

Guerriero stated that although he does not have detailed information, Italy’s Bianchi has announced that it will invest 10 million euros ($11.58 million) to conduct a part of its production in Turkey’s western city of Izmir.

Italian Foreign Trade and Promotion Agency (ITA) Istanbul Office Manager Riccardo Landi, meanwhile, said that they operate under the coordination of the Italian Ministry of Foreign Affairs, that they have nearly 70 offices all over the world and that the Istanbul office is one of the most important.

Pointing out that they support mainly small and medium-sized Italian enterprises (SMEs) investing in Turkey and that they have duties such as attracting foreign investment to Italy, Landi said: “Over the past month we have been receiving an increasing number of requests from small and medium-sized Italian companies interested in investing in Turkey. They want to invest in Turkey, not only because of the importance of the Turkish market but also because Turkey as a hub is located in a very large region with many different markets such as Eastern Europe, Central Asia, Middle East and Africa.”