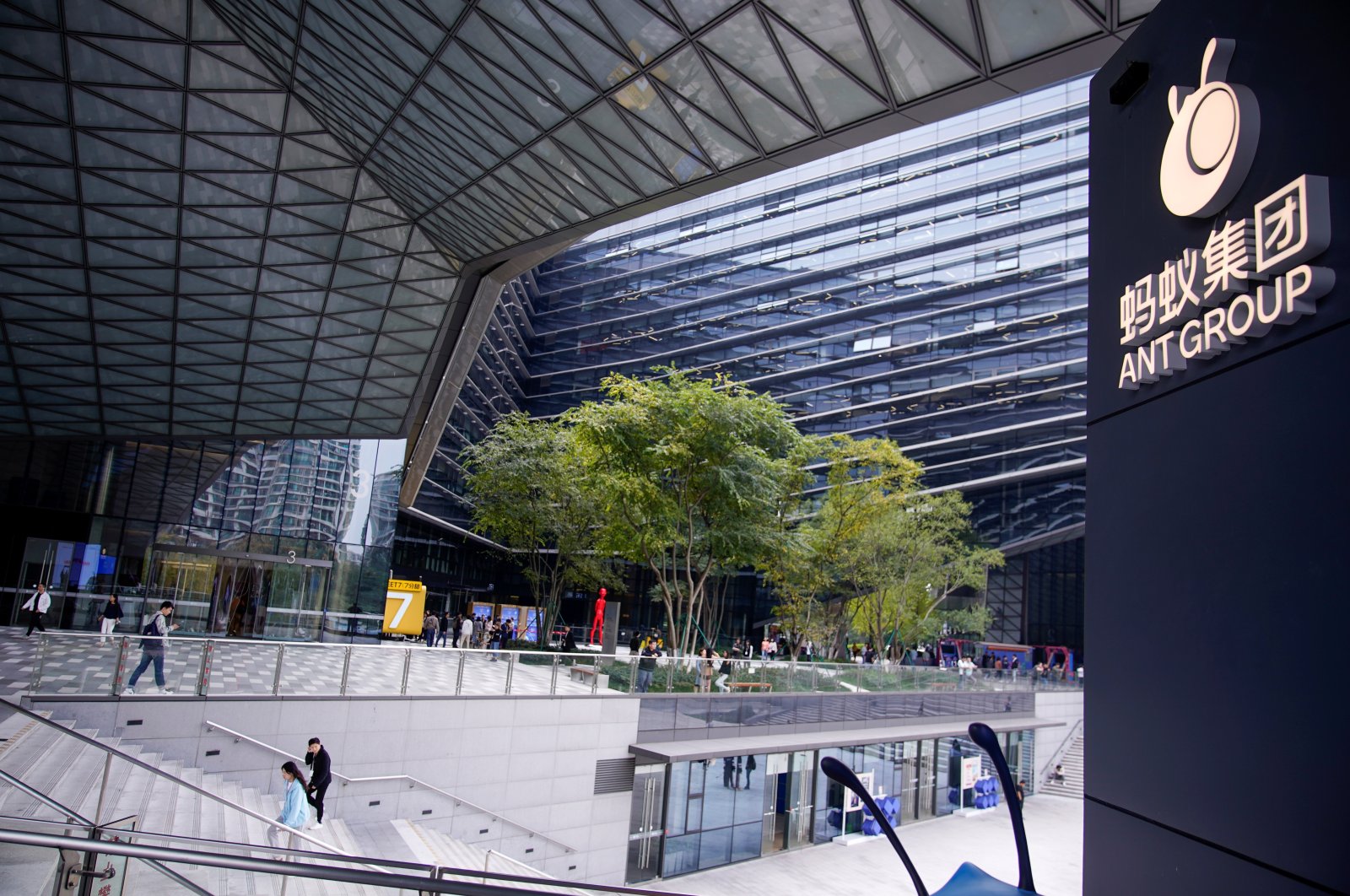 A logo of Ant Group is pictured at the headquarters of the company, an affiliate of Alibaba, in Hangzhou, Zhejiang province, China, Oct. 29, 2020. (Reuters Photo)
by REUTERS Nov 04, 2020 4:29 pm
RECOMMENDED

Mom-and-pop investors who put in bids worth a record $3 trillion in China's Ant group – equivalent to Britain's annual economic output – were stunned after regulators abruptly suspended what would have been the world's largest stock market debut.

China blocked the fintech giant’s $37 billion listing on Tuesday, thwarting its debut in Hong Kong and Shanghai scheduled for Thursday and dealing a severe blow to the company founded by billionaire and Alibaba co-founder Jack Ma.

Retail investors in the two markets – from taxi drivers to students and young professionals – used their savings and borrowed heavily from banks and brokerages for what many saw as a once-in-a-lifetime investment opportunity.

"I feel like I made a very wrong decision," said 21-year-old Hong Kong resident and Cambridge student, Vincent Tse, who applied for 2,000 shares worth around 160,000 Hong Kong dollars ($20,640) which he earned doing a part-time job.

"This situation really reveals a deep problem in the Chinese market and shows a lack of experience in holding such a large IPO," Tse said, adding that he would no longer invest in Ant and reinvest in U.S., European or Japanese stock markets.

In China, investors cited the changing business environment as a key factor weighing on Ant's future development with some saying they would still be keen to invest.

"I'd probably invest again just because of the sheer size of the market share Ant Financial has," said a 21-year-old student investor in Beijing who goes by the name Clementine.

The unprecedented retail frenzy for Ant's shares was backed by a massive amount of margin lending by financial institutions in mainland China and in Hong Kong, with brokerages in Hong Kong lending billions of dollars.

Some banks in Hong Kong offered as much as 30 times leverage at interest rates of between 0.4% and 0.5% for a period of around 10 days, banking industry sources have said.

Ant said in a statement to the Hong Kong stock exchange on Wednesday that it would refund the application money for the Hong Kong leg of the offering without interest over the next couple of days.

Several Hong Kong brokers said they would waive handling fees and interest rates on margin loans for investors who had subscribed for Ant shares. When contacted by Reuters, major lenders HSBC and BOC Hong Kong Holdings Ltd. did not comment.

Bright Smart said in a statement yesterday that listed companies should be required to compensate investors in such situations.

Billy Ng, a property manager in his 40s, who subscribed for 20,000 shares on margin financing, said the suspension was political in nature.

Ant apologized to investors for any inconvenience, adding it would give further details on the suspension of its listing and applications for refunds as soon as possible.

"It's a joke on the Chinese stock exchange," said a 37-year-old secretary who wanted to be known only as Olivia, in reference to the Shanghai bourse disqualifying Ant from listing.

"If Ant lists again, I'm not sure I'll subscribe again because if its business model changes then it might be less attractive than before," she said, adding that she had been allotted 50 of the 350 shares she applied for.