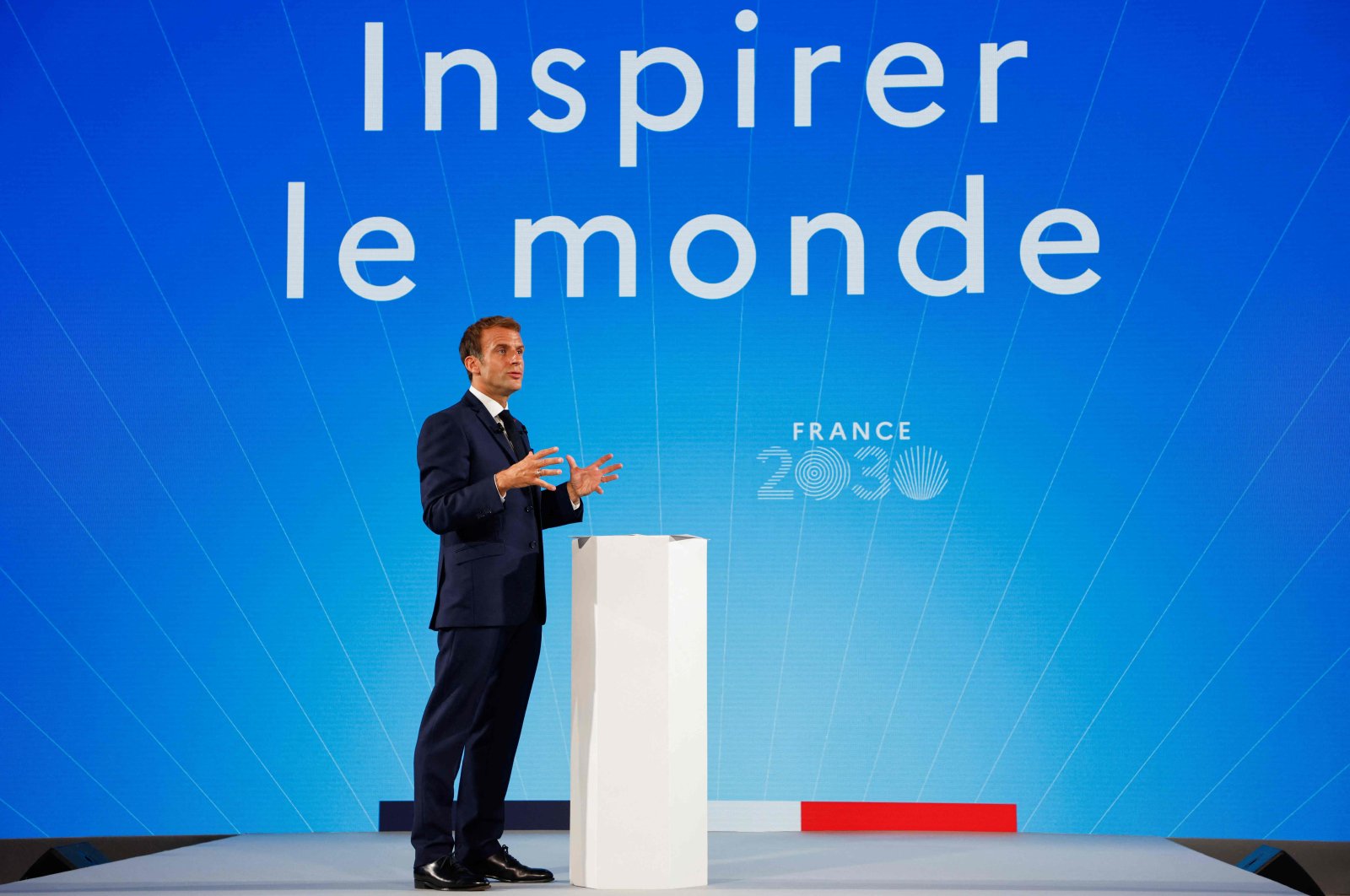 French President Emmanuel Macron gestures as he speaks in front of a screen with the words reading "Inspire the world" during the presentation of the "France 2030" investment plan at The Elysee Presidential Palace in Paris, France, Oct. 12, 2021. (AFP Photo)
by French Press Agency - AFP
Oct 12, 2021 5:37 pm

French President Emmanuel Macron Tuesday announced a plan worth 30 billion euros ($35 billion) to reindustrialize his country on the basis of innovative and green-friendly technologies including electric cars, hydrogen fuel and efficient nuclear plants.

Six months before a presidential election and one month ahead of a United Nations climate summit, Macron said France had taken key decisions "15-20 years later than some of our European neighbors" and now needed "to become a nation of innovation and research again."

The spending was to address "a kind of growth deficit" for France brought on by insufficient investment in the past, he told an audience of company leaders and university students at the Elysee Palace.

France, he said, needed to return to "a virtuous cycle" that consisted of "innovating, producing and exporting, and in that way finance our social model" as part of a new "France 2030" plan.

Over the next decade, France would aim to become a global leader in green hydrogen, which companies and governments are increasingly putting at the center of efforts to decarbonize economic sectors that rely most on fossil fuels for their energy needs.

France would get two electrolysis giga-factories for hydrogen production, as part of 8 billion euros of investment in the energy sector.

He said that following the COVID-19 pandemic, "which put us face to face with our vulnerabilities," France had to work toward French and European productive autonomy.

After the global COVID-19 outbreak, French pharma giants were unable to come up with a vaccine, unlike biotech startups BioNTech and Moderna.

The aim was now for France to develop "at least 20" biotech drugs against cancers, as well as against emerging and chronic illnesses, including those associated with aging, Macron said.

"We need to concentrate all our efforts on this objective," he said.

A French presidential official, who asked not to be named, said Macron had laid out the plan in the wake of the coronavirus crisis "which showed our vulnerability and our dependence on foreign countries in some key sectors but also the importance of innovation which can change everything."

French officials believe that France needs to act rapidly to close the gap and not surrender more ground to emerging powers, notably China.

French carmakers, which Macron said had suffered "cruelly" over the past 30 years, should redirect their efforts toward cleaner vehicles, with a target of putting 2 million electric or hybrid cars on the roads.

France would also invest "massively" to get the first low-carbon aircraft into the air with the help of European partners, he said.

Disruptive innovation was also needed in agriculture, where 2 billion euros would be earmarked for new technologies, he said, especially in robotics.

France should start "a new revolution" in food production which should be "healthy, sustainable and traceable."

Agriculture would become cleaner, phase out "some pesticides," enjoy greater productivity and develop "bio-solutions" that would be "more resilient and more solid," the president said.

Close to 6 billion euros were meanwhile earmarked for France's electronics sector with the aim of doubling production and "secure" the country's supply needs for microchips.

Opposition figures were quick to criticize Macron for the timing of the announcement, with Marine Le Pen, his far-right challenger in the April 2022 presidential election, saying he was "making promises that his successor has to keep."

Leftist candidate Jean-Luc Melenchon called the speech "Macronian propaganda," while nongovernmental organization (NGO) Greenpeace meanwhile accused Macron of subscribing to a logic that "always delays any real transition and continues to produce as if the planet's resources were infinite."