Migrant workers hesitant to return India, firms desperate to take them back 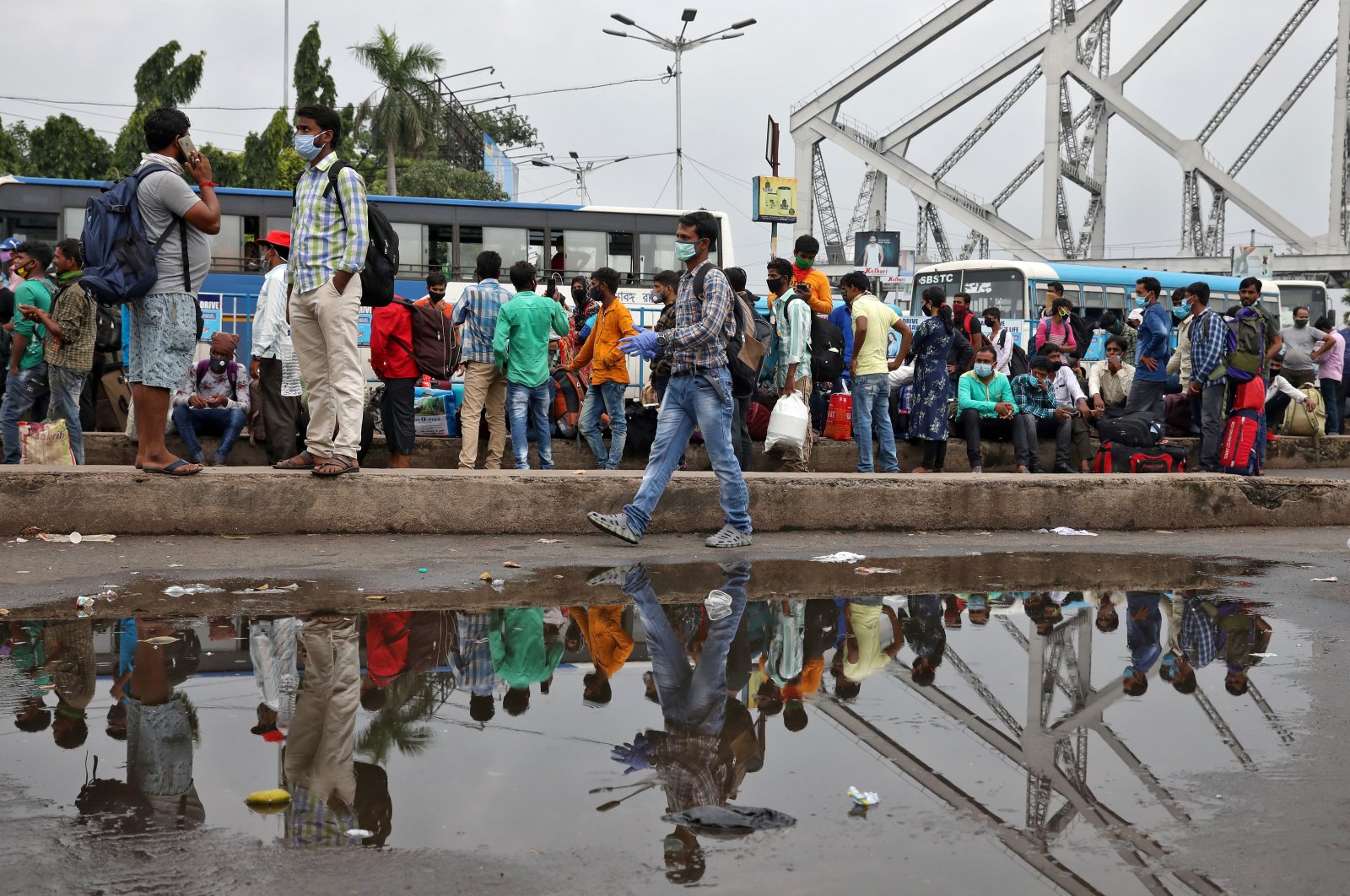 Migrant workers wait for transport outside the Howrah railway station after authorities announced a lockdown for two days every week in the West Bengal state, amid the spread of the coronavirus, in Kolkata, India, July 23, 2020. (Reuters Photo)
by French Press Agency - AFP Jul 26, 2020 3:44 pm
RECOMMENDED

Spurning free air tickets, accommodation and higher pay, millions of migrant workers who fled India's cities when the coronavirus hit are too scared to return, with grim implications for the already crumbling economy.

Migrant laborers form the backbone of Asia's third-biggest economy toiling in every sector from making consumer goods and stitching garments to driving cabs.

But when India went into lockdown in late March, vast numbers lost their jobs, prompting a huge heart-rending exodus back to their home villages, sometimes on foot, their children in their arms.

Some died on the way.

Mumbai's swanky high-rises, for example, were built and largely staffed by people from poorer states such as Uttar Pradesh, Bihar and Odisha, who worked as security guards, cooks and cleaners.

But as the city became a virus hot spot, around 80% of construction workers left the financial hub after work came to a standstill, according to the Maharashtra Chamber of Housing Industry.

Four months on, with lockdown measures eased, some workers have trickled back, but more than 10,000 building sites are lying virtually abandoned due to severe labor shortages across the city.

"We are trying our best to bring back migrant workers, even going to the extent of giving them air tickets, COVID-19 health insurance ... (and) weekly checkups by doctors," real estate developer Rajesh Prajapati said.

"But it has not reaped any positive signs yet," he told French Press Agency (AFP).

Property giant Hiranandani Group which, unusually, continued to pay its workers during lockdown, has had more success but has still only managed to convince around 30% of its 4,500 workers to stay on site.

"We looked after them, took care of their food, safety and sanitization and even had mobile creches for kids," the group's billionaire co-founder Niranjan Hiranandani told AFP.

With a colossal slump in growth expected, Prime Minister Narendra Modi's government has steadily eased restrictions on many businesses even as coronavirus cases surge toward 1.5 million.

But analysts say firms are still staring at a bleak future due to battered finances, stalled projects and crucially, a lack of workers.

Real estate demand has plummeted by almost 90% in Mumbai alone, with falling sales and the lull in construction severely affecting access to credit.

"We have a double whammy with the pandemic eroding demand while construction workers are not available," Pankaj Kapoor, CEO of Mumbai-based consultancy Liases Foras, told AFP.

"Credit flow from the lender has (also) stopped because ... credit disbursal is based on construction progress and sales," he said, projecting the turmoil to deepen.

Business owners in other fields paint an equally grim picture.

Aseem Kumar, general secretary of the Garment Exporters Association of Rajasthan, told AFP his sector was "in a mess."

The organization represents 300 manufacturers exporting clothing to Japan, the United States and Europe. Many have offered workers accommodation, insurance and a 20% raise, but to little avail.

"Most of the orders have been deferred to next season as there are no laborers available," he said.

A lack of transport means that even those who are willing to swallow their fear and return to work – many are desperate to do so – are unable to.

Construction worker Shambu told AFP his family of four was on the brink of destitution after he fled Mumbai, reduced to living on 200 rupees ($2.70) a week.

Unlike his compatriots, the 27-year-old, who goes by one name only, was able to travel by rail to Odisha – a possibility that is now firmly out of reach because most trains are not running.

"Almost 50% of people I know are ready to return if trains are restarted," he said.

"It is better to go to big cities and work than sit in villages and starve to death."