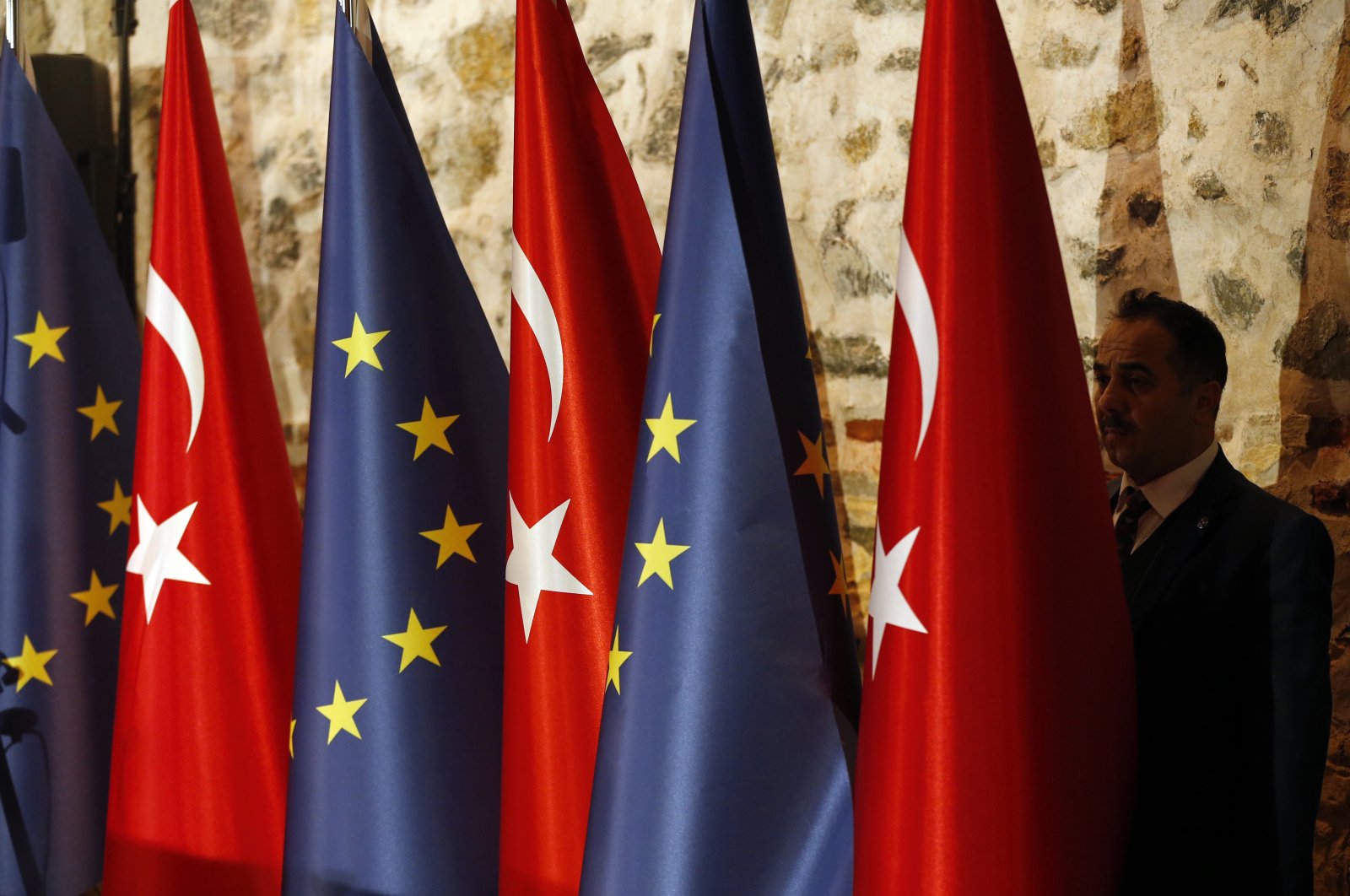 An official adjusts the flags of Turkey and the European Union prior to the opening session of a high-level meeting between the EU and Turkey, in Istanbul, Turkey, Feb. 28, 2019. (AP Photo)
by DAILY SABAH Dec 09, 2020 1:57 pm
RECOMMENDED

The difficulties brought along by the coronavirus pandemic have made it imperative to update the customs union agreement between Turkey and the European Union, Trade Minister Ruhsar Pekcan said Wednesday.

"The challenges the coronavirus has brought on for the global economy have further reinforced the need to update the customs union and the need to restructure existing value chains around the world," Pekcan told the newly appointed EU trade commissioner and European Commission vice president, Valdis Dombrovskis, in a videoconference.

Dombrovskis was appointed to his position earlier in October.

"It is important that the existing agreement is both expanded to cover new areas and updated to address structural problems," Pekcan said.

"We also expect the European Commission's support on this issue," she added.

Dombrovskis said Turkey is a key partner as it is integrated into the EU's value chains, thanks to the customs union.

He stressed that Turkey-EU relations are very important for citizens on both sides, the business world and the region. Turkey is of strategic importance for the EU, he added.

The official's remarks come amid a row over natural gas exploration in the Eastern Mediterranean that has drawn the threat of sanctions from EU leaders, who are to gather for a summit Thursday.

Ankara has rejected the bloc's statements it was stoking tensions, saying member state Greece had continued "provocative" steps despite Turkey's diplomatic efforts and its call for dialogue.

In addition to the customs union update, a statement by the Trade Ministry said Pekcan and Dombrovskis also discussed bilateral trade ties, Brexit and curbs on steel import.

Pekcan stressed that despite challenges in global trade and the economy, close cooperation between the EU and Turkey has become even more important.

Improving bilateral trade relations is important in terms of strengthening value chains in the European region and increasing competitiveness, the minister said.

Pekcan added that updating the customs union agreement serves the economic interests of both sides and would provide many mutual gains.

The current structure in the deal is insufficient to meet today's requirements, Pekcan said.

Officials have said with the inclusion of these sectors, bilateral trade between Turkey and the EU could reach $300 billion (TL 2.35 trillion), a substantial increase from the current $165 billion.

"In addition to systemic and specific structural problems, the agreement does not cover sectors such as services or e-commerce. In the digital age we live in, the importance of these areas is increasing," Pekcan said.

Pekcan also raised Turkey's concerns and expectations regarding the EU's trade measures on steel products, noting that Turkey is the country most negatively affected by these.

She demanded that the measures be reviewed under the agreements between the two sides and the spirit of partnership.

Turkish and European officials have over the last couple of years carried out talks on revising the current deal. Although the talks have been stalled as a result of political tensions over the last three years, business circles and officials on both sides have endeavored to maintain dialogue.

On Brexit, the minister emphasized that Turkey aims to enact a free trade agreement (FTA) with the U.K. simultaneously with London's deal with the bloc.

Major trade partners Ankara and London have held a series of talks on the trade deal, which officials recently said was very close to finalization.

The U.K. left the EU on Jan. 31 after 47 years of membership but remains within the bloc's tariff-free single market and customs union until the end of the year.

Reaching a trade deal by then would ensure there are no tariffs or quotas on trade in goods on Jan. 1, although there would still be new costs and red tape for businesses.

Any Turkey-U.K. deal would only be able to take place following an EU-U.K. free trade agreement, as Turkey is a member of the EU customs union.

Fears of a chaotic no-deal finale to the five-year Brexit crisis has grown over recent days as trade talks stalled. Leaders of Britain and the EU will meet Wednesday for a dinner that could pave the way to a post-Brexit trade deal – or tip the two sides toward a chaotic economic rupture at the end of the month.