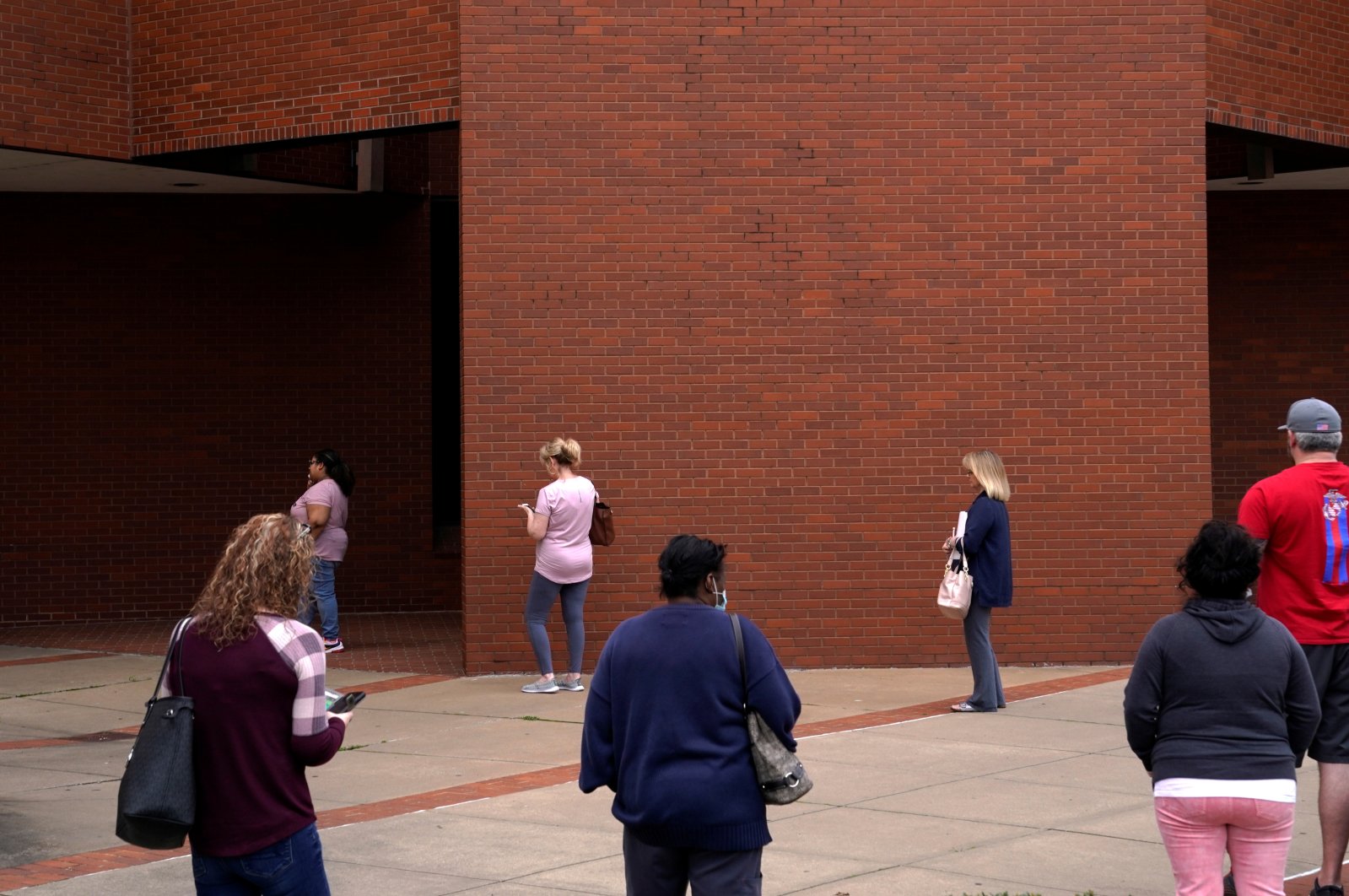 People who lost their jobs wait in line to file for unemployment benefits during the coronavirus outbreak, at an Arkansas Workforce Center in Fort Smith, Arkansas, U.S., April 6, 2020. (Reuters Photo)
by Compiled from Wire Services May 28, 2020 1:13 pm

Even though the number of first-time applicants for unemployment payments has fallen for eight straight weeks and states are gradually letting businesses reopen, other employers are still laying off workers in the face of a deep recession

Roughly 2.1 million Americans applied for unemployment benefits last week despite the gradual reopening of businesses around the country, bringing the running total since the coronavirus shutdowns took hold in mid-March to over 40 million, the government said Thursday.

The figures underscored the continuing damage to businesses and livelihoods resulting from the COVID-19 outbreak that has now killed over 100,000 people in the U.S., more than the number of Americans lost in the Vietnam and Korean wars combined, and more than 33 times the death toll on 9/11.

The national jobless rate was 14.7% in April, the highest since the Great Depression, and many economists expect it will near 20% in May.

New claims for state unemployment benefits totaled a seasonally adjusted 2.123 million for the week ended May 23, from a revised 2.446 million in the prior week, the Labor Department said.

First-time applications for unemployment, though still extraordinarily high, have fallen for eight straight weeks, while states are gradually letting stores, restaurants, salons, gyms and other businesses reopen. But other employers are still laying off workers in the face of a deep recession.

Economists polled by Reuters had forecast initial claims falling to 2.1 million in the latest week from the previously reported 2.438 million. Though claims have declined steadily since hitting a record 6.867 million in late March, they have not registered below 2 million since mid-March.

The weekly jobless claims report, the most timely data on the economy's health, is being watched to assess how quickly the economy rebounds after businesses shuttered in mid-March to control the spread of COVID-19 and almost ground the country to a halt.

States are gradually restarting their economies by letting some businesses – from gyms, retail shops and restaurants to hair and nail salons – reopen with some restrictions. As some of these employers, including automakers, have recalled a portion of their laid-off employees, the number of people receiving unemployment benefits has fallen.

Analysts are monitoring incoming economic data to gauge how consumers are responding to as many retail establishments gradually reopen. Jobs won’t return in any significant way as long as Americans remain slow to resume spending at their previous levels.

Data from Chase Bank credit and debit cards shows that consumers have slowly increased their spending since the government distributed stimulus checks in mid-April. Consumer spending had plunged 40% in March compared with a year earlier but has since rebounded to 20% below year-ago levels.

Most of that increase has occurred in online shopping, which has recovered to pre-virus levels after having tumbled about 20%. But offline spending, which makes up the vast majority of consumer spending, is still down 35% from a year ago, according to Chase, after having plummeted 50% at its lowest point.

The number of claims, stuck at an astonishingly high level even as non-essential businesses are starting to reopen, suggests it could take a while for the economy to dig out of the coronavirus-induced slump despite signs from the housing market and manufacturing that the downturn was close to bottoming.

"I am concerned that we are seeing the second round of private-sector layoffs that, coupled with a rising number of public-sector cutbacks, is driving up the number of people unemployed," said Joel Naroff, chief economist at Naroff Economics in Holland, Pennsylvania.

"If that is the case, given the pace of reopening, we could be in for an extended period of extraordinarily high unemployment. And that means the recovery will be slower and will take a lot longer," he said.

In a separate report on Thursday, the Commerce Department said gross domestic product contracted at a 5.0% annualized rate in the first quarter, the deepest drop in output since the 2007-09 Great Recession, rather than the 4.8% pace estimated last month.

The downward revision to the first-quarter gross domestic product (GDP) reflected weaker investment by businesses in their inventories which was partially offset by slightly stronger consumer spending.

The economy is thought to be shrinking in the April-June quarter at an annual rate approaching 40%. That would be, by far, the worst quarterly contraction on record.

The U.S. Federal Reserve (Fed) detailed Wednesday what most of the nation is already acutely aware of: Economic activity fell sharply around the country in April and May as measures to combat the spread of the outbreak took hold.

Drawing on reports from its 12 regions, the Fed noted that consumer spending dropped sharply as mandated closure of many retail establishments remained in place. Auto sales were also down sharply from a year ago. The Fed's report also pointed to sharp declines in U.S. manufacturing, with output notably weak in autos, aerospace and energy-related manufacturing.

The Fed's report, known as the beige book, will be used as a basis for discussion on the economy when the central bank's policymaking committee meets on June 9-10 to decide its next moves on interest rates.

Since the global pandemic began, the central bank has cut its benchmark interest rate to a record low near zero and pumped billions of dollars into the financial system to ensure an uninterrupted flow of credit.

The Fed said that layoffs would have been even more severe, but the Small Business Administration's Paycheck Protection Program helped many businesses to limit or avoid layoffs.

The second wave of layoffs could grow bigger, with Boeing announcing Wednesday it was eliminating more than 12,000 U.S. jobs and also disclosing it planned "several thousand remaining layoffs" in the next few months.

The Fed's depiction of the labor market said "employment continued to decrease in all districts" and "continued to fall sharply in retail and the leisure and hospitality sectors."

In addition to the spillover to segments of the economy not initially impacted by the closure of nonessential businesses, some economists have said initial claims were staying elevated also because of backlogs from the flood of applications that overwhelmed state unemployment offices.

But this was dismissed by many who argued these backlogs should have been eliminated by now.