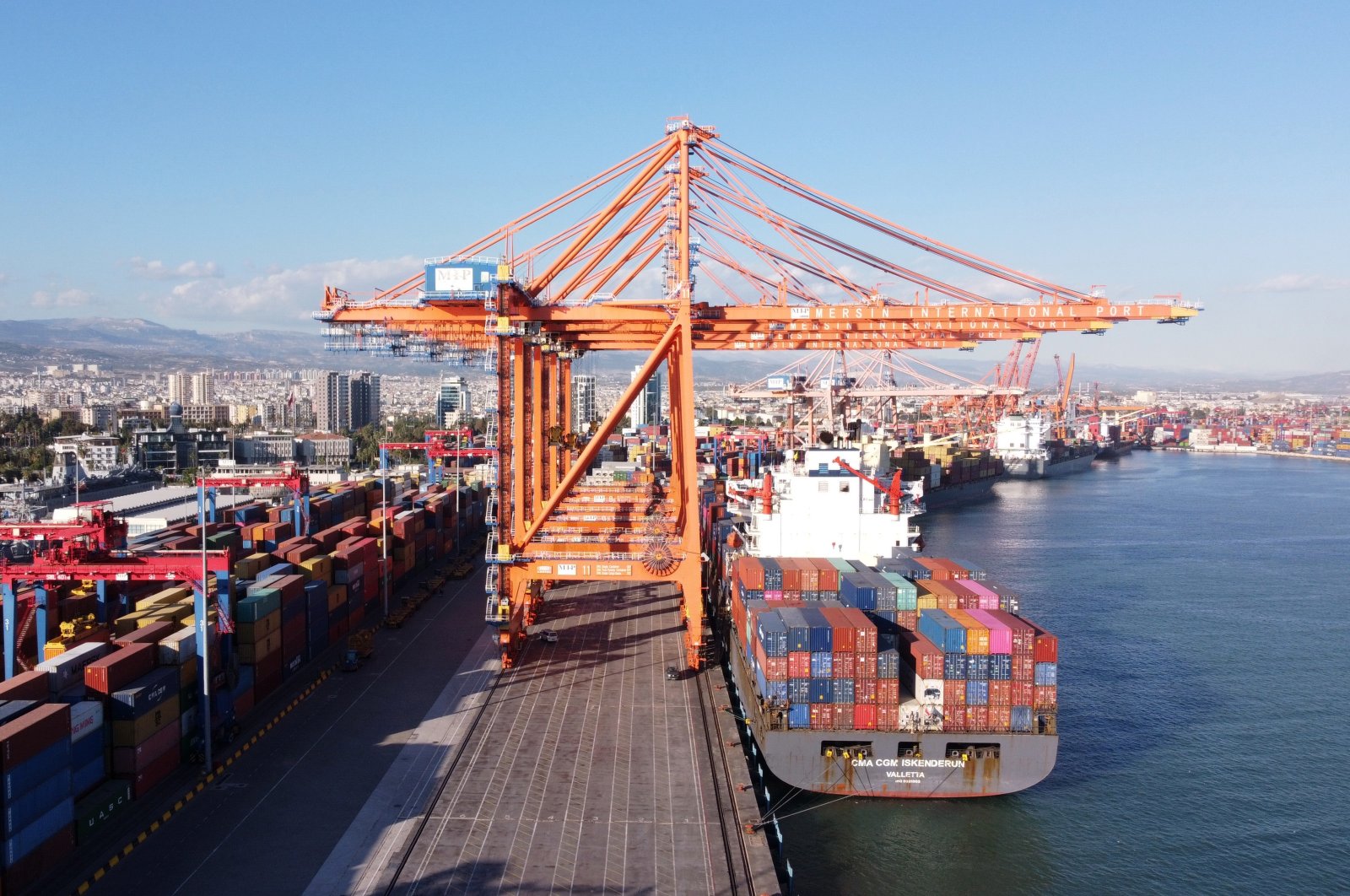 Containers are seen at the Mersin International Port in the southern province of Mersin, Turkey, Dec. 7, 2021. (AA Photo)
by DAILY SABAH WITH AA Dec 07, 2021 2:49 pm
RECOMMENDED

Turkey's ports face a major increase in workload as foreign sales continue to soar, revealing one of the brightest sides of the country's strong rebound amid a turbulent year for global trade.

After being hit in spring last year as the COVID-19 pandemic hurt trade with Ankara’s biggest partners, Turkey’s exports surged 34% year-over-year to over $203 billion (TL 2.7 trillion) from January through November of this year, marking an all-time 11-month high.

Imports climbed to 22.9% year-over-year to $243.3 billion, according to the Turkish Exporters Assembly (TIM) data.

Major local ports have rolled up their sleeves to handle the high capacity and made serious efforts to boost investments to navigate the challenging global trade environment.

One of these is the international port in southern Mersin province, which stands out as one of the most important transfer locations for exported products.

The 92nd largest container terminal in the world and one of the largest ports in Turkey, Mersin International Port (MIP) has a nearly 2.6-million-container capacity. The shipping container has a 20-foot (6-meter) equivalent unit (TEU) dimension.

MIP is connected via railways and highways with Turkey’s industrialized cities such as Ankara, Gaziantep, Kayseri, Kahramanmaraş and Konya, and bordering countries including Syria and Iraq as well as the Commonwealth of Independent States (CIS) members including Azerbaijan, Belarus, Kazakhstan, Kyrgyzstan, Moldova and Russia.

A partnership between Turkey’s Akfen Holding, Singapore’s PSA International and Australia’s IFM Investors, MIP is one of the main container ports in the Mediterranean region with its transit and hinterland connections with the Middle East and the Black Sea.

The capacity of handling at the port, which includes exports, imports and transit cargos, surpassed 2 million TEU even in 2020, which was overshadowed by major disruptions in global trade. It is now expected to reach 2.1 million TEU in 2021.

It is a multi-purpose port that provided terminal services for 3,584 containers and conventional vessels in 2020.

“Looking back over the last 14 years since its privatization, MIP has achieved an average annual growth rate of about 7.5%. This excellent annual growth rate has made MIP the largest container terminal in the country for the last three consecutive years,” said its General Manager Johan Van Daele.

Due to its location at the center of the main east-west and north-south routes, MIP serves its hinterland as the crucial logistics hub connecting Turkey with the Far East, Africa, Europe, and the Americas.

The port not only connects Turkey with the world for exports but also supports the industry with strong necessary imports of basic raw materials, Van Daele told Anadolu Agency (AA).

“MIP is connected to the hinterland by railways and highways and is adjacent to the Mersin Free Zone and the strong industrial zones nearby. Therefore, MIP meets the demand for port services for container and conventional cargos as well as various Ro-Ro (roll-on/roll-off) activities,” he said.

Moreover, he said, being in Çukurova, MIP is a strategic export loading port for citrus and other fresh fruits that mainly connects to the Black Sea region and the Middle East countries.

Turkey’s 12-month rolling sales have reached an all-time high of $221 billion, according to TIM data, signaling that the country will well exceed its year-end goal of $211 billion in foreign sales, set in the government’s economic program.

The port in Mersin handles 22% of Turkey’s exports in containers and 7% in conventional cargo.

“On the other hand, MIP is aware of its role in regional transit to the CIS countries, Iraq, Northern Cyprus and many other neighboring countries with direct transit and indirectly with a significant amount of processed raw materials for export to such locations,” said Van Daele.

The maritime industry is a fast-growing field, and work done with two ships in the past is now done in one with larger ships. Thus, ports must build docks, sites and equipment to accommodate new ship sizes.

Located next to the main navigational routes from East to West, MIP also needs the excess capacity to become a global container market player and host mega vessels, according to Van Daele.

The port’s current handling capacity is 2.6 million TEU and after completion of the East Med Hub Phase 2 (EMH2) project, the capacity will increase to 3.6 million TEU.

Up to 368-meter (1207-feet), long vessels with a capacity for 18,000 standard containers can be currently served at MIP’s EMHI Terminal. However, the EMH2 expansion, which is expected to be completed by the end of 2022, will provide a 380-meter extension of the existing dock toward the sea and additional site reclamation.

Van Daele said EMH2 will enable the port to simultaneously serve two mega ships with a length of 400 meters and a maximum draft of 16 meters – the largest in the world.

A total of $250 million has been spent for capacity expansion, equipment and infrastructure projects and more than $450 million is planned for further investments.

“With global trade increasing rapidly, this growth shows that MIP needs to focus on new investments to meet hinterland growth and provide the necessary level of service. This growth in trade is an indication that not only the port but also the Mersin region is growing,” Van Daele added.

The capacity expansion will also enable MIP’s employment capacity. It currently employs 3,000 directly and 25,000 people indirectly and aims to add 500 direct and 5,000 indirect jobs as part of the EMH2 project.

"When completed, the project will strengthen the strategic position of the port of Mersin in the Eastern Mediterranean and add value to the region's economic development. As a result, MIP will have a strong competitive position in the container transport trade against other terminals in the Mediterranean area," he added.