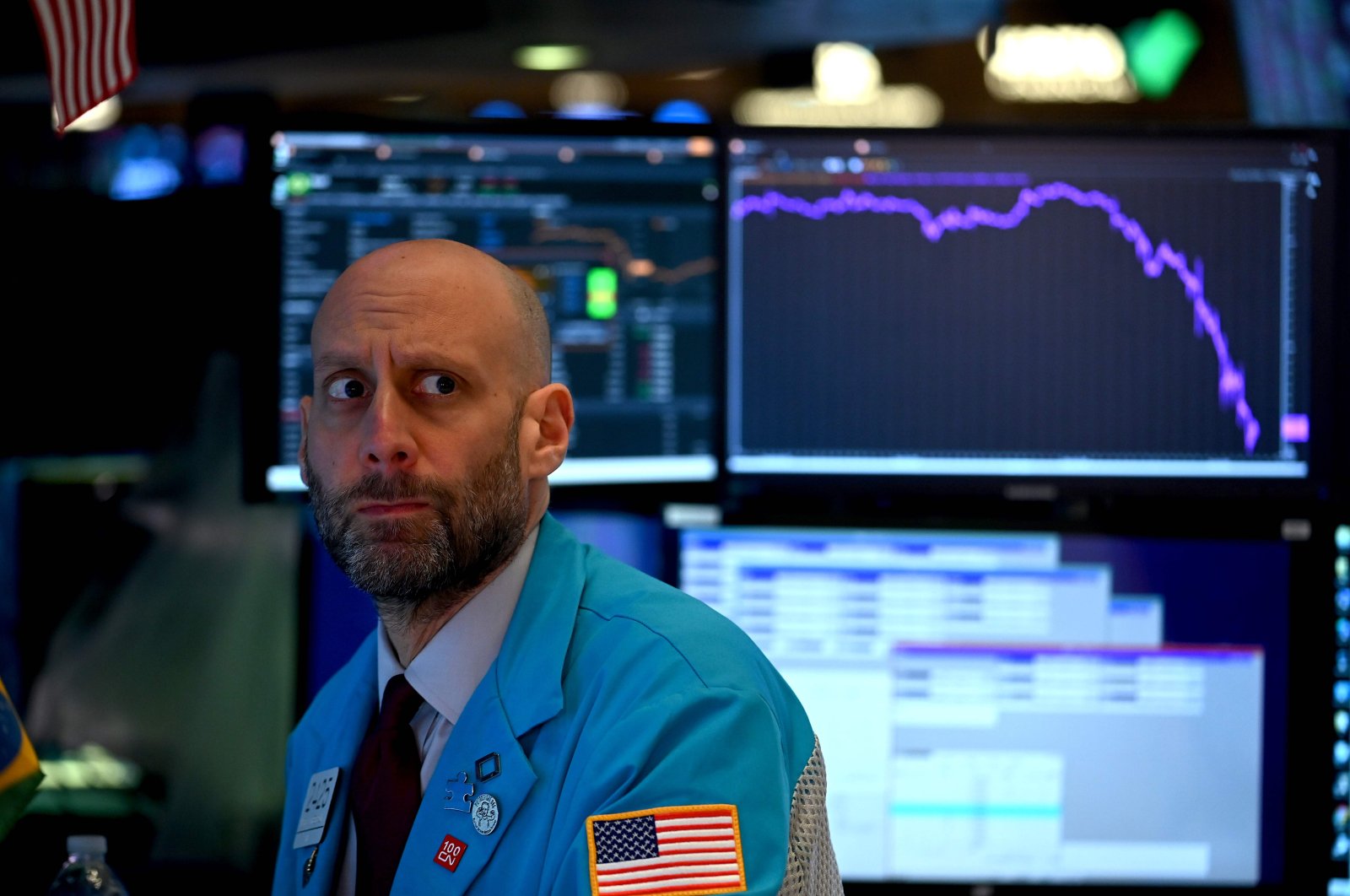 Global stocks stumbled back into the red on Wednesday pointing to more losses ahead as signs of a global recession multiply and fears that measures to support the economy still won’t be enough to avoid a sharp recession.

More and more economists including those from Wall Street’s biggest banks have declared that the outbreak has already triggered a global recession.

Some traditional safe-haven assets such as gold were also put under pressure as battered investors looked to unwind their damaged positions.

Oil prices fell for a third session with U.S. crude futures tumbling to an 18-year low.

European equity markets suffered hefty losses with London and Frankfurt down 3.5% in early trade, while Paris and Milan slipped around 3%.

"Another remarkable day in what is clearly fin-de-regime," Rabobank's global strategist Michael Every wrote in a note. "Things have already irrevocably changed and whipsaw market action reflects that this is the case. The only issue is how much further they change from here, and hence where markets settle."

Hefty losses were set to extend to Wall Street with U.S. stock futures indicating as much as 4% lower and hitting their daily low limit just a day after the S&P 500 rose 6% and Dow Jones rose 5.2% or 1,049 points.

"A rise of 1,000 points in Dow is something you see only during a financial crisis. It is not a good sign," said Tomoaki Shishido, senior fixed-income strategist at Nomura Securities. "A rise of 100 points would be much better for the economy."

Big price swings have left market participants nursing losses, making them reluctant to jump back into the market and thereby reducing trading volume.

Investors are fearful that the proposed packages to counter the impact of the virus will not be sufficient to assuage severe economic damage from a protracted economic slowdown.

The Donald Trump administration unveiled a $1 trillion stimulus package that could deliver $1,000 checks to Americans within two weeks to buttress a virus-stricken economy.

However, to get the deal past skeptical Republican senators, the U.S. Treasury warned that the country’s unemployment rate could hit 20% if they failed to act on the rescue package and there was lasting economic damage.

Goldman Sachs forecast in a note Sunday that the U.S. economy will shrink 5% in the second quarter after a 0% gain in GDP growth in the first three months of the year.

Elsewhere, Britain launched a 330 billion pound ($400 billion) rescue package for businesses threatened with collapse while France, which went into lockdown on Tuesday, is to pump 45 billion euros ($50 billion) of crisis measures into its economy to help companies and workers.

EU economy could shrink by 5%

Still, forecasters at banks are projecting a steep economic contraction in at least the second quarter as governments take draconian measures to combat the virus, shuttering restaurants, closing schools and calling on people to stay home.

European Central Bank (ECB) President Christine Lagarde told Europe's heads of government that lockdowns being imposed to fight the coronavirus pandemic could easily cause the EU's economy to shrink by 5%, the Frankfurter Allgemeine reported Wednesday.

The newspaper cited high-ranking EU diplomats who had said that her estimates of the impact of the lockdown measures ranged between 2% and 10% of the total growth.

"While markets react to positive news on stimulus, that doesn't last long. I think there are a lot of banks and investors whose balance sheet was badly hit and they still have lots of positions to sell," said Shin-ichiro Kadota, a senior currency and rate strategist at Barclays.

That lifted high-grade eurozone government bonds yield, led by Germany, where yields rose 9 basis points to the highest level in over a month at -0.342%.

Italian government bonds gained some respite after several sessions of relentless selling, with yields falling between 2 and 6 basis points across the curve.

In currency markets, the safe-haven yen gained sharply, while the U.S. dollar held onto hefty overnight gains against other currencies.

Oil prices fell as the outlook for fuel demand darkened with travel and social lockdowns triggered by the coronavirus epidemic.

The last time oil was trading that low, China had only begun its rise as a major global economic power that propelled the world’s oil consumption to record highs in subsequent years.