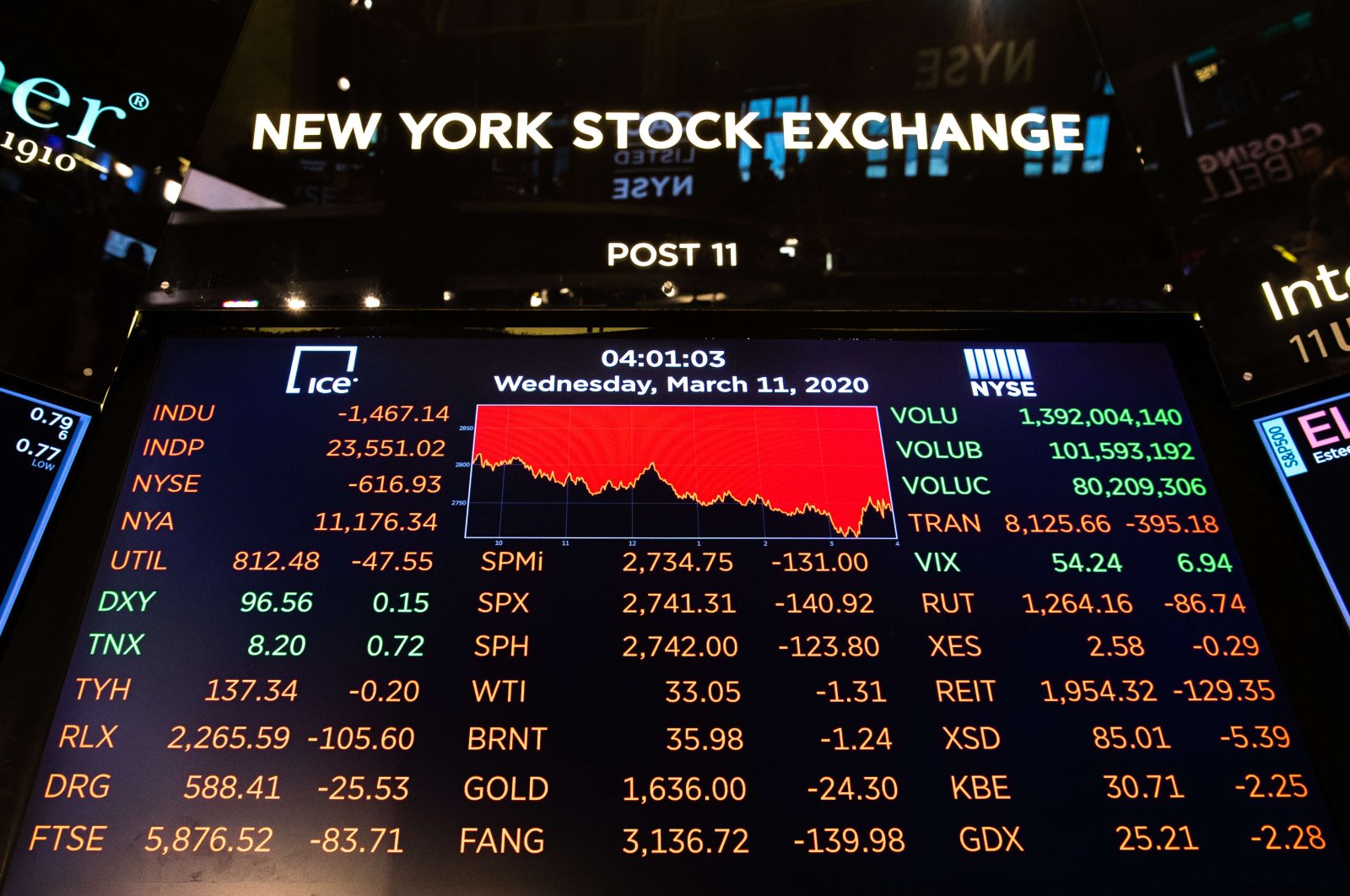 Struck by Trump’s Europe travel ban, European shares plummeted to their lowest in almost four years, while the S&P 500 and the Nasdaq cratered into a bear market. Travel and leisure stocks shed 9.9%, hitting their lowest in more than six years

Global stocks plunged into a bear market and oil slumped on Thursday after U.S. President Donald Trump banned travel from Europe to stem the spread of the coronavirus, threatening more disruption to the world economy.

With the pandemic wreaking havoc on the daily lives of millions, investors were also disappointed by the lack of broad measures in Trump's plan to fight the virus, prompting traders to bet on further aggressive easing by the U.S. Federal Reserve.

European shares plummeted to their lowest in almost four years, with the benchmark STOXX 600 index falling 6% by midday in London. Travel and leisure stocks shed 9.9%, hitting their lowest in more than six years.

The falls pushed the MSCI All-Country World Index, which tracks stocks across 49 countries, into the bear market territory, down 20% from its 52-week peak. The index was down over 2% on the day.

Trading on Wall Street was halted minutes after the opening bell Thursday as the S&P 500 slid 7% and triggered a 15-minute cutout. The indexes are now more than 24% below their intraday record highs hit in February.

Investors also rushed into safe-haven assets, from bonds to gold to the yen and the Swiss franc. Bitcoin plunged 25% amid wild volatility in cryptocurrency markets.

The VIX volatility index – Wall Street's "fear gauge" – and an equivalent measure of volatility for the Euro Stoxx 50 hit their highest levels since the 2008 financial crisis.

"He (Trump) did not announce any new concrete measures such as a large-scale payroll tax cut to buffer the economy against the impending coronavirus slowdown," said Jeffrey Halley, senior market analyst at OANDA. "That has probably disappointed markets more than anything."

Trump announced Wednesday the United States will suspend all travel from Europe, except the United Kingdom and Ireland, to the U.S. for 30 days starting Friday. He said trade will not be affected by the restrictions. Trump also announced some other steps, including instructing the Treasury Department to defer tax payments for entities hit by the virus.

"The travel ban from Europe has definitely taken everyone by surprise," said Khoon Goh, head of Asia Research at ANZ in Singapore. "Already we know the economic impact is significant, and with this additional measure on top, it's just going to multiply the impact across businesses. This is something that markets had not factored in... it's a huge near-term economic cost."

In the money market, traders further raised expectations of another U.S. rate cut, even after the Fed's emergency cut last week. Fed fund rate futures are now pricing in a large possibility of a 1 percentage point cut, rather than 0.75, at a policy review on March 17-18.

The World Health Organization (WHO) described the outbreak as a pandemic for the first time on Wednesday.

The highly infectious coronavirus that shut down most of China for much of February is spreading rapidly in Europe and increasingly in the U.S., disrupting many corners of life from education to sports, entertainment and dining.

Investors worry about the effectiveness of policies in turning around the global economy given the restrictions on daily life, travel and business.

A case in point was Britain, where the FTSE stock index hit near four-year lows on Wednesday as investors doubted whether the $39 billion government spending plan and 0.5% rate cut announced by the Bank of England on Wednesday would be enough to counter the shock from the outbreak.

In commodities, oil prices were also hit, compounded by an intensifying price war between Saudi Arabia and Russia, on top of fears of a sharp slowdown in the global economy.

The oil market was taking the decision very negatively due to the impact on jet fuel demand and expectations for business activity and economic growth, said Bjoernar Tonhaugen, head of oil markets at energy consultant Rystad.

“It leads to further loss of confidence in governments’ handling of the fallout and increases uncertainty about the extent of the virus impact on the overall economy, reflected in sharp falls in risk assets across the board this morning,” he added.

The two benchmarks are down about 50% from highs reached in January. They had their biggest one-day declines since the 1991 Gulf War on Monday after Saudi Arabia launched a price war.

Copper, seen as a gauge of global economic health because of its wide industrial use, fell to over three-year lows. In the currency market, the dollar slid against the safe-haven yen and Swiss franc. The U.S. currency fell 0.89% to 103.60 yen and lost 0.14% to 0.94 francs. The euro traded at $1.12, down 0.2% ahead of the European Central Bank's policy meeting later in the day.

The ECB is all but certain to unveil new stimulus measures, including new, ultra-cheap loans for banks to pass on to small and medium-sized firms.

The 30-day restrictions announced by Trump will badly disrupt the transatlantic traffic at the core of major airlines’ business, analysts warned, as the move hammered travel stocks already battered by the virus outbreak.

Those routes account for 20-30% of large airlines’ revenue and a majority of profit, Credit Suisse analyst Neil Glynn warned, “highlighting the damage to revenue lines for the coming weeks and potentially well into the summer.”

He added: “A ban on travel to the U.S. will likely mean heavier cuts” than the already drastic capacity reductions set in motion as airlines scrapped flights, first to China and then to other destinations including Italy as the virus spread.

Norwegian Air, struggling to stay afloat even before the virus outbreak, slumped 24.6%. Heavily U.S.-dependent Icelandair was down 18.4%.

“It’s coming at the end of the northern hemisphere winter, which is a weak period for airline finances (when) they should be sowing seeds of a strong summer season by getting the bookings in,” he said.

The fallout is also spreading fast from travel and tourism to the aerospace and other industries.

Among U.S. carriers, American Airlines could be relatively spared because of its alliance with BA and a higher share of U.K. traffic, while Air France-KLM partner Delta Air Lines and Lufthansa ally United Airlines could suffer more, independent aviation analyst Mike Boyd said.

The travel curbs will also decimate European tourists’ spending in the United States. In March 2019, European visitors accounted for 29% of arrivals and $3.4 billion in spending, the U.S. Travel Association said.