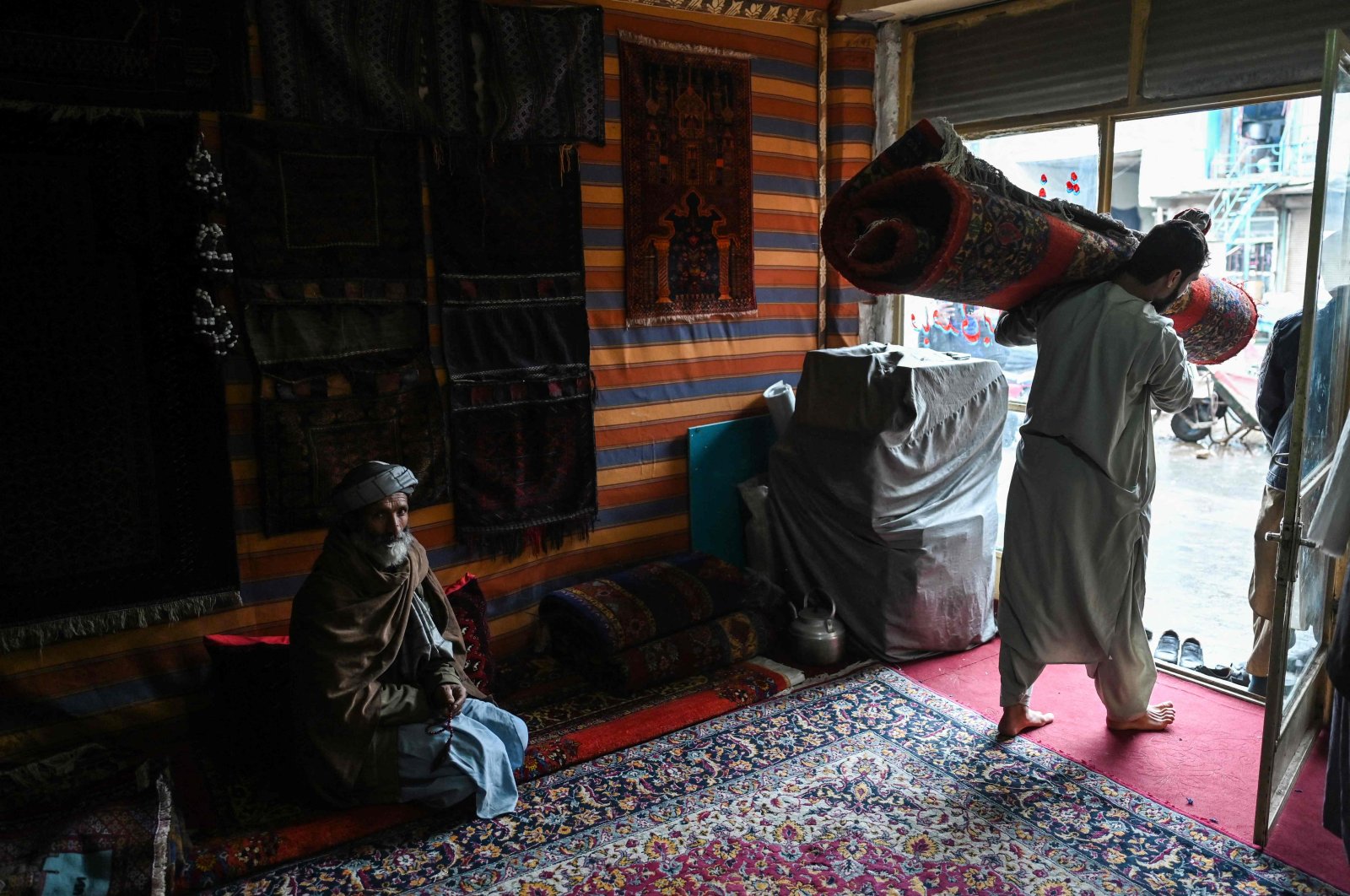 Four Afghan brothers have hauled their family's carpet loom out of storage in the desperate hope of earning a living as the nation's economy teeters on the brink of collapse.

The Haidari brothers now spend their days sitting abreast on a squat bench – as generations of the family had done before them – weaving the complex rugs for which Afghanistan is famous.

They work long hours each day, keeping a brave face even though there is no guarantee they will have anyone to sell their carpets to.

"We have no other option" to keep the family alive, said Ghulam Sakhi, the 70-year-old family patriarch.

Until Aug. 15, when the Taliban returned to power in Afghanistan, the Haidari brothers had managed to escape the backbreaking labor of carpet making and were running a successful business supplying flowers for weddings.

The hardline movement's austere interpretation of Islam, however, largely put paid to the lavish betrothals so loved by Afghans, and the family enterprise collapsed.

In an act of creativity in the face of adversity, they fell back on their family's rug-making trade.

"Naturally, when the Taliban took over ... wedding halls didn't have much business. That is why we started weaving carpets again," said Rauf, 28, the eldest of the brothers who all live and work in Kabul.

"It's a very old practice that our forefathers have passed down to us," he told the Agence France-Presse (AFP).

Now they pick strands from dangling spindles of silk before looping them into the warp and weft of the rug with precise, rhythmic energy.

Around 2 million of Afghanistan's 38 million population work in the carpet sector, according to Noor Mohammad Noori, who heads the national carpet makers' association.

But demand has taken a sharp hit since the Taliban's takeover sparked an exodus of expatriates working for international organizations, he said.

But in the past few months, "more and more people are making carpets," said Kabir Rauf, a merchant in Kabul who describes his wares as "the national treasures of Afghanistan."

He said that women who cannot go to work, girls shut out of school and unemployed men are new among the carpet-weaving workforce.

In Herat, near the Iranian border, Haji Abdul Qader already employs around 150 families for his carpet-making business.

But every day, two or three more people contact him, desperate for work. Even those with no experience get in touch.

"There are no other jobs," Rauf Haidari said.

But those who do have skills have a chance to make a living.

"Someone who knows how to weave carpets will never be without work," said Muhammad Taghi, whose family has worked with Haji Abdul Qader for a decade.

Taghi used to weave when he was younger, but now the work is left to his four children – aged 17 and 24 – who create carpets next to the stove in the family home.

It will take them 120 days to finish four matching, two-by-three meter rugs for which the family will earn around $500.

"I am proud of this work. We make in our country these carpets that will be sold the world over as Afghan carpets," Muhammad Taghi said. "I can send my girls and boys to schools and universities with this money."

His youngest son Nassim, 17, who began to weave at the age of 10, still goes to school and dreams of being a doctor. But for the carpet merchants, a supply glut brings its own problems.

Bank withdrawals are limited to $400 a week, said Haji Abdul Qader, who receives about five rugs a week. "I'm afraid I won't have enough cash to pay manufacturers."

There are also few customers.

"Foreigners are not here to buy them," complained Kabir Rauf, sitting idle in his Kabul market stand surrounded by hundreds of carpets.

The exodus of international organizations in the wake of the Taliban's return has brought "the worst time" for business, adding that he remains optimistic.

Air links to the Gulf have been restored, and from there, his carpets can fly across the world.