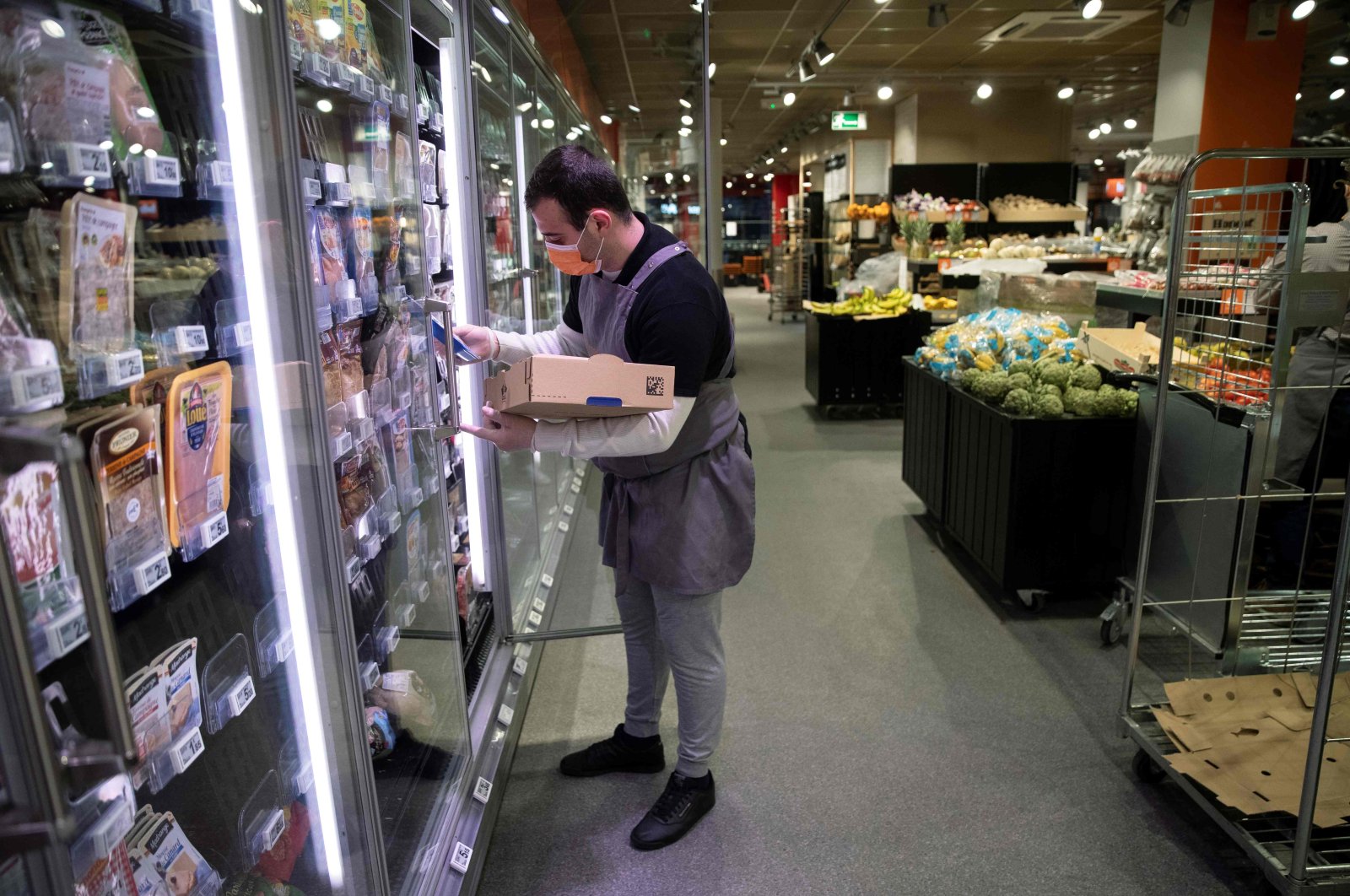 An employee wearing a protective mask stocks the cold shelves, before the opening of a Franprix supermarket, Paris, April 8, 2020. (AFP Photo)
by DAILY SABAH Apr 14, 2020 2:13 pm

Turkey, the world's largest flour exporter and second-largest pasta exporter, has assured consumers that all measures were taken to keep the food supply going as it announced a series of measures to support agricultural producers and food manufacturers

Turkey has become the second country with the highest stock levels on staples after China as countries around the world scramble to stock up on essential items due to a sharp rise in demand and disruption in supply chains due to the coronavirus pandemic, a report showed Tuesday.

According to data compiled by one of the leading market research companies, Euromonitor International consultancy, from over 1,500 online retailers across 40 countries to show product availability, Turkey’s out-of-stock levels for fast-moving consumer goods (FMCG), which include food, personal hygiene, cleaning and beauty items, recorded a low level of 1.1% in the first week of April while other European countries have seen inventory shortages as high as 31%.

China recorded the lowest out of stock level of 0.6% in the list as production in the country has started to return back to pre-pandemic levels. Meanwhile, the United Kingdom, France and Germany, Europe’s largest markets experienced a surge in online out-of-stock items, pushing the stock availability levels down by around 10%.

Özer said consumers around the world faced empty shelves while Turkey experienced no difficulty in stocking up staple items as a result of strong efforts by Turkish industries and factories, which continued production during the pandemic.

He added that the strong product availability levels compared with developed markets was made possible “thanks to our companies taking responsibility in difficult times and resuming production without any suspensions.”

Özer noted that the pandemic placed additional importance on domestic production capabilities in the country as local brands helped to ease panic buying by increasing their production capacities and making sure shelves remained full during the outbreak.

“As we said earlier, Turkish consumers should avoid panicking and only buy products that they need. The local manufacturers will continue production with determination,” Özer said.

Turkey, the world's largest flour exporter and second-largest pasta exporter, assured citizens in March that no problems were expected in the upcoming months as it has taken all the necessary measures to keep food production going. Since then, the government announced a series of support packages for agricultural producers and food manufacturers.

According to the Euromonitor, panic buying among consumers due to fears over the availability of core products is expected to persist in the U.S. and several other European countries, where the coronavirus outbreak worsens. This could put a strain on supply chains, especially in the food sector and mitigate other negative consumer behaviors, the consultancy said.

Many global retailers have put limits on purchases of products like pasta, flour, hand sanitizer, toilet paper and canned soup so that there is enough to go around. And companies like Walmart, Target and Wegman's are curbing store hours for the public in order to give workers time to restock shelves.

The U.S. National Retail Federation and the Retail Industry Leaders Association urged shoppers to restrain themselves, asking that if they didn't need an item in the next two weeks to leave it for someone else who does.

“Hoarding and stockpiling creates unnecessary gaps between the time that someone who truly needs a product can find it back on retailers' shelves," they said in a statement. "This is particularly important for our most vulnerable neighbors — the elderly and those who are struggling with other health issues.”

French officials, like those elsewhere in Europe, said there’s no reason for shortages if customers shop reasonably; however, many frustrated customers show up at stores and sometimes walk away empty-handed.