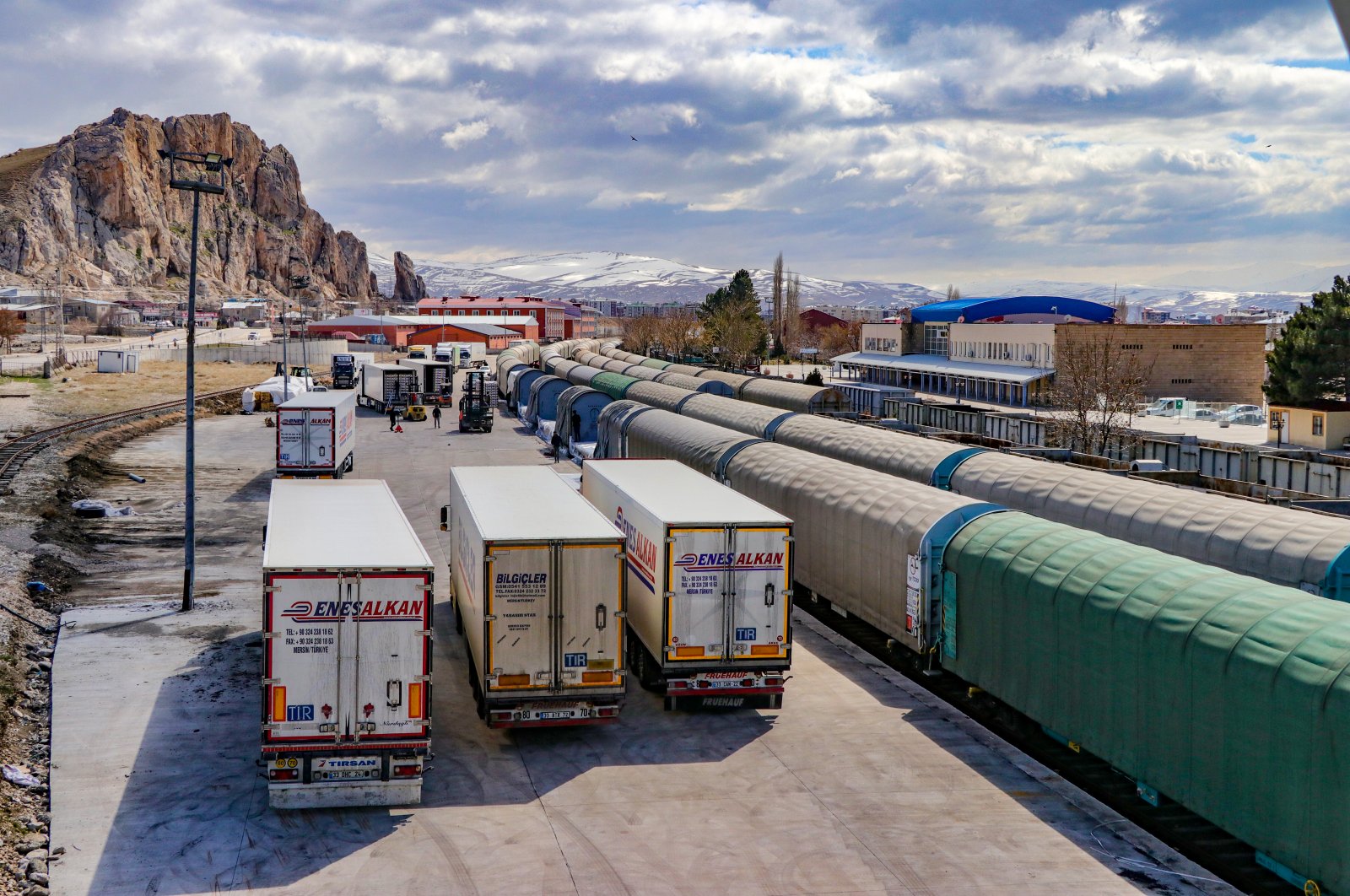 Trucks carrying goods from Turkey’s southern province of Mersin and railway cars are seen near a logistics center in the eastern province of Van near the Iranian border, March 23, 2020. (AA Photo)
by DAILY SABAH WITH AA Apr 26, 2020 4:01 pm
RECOMMENDED

Having successfully implemented contactless trade measures to minimize the impact of the coronavirus outbreak, Turkey has seen an increase in the number of commercial vehicles and railway carriages passing through its borders, the trade minister said.

To stem the spread of COVID-19, in March Turkey shut its border gates with neighboring countries, including Iran and Iraq. After the closure of Iraqi borders, the Trade Ministry implemented a number of no-contact foreign trade studies in order to continue the country's exports and imports.

"We are successfully continuing the contactless trade measures we implemented to maintain our foreign trade as efficiently as possible and with high capacity to minimize the effects of the pandemic on our economy," Ruhsar Pekcan told Anadolu Agency (AA).

Currently, Turkish drivers are responsible for bringing trucks to border crossings before their containers are received by a foreign driver who hauls the goods back through their country of residence. The vehicles are disinfected when they arrive at the buffer zone established at the customs gates before they are brought to the other side of the border.

The number of trucks entering Habur Customs Gate has reached 55,208 since the measure went into effect, while 50,386 trucks have exited.

The number of commercial vehicles passing through Habur Customs Gate to Iraq reached 1,449 on April 24, Pekcan said, adding that they were considerably close to increasing the number of crossings close to the number before the pandemic when around 1,613 trucks were passing to Iraq per day on average.

That figure dropped to 311 in the first week following the closure of borders, while it gradually increased to 779 trucks on daily basis between the period of between March 9-31 and to 1,249 between April 1-24.

The country has been implementing contactless trade with Iran via railway through the Kapıköy Customs Gate. Turkish locomotives push the freight cars into Iranian rails from where another locomotive in Iranian territory starts pulling them through.

The minister explained that transit was carried out by 289 freight cars via the Kapıköy Railway Customs Gate on a monthly basis in January and February, adding that the route had now emerged as a viable alternative, as Turkey had no buffer zone with Iran.

"While 781 freight cars passed through Kapıköy in March, this figure doubled as of April 24 reaching 1,633," Pekcan said. The total load transported in this period has increased from 27,384 tons to 41,913 tons, the minister added.

The number of trucks leaving from Kapıkule Customs Gate since March totaled some 43,213, said Pekcan. Over this period, the minister recalled that Turkey should add weight to railway transport in trade with its traditional neighboring partners.

Pekcan stressed they were currently working to use the Baku-Tbilisi-Kars line, a railway line connecting the eastern province of Kars to the Georgian and Azerbaijani capitals, Tbilisi and Baku, more intensively. Some 4,219 tons of goods were transported in January with 121 freight cars on the line, according to the minister, while the amount reached 10,194 tons between April 1-24 and was carried via 344 freight cars.

On the other hand, Pekcan emphasized that they were working to boost the frequency of trains traveling along the Halkalı-Kapıkule-Europe line, with an aim to increase the shipment via freight cars from Kapukule terminal from 35,800 tons to 50,000 tons.