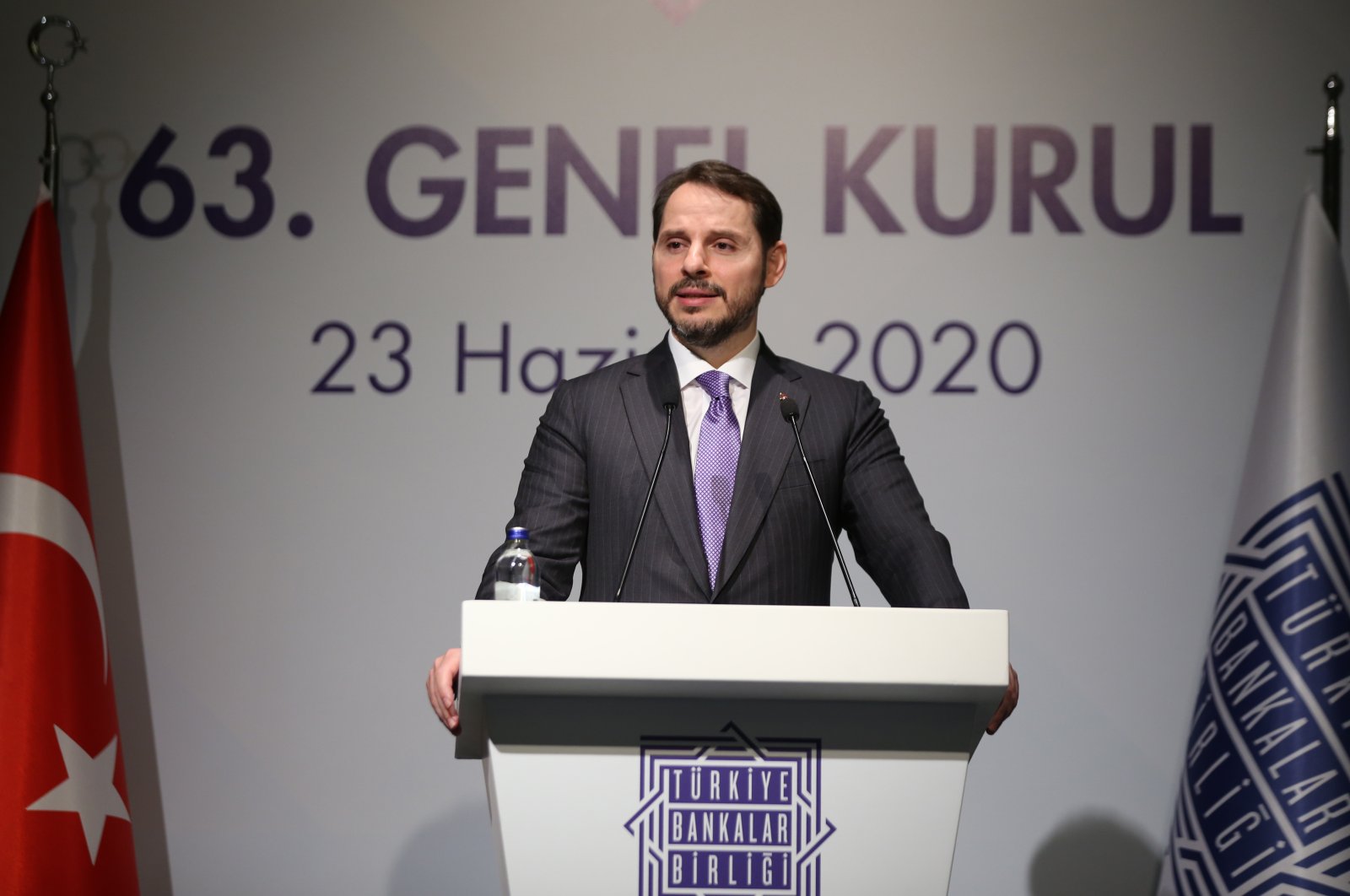 Treasury and Finance Minister Berat Albayrak delivers a speech at the general assembly of the Banks Association of Turkey in Istanbul, June 23, 2020. (AA Photo)
by DAILY SABAH WITH AGENCIES Jun 23, 2020 1:10 pm

Turkey is anticipated to come out of the coronavirus-driven crisis with a V-shaped recovery and will converge its potential growth, the country's treasury and finance minister said on Tuesday.

Addressing the general assembly of the Banks Association of Turkey in Istanbul, Berat Albayrak said the government clearly observes the recovery in economic activity.

“Leading indicators from June give positive signals for an improvement in the economy,” Albayrak said, citing growth in domestic demand and increases in consumer confidence as well as a jump in the country’s Purchasing Managers' Index (PMI).

“The early measures taken to counter the pandemic have reflected positively on the economy. We have been among the countries least affected by the pandemic. We have started to strongly see the recovery together with the normalization process,” the minister said.

Turkey’s exports increased by 24.6% in the first 21 days of June compared with the same period of last year, according to data from the Turkish Exporters Assembly (TİM), Albayrak said.

Turkey will get closer to its potential growth in a short period of time by “coming out from this process with a V-shaped recovery with the introduction of the deferred demand, improvement in expectations and measures taken by stimulus packages,” he explained.

A V-shaped recovery is characterized by a quick and sustained recovery by measure of economic performance after a sharp economic decline.

Considering the PMI figures the European Union announced in the morning, he said they also reveal that the recovery in June is also strong with Turkey's trading partners.

"These developments show that the recovery in exports has started," Albayrak stressed.

Turkey started to ease restrictions aimed at reviving the economy as of May and further relaxed them at the beginning of June as it advanced in its fight against COVID-19.

Albayrak said the employment package that the government is working on will continue to strongly reset the economic recovery process in the coming period.

Ankara earlier this month said it was working on a comprehensive employment shield package to support jobs affected by the pandemic, with support also on the way for industries to maintain export and production-oriented growth to revive the economy amid the outbreak.

The government also recently announced it would extend the three-month ban on layoffs that were imposed in April for another three months to offset shuttered businesses and unemployment. Under the allowance to bail out firms amid the coronavirus lockdown, the government pays 60% of staff salaries for three months within the ranges of TL 1,752 ($257.74) to TL 4,381.

The fiscal support under the relief package the government announced in March to cushion the economic fallout from the outbreak has exceeded TL 280 billion, Albayrak said.

The minister also announced that applications for housing loans, enhanced by packages recently introduced by the country’s three public lenders, have exceeded 133,000 and that over 100,000 citizens took out loans under the low-interest mortgage campaign with total placements at around TL 25 billion. Ziraat Bank, VakıfBank and Halkbank extended four new loan packages on June 1 to invigorate the transition to post-coronavirus normality and revive social life.

Albayrak also referred to leading indicators, saying the capacity usage in the manufacturing industry rose to 62.6% in May, up from 61.6% in April, while the economic confidence index jumped from 54.9 in April to 59.5 in May and 62.6 in June.

The country’s Purchasing Managers' Index (PMI) for the manufacturing sector rose to 40.9 in May, up 7.5 points from 33.4 in April, the minister added.

“The annual growth of the total exchange rate adjusted loans, which gained momentum in the first quarter of 2020, was also strong in May, reaching 27.3%," he added. “When we look at credit expenditures, credit card expenditures and consumption expenditures, we see that this trend continued upward in May and June, compared to March and April.”

‘Speed up restructuring of loans’

As of April, the industry's annual return on equity is around 11%, he noted. In the same period, the legal minimum with a capital adequacy ratio of banks is 18.6%, much above the 8% threshold, he said.

He also proposed the banks to revisit their old practices and refresh themselves to adapt to the changes in the post-virus era.

"We expect you (banks) to perform work more compatible with the development goals of our country," he stressed, asking the lenders not to prioritize short-term profitability

Albayrak advised banks to speed up the restructuring of loans and said the government would support the formation of an asset management company to take on loans of problematic companies from all banks.

He said the government was aware of plans by banks to set up the asset management company, adding that it should have an effective model.

Albayrak also stated the government has gained a market surveillance capability that has not been seen in Turkey's history.

"Our regulatory institutions have reached a level that will not hesitate to take any necessary precautions against every attempt that will threaten the financial and economic stability of our country," he concluded.